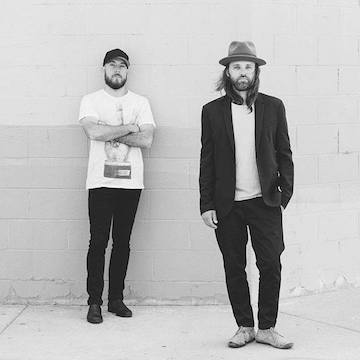 The Federal Empire, a band made up of Chad Wolf of the multi-platinum-selling band Carolina Liar  and Grammy nominated songwriter McKay Stevens, have released a video for “I Never Liked Your Friends,” which features BooBoo Stewart of Twilight and the adorable Lindsey Stirling .  The duo that would become The Federal Empire came together to write songs for other bands, but decided the pairing was to monumental not to keep some of the material for their own project (**shrugs**).  One of those song was “I Never Liked Your Friends” from their album The American Dream.

“We realized the songs meant something more to us than just ‘cuts,’ so we came up with the name The Federal Empire because we were doing these huge gang vocal arrangements and there is a definition of federal that refers to the meaning as a public place where many voices can come together to form one,” Wolf adds. “To us, that was everything we were doing, and if this was going to be a band, our intention was to bring people like us together and laugh about our lives.”  “It’s super lowkey, where we will meet up at someone’s house and just talk about life and relationships and then get into the writing,” Stevens says of the group’s sessions. “All of these are true stories and come from authentic places of what we’ve been through.”

The video also marks the official launch of The Federal Empire’s partnership with Sumerian Records, home of Payale Royale, Asking Alexandria, Circa Survive, Bones UK, Night Riots, and others.  A deluxe edition of the duo’s debut EP, The American Dream, is also coming soon via Sumerian Records.  You can follow The Federal Empire and stay up-to-date with upcoming music, band and tour news via the following links: