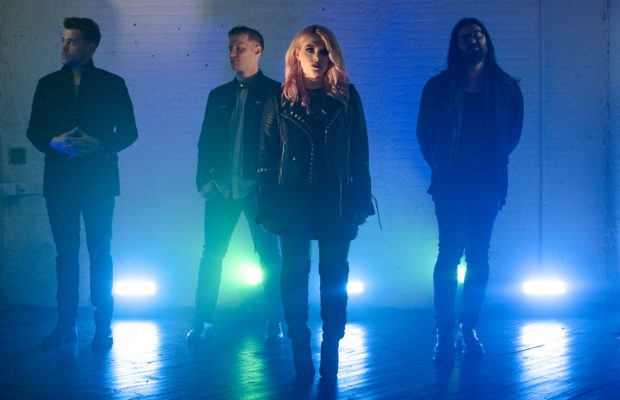 Philadelphia indie-rock/electronic band June Divided have reinvented themselves on Body Talk,  their upcoming debut label EP.  Having signed with Revival Recordings in 2018, the band now has a good team of people supporting them in their musical endeavors.  Counting Mutemath, Cold War Kids and Metric as influences, the band consists of Melissa Menago (vocals/keyboard/guitar), Chris Kissel (guitar), Keith Gill (drums) and Lenny Sasso (bass).  The band has worked hard over the years through constant touring and festival appearances to reach a wide audience, gaining new fans and recognition along the way.  Menago and Kissel formed the band in 2011, fresh out of college, and found immediate success, performing festivals such as SXSW and Warped Tour, as well as national tours and local shows.  Although the band had a great deal of success from the start, they never had the time to ask themselves what kind of artists they wanted to be.   In 2014, the band decided to slow down and took a break to write new material and figure out what they wanted their sound to be.  The break paid off, and the band evolved from an alt-rock style of music to a more Mutemath-inspired indie rock sound.  The band is now making the music they want to make and have re-emerged better and more solid then ever.  Staff writer Emily May spoke recently via email with Menago, discussing the upcoming album, their evolving sound and what’s next for them.  You can stay up-to-date with the band and all upcoming tour dates and album information, as well as stream and purchase their music and watch their videos on their website, Facebook, Twitter, Instagram, Bandcamp, Spotify, SoundCloud, iTunes and YouTube.  You can pre-order their new EP here!

Your debut label EP Body Wars will be released on August 24th. What can you tell me about the writing and recording process? How did the making if this album differ from previous releases?

We changed a lot. We were ready to grow from our past releases. We took a long time writing it and must have worked on 20 songs that we scrapped before deciding on Body Wars. We got new instruments and demoed up the record and really took our time to make sure the sound was representative of who we were as artists. There’s more texture on this record, more electronic elements, and even though the songs are poppier than our previous releases, we tried to think more outside-the-box.

You produced and engineered a couple of the tracks from the EP yourselves. What led to that decision and what was the experience like?

The recording process took a pretty long time. More songs were written that we really wanted on the record, so we took matters into our own hands and did “Pluto” in my living room. We rented a studio for “I Didn’t Mind” and did that one ourselves too. Our demos before recording were really detailed and produced to begin with, so we were curious to take the reigns and see how we’d do on our own for a few tracks.

I read that the making of Body Wars led to changes for the band with the addition of new instruments and sounds. What prompted you to experiment more with your sound on this album? As a classical trained pianist, how does it feel to be playing piano/keys again?

It feels great and I love that I get to play both now! I used to write our old material strictly on guitar, and I realized it was keeping me in a rut. I was getting more into electronic and indie-rock artists so I turned over to writing on piano as a way to break the writer’s block, and it worked. I actually wrote most of the record on keys after that. I think that was a pretty big part of how and why our sound shifted so much.

You mentioned that the band was on it’s own for a while but that it was time for the band to grow with a team on your side. How have things changed for the band since signing to a label? What led the band to sign with Revival Recordings?

“Good music by good people” is Revival’s motto and it’s great having a team of good people supporting you. As an indie artist, there just comes a time where you’re like, ready to expand the fam. The biggest change I’ve noticed is organization. There’s more people to keep watch over things, which is nice since we were originally used to just the 4 of us handling everything for so long.

You and Chris met in college and decided to write together, later recruiting your drummer Keith from Craigslist and then Lenny on bass. None of you had rock star aspirations, though, and just wanted to make music. Your dream of being in a rock band has slowly evolved upon realizing how much love and support you have from your fans, friends and family. When you realize, as a band, that you wanted to pursue music seriously?

Chris and I studied music in college, so we always wanted to pursue music seriously. But we were studying mostly behind-the-scenes kind of stuff, like production, audio engineering, composition, etc. I was always kind of stage-shy but I ended up singing for the band because I had always been a singer-songwriter at heart. It took a long time (plus the love and support from everyone) for me to embrace that “front-person” role though. I’m so glad I did because I’ve learned a lot about myself ever since. I’m a completely different performer than I was years ago, and I think we all are.

What kinds of lessons have you learned over the years from being in the industry? How have you grown, both individually and as musicians?

We could probably fill a novel with lessons learned over the years, haha, but I’ll say this: Everyone says this is a tough industry. Magnify that statement by 100000%, and it’s still not enough to prepare you. But just keep going. We’ve grown, become better friends and learned a ton by doing just that.

You released a solo album in 2016 of songs that didn’t quite fit with the sound of June Divided. Do you have plans to release more solo albums in the future?

Yes, Little Crimes was a folk record that Chesky Records approached me and asked me to do. Keith and Chris actually played on it too. I am definitely always thinking of more projects because I write so many songs. Lately, June Divided’s album release is keeping me crazy busy, so I’m not sure what’s next for my solo career just as of right now.

I saw where you are adding incentives to fans who pre-order the album or pre-save it on Spotify. How has the response been? What can you tell me about the Body Wars B side tracks, a few of which are available with album pre-orders?

It’s going great! There’s also tour guest spots, a signed ukulele, and Keith’s hand-made beautiful Edison-bulb style lamps with our logo on it- all up for lucky winners. You are entered to win automatically with the pre-order purchase! I don’t want to give too much away about the extra tracks, but they do hint at something coming from us later down the road. Right now, they are exclusively available with the pre-order. Here’s the pre-order link: https://ffm.to/junedividedforthewin

I read where you mentioned that the band was kind-of thrust into it’s early experiences and didn’t have the time to ask yourselves what you wanted to be as artists. In deciding to slow down and craft new material, do you feel you have found what kind of artists you want to be? What was the songwriting process like during this period of figuring out what you wanted the band’s sound to be? How did it feel to start making the music you wanted to make as a band?

Oh yea, we definitely feel more like our own, unique selves now. Not that the old material wasn’t who we were at the time, but we were a lot younger then. Once things settled down after the earlier releases, we finally had time to experiment and look ourselves in the mirror and ask some serious questions. Once we set out to change things up, the songwriting process was kind of a war zone at first. Oh man were there fights. Some of us wanted to change, some of us initially didn’t. I was scrapping songs left and right, and that was hard on some of the guys for sure, since they put so much work into everything. I think the thing that kept us together was that we were all determined to land on a sound and a vision that we all loved. Somehow we made it out alive, as the same band, with the same lineup. Anyone who’s been in an evolving creative project knows that is no easy feat. Chris, Keith and Lenny are true gems and I am lucky to have them as creative partners and as friends.

You all have settled into jobs while remaining flexible and touring when needed. You mentioned that if you had not all taken time for yourselves you would probably not be in a band right now. How has taking time for yourselves helped you as a band? How did you find that band/life balance? Did you ever feel the push to keep going and find it hard at all to slow down or was it an easy decision to make?

I don’t think it was really a “decision”, I just think it happened naturally because it really had to. After touring slowed down, quite a few of us got better jobs. After a while, shitty retail jobs can’t cut it anymore, especially as you get older. The time we took for ourselves also gave us more time to settle into healthier personal lives too. You can’t thrive if you don’t take care of yourself, and I absolutely credit that as part of the reason why our band is still here.

Body Wars is out everywhere on August 24th and we kick off our tour with Shane Henderson (Valencia, Promise of Redemption), that same day. We’re currently working on plans for the end of the year, and we absolutely want to make another record in the future. Follow us on social media to keep up!