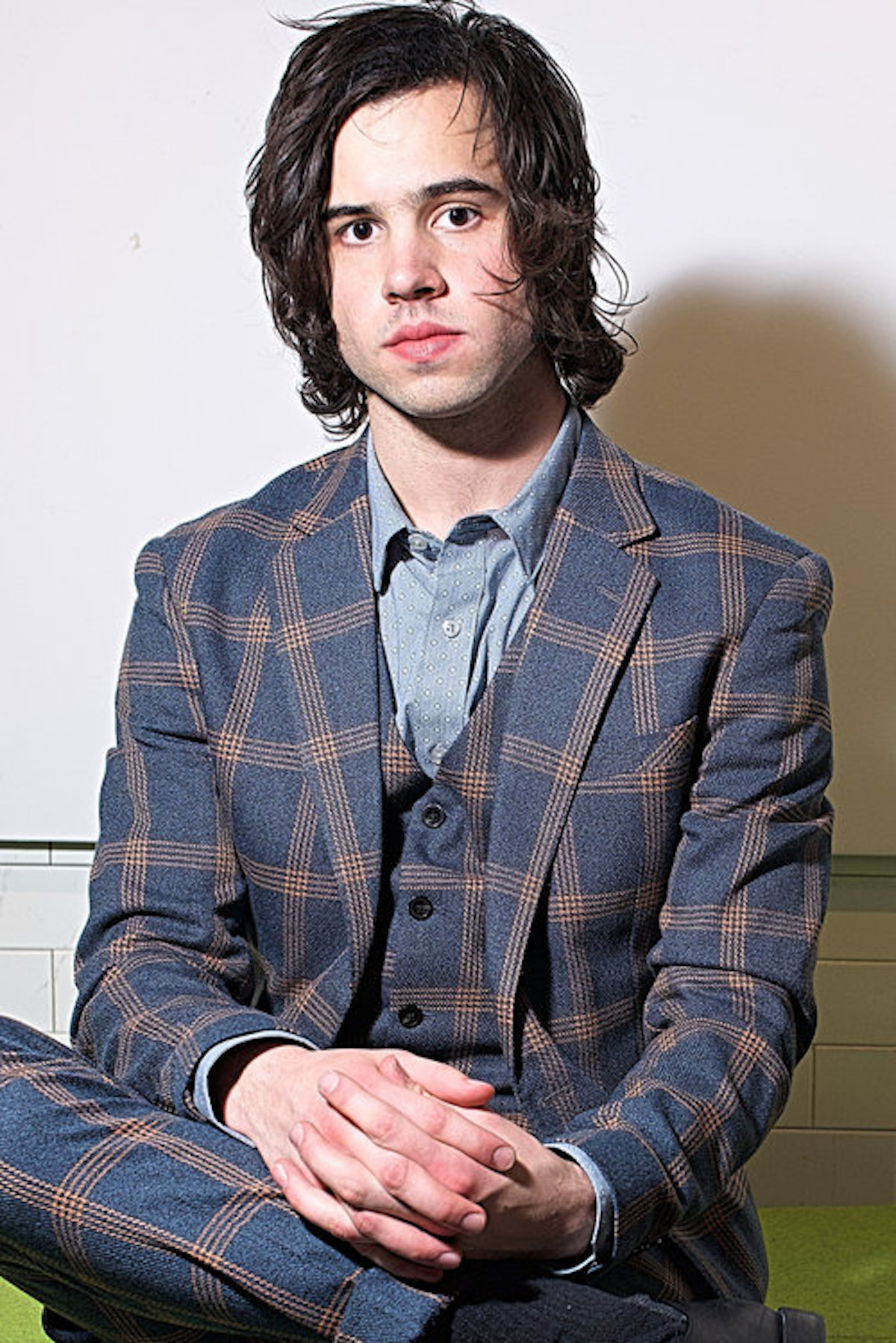 Iowa based singer/songwriter/multi-instrumentalist Jake Kemble began songwriting as the frontman for his rick band Kick, having released two studio EPs and played hundreds of shows over the years.  Kemble started playing the guitar in high school and, at the age of 19, moved to the Twin Cities to try to make it as a musician, experiencing a lot of growth during that time and learning many important lessons.  With musical inspirations that range from My Chemical Romance to Maggie Roagers and The Struts, Kemble has explored a wide range of sounds over the years.  Aside from his rock band, he also performs solo with his latest acoustic project.  Formerly performing with fellow musician Halen Becker as Kemble The Band, the two have since parted ways, with Kemble forging ahead on his own.  He recently released his new solo EP Take This Hurt and has a national tour in the works for 2020, with tour dates to be announced soon!  With plans to perform solo and with Kick next year, make sure keep an eye out for tour dates!  You can follow Jake Kemble and stay up-to-date on all upcoming artist, tour and music news, as well as stream and purchase his music, via the following links:
Website | Facebook | Instagram | Spotify | iTunes/Apple Music | YouTube | Deezer | Kick Bandcamp
You started playing guitar in high school and writing songs in 2012.  What led you to want to learn the guitar, as opposed to a different instrument? What was your songwriting process like when you first started writing songs and how do you feel it has evolved over the years?  What inspires your lyrics and have your inspirations changed over the years?

I first started playing around with a guitar because my uncle Dave put on a show called disco Dave, where he would dress up like Elvis, Jim Morrison and Buddy Holly and play fun cover versions of their classic songs. There was usually a guitar laying around and I think I remember picking it up quite a bit and thinking that it was an awesome instrument! My brother Sam had a guitar later on and I ended up playing around on that which led to me asking my parents for lessons. The first music that I latched onto was My Chemical Romance and Buckcherry.

What can you tell me about the cover band you were in when you were 16 years old?  You have said that you knew then that music is what you wanted to do.  Having been in several different bands/projects such as Kick, Boomtown Riot, Kemble The Band and your current solo project, what has inspired your exploration of different sounds throughout the years?  What do you enjoy about playing acoustically vs with electric instruments?

The cover band at 16 was called “off the rocker”. I played guitar, Adam Dooley played drums, Aaron Harris played bass and Kyle Jorgensen fronted. We played covers of Lynyrd Skynyrd, AC/DC, Led Zeppelin and other music like that-it was always rock-based and a little bit towards the southern rock style.

Most of the time songs just pop into my head – melodies and little snippets of riffs and things that I’ll pull out my voice memos and record, later pulling them together into a full song. I can’t really tell you how many times that I’ve sat down to write…  The new music is just constantly cranking up there in my head.

At 19, you moved from your hometown of Panora, IA to the Twin Cities.  What was that experience like for you and how did moving from a more slow-paced environment to a more vibrant music scene shape you both personally and musically?  Did you learn any especially important lessons or receive any good advice during those early years?
Going from a graduating class of 60 to a much higher populated area, AKA Minneapolis suburbs,  was one of the hugest shocks to my nervous system and emotions… I experienced a lot, and learned many important lessons and good advice from friends who are very important to me- like, my great friend Shane Berquist at Precision Acupuncture, who introduced me to the importance of putting health and spirit first and letting other things follow.
Who were some of your early musical inspirations and who are some current bands that you are listening to and bands that inspire you today?  Are there any bands out of Iowa right now that you are especially excited about?

My first favorite band was probably My Chemical Romance-my mom wouldn’t really let me download the songs unless I printed out the lyrics – so, on some of the inappropriate ones, I would copy and paste the lyrics into Microsoft Word and change them a bit so that they would be acceptable for me to download.. love you mom!  I later on was hugely influenced by Foo Fighters and Dave Grohl. He will always play a pretty huge role in my life and is a huge reason for the way I present my craft and songs.

My favorite new band is by far the Struts. They set the bar for rock music right now and I crank to them everyday. I hope they read this so they know that I think they’re doing everything right and that I always want more Struts! I am also a pretty big fan of Maggie Rogers- I was in the front row for her set at Hinterland, IA  this year – great set!

A couple of my favorite Iowa artists are Brenton Dean (Holy White Hounds and Soak The Master) and Eli Clark (Other Brothers). I like pretty much every single thing that those guys do and always looking forward to their new releases.

Before your current solo project, you had formed the duo Kemble The Band with Halen Becker.  What can you tell me about meeting Halen and forming the duo with her?  What led the two of you to decide to instead focus on your own solo projects?

Halen and I were introduced by my friend and kick bassist Adam Dooley. After a year or so of dating, we moved in together and after about a year of living together, we started working on music together – drums first. A few months into learning, she was playing a full drum kit/singing live at shows and we were rocking out using backing tracks. It was fun. A few months of shows in this style and she decided that she would like to play guitar more and to be upfront which ended up being the most solid version of “kemble the band”,  in my opinion.

After about a year of playing , Halen decided that she wanted to take a break from our relationship, which led to the end of our personal and musical relationship.

What can you tell me about Professional Music Center in Iowa and your role at the shop?  They sound like an integral part of the community, with classes/workshops, different events and seek to nurture and inspire young musicians!
Professional Music Center is a locally owned music store in Clive, Iowa by Trent Litten. Trent mostly specializes in guitars-new and used, vintage and brand new. My role there is general sales and social media. None of Trents employees work on commission which creates a great and fun working environment.  Working there has been a very huge deal for me because I have learned tons of things about gear, social skills, how to be prepared and how to communicate fully. Pro music does indeed nurture and inspire young musicians!
You recently released your new EP Take This Hurt.  What can you tell me about the writing and recording of the EP?  Did you have a certain sonic vision for the songs going into the writing for the EP?

This release was started over a year ago with the song “While I’ve got you by the ear”. I was introduced to Brandon Darner by my friend Josh Davis and Brandon was kind enough to agree to doing a track with me which was originally thought to be a single. We ended up working really well with each other and this led to us recording “work this thing out” at Magic Barn Studios. I had a really special experience especially during this song in the studio – an overwhelming feeling of comfort and well being brought on by the music and the space we were in.  Brandon and his engineer/assistant Micah Natera bring music to a new level.

Halen and our breakup inspired me to immediately record “Take This Hurt” and add it to the EP .. this song had previously been written but was never recorded.. “The Color Dark Blue” was also previously written and recorded with Producer/engineer Adam Szczepaniak in MN – but I wanted to have the track remix/mastered and to bring it on this release to further express what I was/am going through.

The EP is meant to be listened to loud and I am hopeful that it can be therapeutic for people who are going through emotional turmoil and find some comfort in this music.

You’ve said that, with regards to “Work This Thing Out”, it is your hope that even if a listener can’t understand the text or meaning of the song, they can still feel the spirit and expression of life through your melodies and accompaniments.  Is your goal to approach all of your music in this way?  What do you hope people take away from your music?

The lyrics are important but most of my music is focused on the melody and sounds and vibrations.

I am writing new songs every single day. It is my goal to always have a new release date on the calendar. I am working hard so that I can be in the studio multiple times a month for both my rock band Kick and my solo music. I plan to play many shows this year solo and as Kick and to connect with everyone on earth who likes music! Thanks for reading and Rock out!