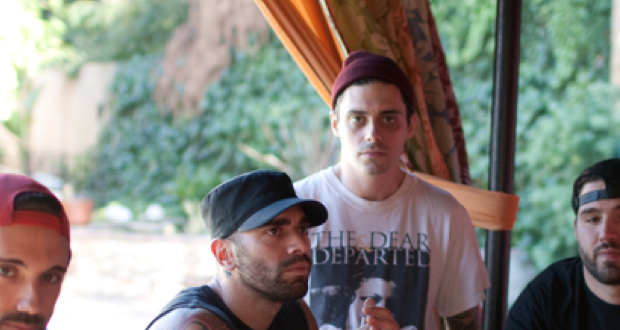 How was the recording process for Black Mass?
It was awesome. We love being able to work with Tomas Costanza and the entire crew at Killingsworth. We were able to get the sounds we wanted and nail everything down the way we wanted and get it all done in a timely fashion while having a blast doing doing it.

What are some goals you have for the band?
On a grand scale, world domination, the ability to go to any WWE show for free, the chance to join the Yankees at any point that I feel like, that type of stuff. On a realistic scale, I just want to be able to continue writing and playing music and touring throughout the world. Having a good time doing it while being able to make ends meat. I would like to be able to open people’s minds with our music and lyrics and play our part in bridging the gaps between hardcore, punk and metal.

Have you thought about which song off of Black Mass will be the next single?
We chose Black Mass to be on the internet first because it’s the title track and the haunting intro was perfect for the initial launch of the allrisefortheblackmass.com teaser site. As far as which song we give out next, it’s up in the air. It’s hard to view songs as “singles” for us because we’re not always guaranteed the option of doing a video and even if we do, that usually doesn’t mean anything more than a youtube video existing. There is no 7″ singles really anymore or CD singles etc.

Where do you draw inspirations for songs?
Lyrically songs come from life. Cliche answer but its true. Very rarely do I even feel the urge to write about something that isn’t relevant or related to my life or experience, let alone actually going through with it. The injustices I see based around race, sexual preference, ethnicity and the like played a major part with this album. Grudges and disputes both new and old as well. Musically the inspiration was all over the place. I’ve been listening to a ton of thrash and crossover so obviously that shines through. I was brought up and learned to play guitar with metal and thrash and crossover so it was a lot of fun really letting those influences come to the forefront.

The album cover for Black Mass, from what I believe, is the Statue of Liberty surrounded by snakes. Can you please explain to us what is the meaning or significance of the album cover?
In a nutshell, without giving away too much or ruining anyones interpretation of the art, the concept was to show the degradation of what our society holds dear and how things that are symbols and pillars of purity have all been corrupted. Everything has become and evil version of what it once was and what it initially stood for.

What advice would you give to youngsters who want to start writing music?
Write music, play music, get good at your craft… don’t go to college if you don’t actually want, don’t let everyone tell you you must get into the 9-5 job routine to survive because you do NOT need that. Life is difficult without steady money but its not impossible. You have to give up the certainties provided by the “grown up regular life” but the rewards of playing music are far superior. You should live first and foremost, instead of getting into the work to live, live to work bullshit.

How old were you when you became interested in music? Do you believe that your music career will take you far in life?
I’ve never NOT been interested in music. My first memories of life are based around music. My first favorite band was Def Leppard based on the Pyromania album. That came out in 83 i believe… i was 3 years old. Music has taken me all over the entire world so far and I’ve lived 31 years without working a boring routine job. That’s pretty far already in my opinion. Will I ever make a ton of money or become famous? Doubtful. I’d love to make a ton of money but it’s not the reason why I do this and its not really a goal. Like i said earlier, if i can make ends meat and live while doing music, I am very happy about my position in life.

What is the Long Island music scene like? Was it hard to gain attention when This Is Hell began?
The scene here is a bit more closed off than other scenes. Unfortunately thats becoming a bit of the norm throughout the country. With the influence of the internet, the distinction between different cities scenes are slowly fading away. There is so much “these few people in the world say this band is cool and this one isn’t so we just follow their lead” going on and less “I like this band and that band and will support them despite what the tastemakers say.” That thought process is bullshit. What’s even worse is that the people that fall into the trap of following the leaders NEVER think they are doing that. It’s painful talking about that type of thing with people that are in that mindset and they have no clue they are falling into that shit. Pathetic fucking sheep.

Are there any cities or countries you haven’t visited yet but would love to play in?
Any place we haven’t been yet, we want to go to. Hopefully this coming year we will be able to make places like South America and the far east a reality!