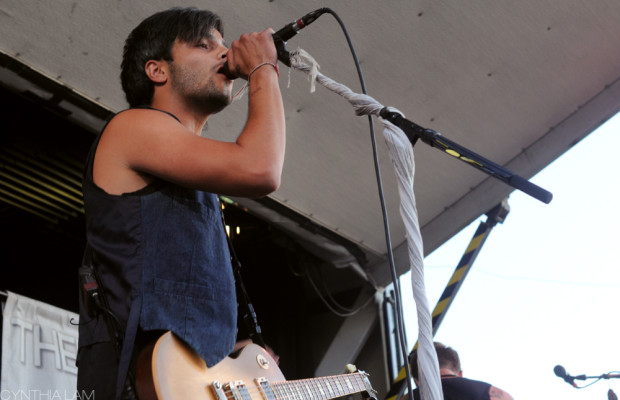 You guys released a new album called The Verge in June. In what way has the band evolved from A Little Faster to The Verge?
The period between the first & second albums had some very pinnacle points for a band. Much of our time during tour was spent just learning from our experiences we were taking in around the world. We began to play in places we only dreamt of playing just a few years ago. We began to realize the true nature of our band & I started to really come into my own as a lyricist/ writer as well.

What was it like being able to work with Michael Elvis Baskette?
Elvis was the best possible fit for how we wanted to go about producing this album. We didn’t know this before working with him, but it was so smooth how the process went. He helped bring the best out of us, much like the invisible 5th man of the band, as opposed to dictating.

Did you face any new challenges while recording this album?
Not really. The whole thing came together pretty dream-like. We easily get caught up in being overly selective, but this time around we didn’t want that.

What does ‘The Verge’ mean? Is there a concept behind this album?
The phrase just captures what happened & what we were thinking when making the music. We felt as though we were approaching something insanely great, but we had no idea what that was. There were no pre-conceptions going into the studio, so there was no clear image of what we wanted the end product to be. It just came. Yes… came.

Listening to the album I can tell that you have developed musically. What made you decide to go in a new direction?
The sound of the album is the sound of us letting go. We needed that. It’s helped us solidify what TFT is, or get closer to that anyway. If you over produce & get caught nit-picking, you start erasing the raw magic that comes from musicianship. Then you start to sound like a Katy Perry record. We might do that on the next one though, cause we wanna get rich.

What are your thoughts on illegally downloading music? Do you see it being the downfall of the music industry?
Ahhhh, this question! It has definitely been the game changer for all of music & game changers are not downfalls. No one knows yet. As soon as the new formula is figured out & re-programmed, internet piracy may be a blessing. Who knows.

What are the biggest challenges that you’ve had to face as a band?
We’ve realized that in order to be what we want to be, we have to always be inspired. If we’re not inspired, we back off & hold some bait out so it’ll come back. This is what happens to many artists & creative people. They get discouraged because they’re “greatest work” isn’t appreciated, so they dial back & create kids bop tunes or something of the like. We hope to not create kids bop tunes. Just NOW that’s what I call Music compilations.

This past summer you played on the Vans Warped Tour. What was this experience like?
It’s crazy to see what is taking place, but change is very necessary. Let’s just say, the last thing you would think should be popular is popular & the things you think should receive endless praise, you might as well stop praising. It’s a learning experience to see what kids these days react to. Our fans KILLED it though. Amazing experience.

Are there any specific dates or shows that stood out to you during the tour?
Uniondale, Hartford, Pomona all had that real extra feeling involved outside of just having a lot of people there. There were a lot of die hard people there. AND we didn’t play at the same time as ADTR, which is always nice. Love those guys, not just because they murder everyone on Warped, but because they’re actual homies.

Growing up, did you attend Warped Tour? What were some of your most memorable moments going as a fan?
Playing the Orlando date as a 14 y/o in 2004 was pretty incredible. We were all massive fans of quite a few bands that were on the bill that year. We snuck in to the back area & played the BBQ un-announced. That was pretty bad-A.

Do you have any plans for the fall?
We’re heading out on tour with our good friends Mayday Parade & You Me At Six. Shall NOT be one to miss!