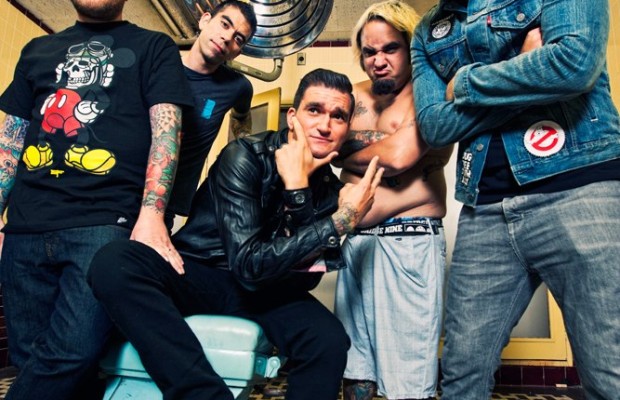 Your new album Radiosurgery is due October 4th, it seems like you guys are your pop-punk roots on this record. What else can you tell us about the album?
We basically tried to musically like bridge a gap, that’s what Chad, our guitar player says. Bridge a gap in this new podern pop-punk, if you want to call it. We’re going back to some of the records we grew up on like Green Day’s “Dookie” and “Kerplunk” and even the Ramones, The Descendents and bands like that. We put elements of that king of music and make differences. We’re trying to bridge a gap so people can see where the music came from. Sonically, that’s what the record is about. Lyrically, it’s about relationships and dealing with relationships, that’s what we do best.

What was the recording process like?
This time around, it’s been a lot more fun I think. That’s mainly due to fact that we worked with Neal Avron again. He did three of our previous records, our self-titled record, Sticks & Stones and Catalyst. Those are actually commercial successes. Neil’s like the sixth member of New Found Glory, it’s really easy for us to work with him, Neil can say what he really feels and really gives us his opinions.

Was there any pressure at all on this record?
there was pressure but I don’t think there was more pressure than in the past. It was more relaxed because we were working with Neil and the whole environment. It’s out second record on Epitatph so we’re working with the same people. We try not to put that much pressure on ourselves when we’re writing a record, we just write about our lives. We write music we enjoy playing.

What are some stage antics you guys get up to on tour?
It all depends on the tour that we’re on. A lot of the times, we tour with bands that we’re friends with so that we’ll have fun on and off stage. Let’s say when we’re off stage before and after a show, there’s a lot of random trying to find restaurants that we all love. Some of the kids at the shows will know where to go after a show. Sometimes we play pranks on the bands on tour. Set Your Goals are going to be on the Pop Punk’s Not Dead Tour. We’ve toured with them in the past and we’ve done things like throw smoke bombs on stage while they played. Sometimes jokes, sometimes we hang out, a lot of good times.

You guys filmed the music video for “Radiosurgery” at the Linda Vinda Community Hospital where Nightmare on Elm Street was filmed. What was that like?
Oh yeah, I didn’t get that because not many people even know what the name of the hospital is, it’s just the hospital. It’s a really famous place to shoot anything like videos or movies. The funny thing is, our video is not related to surgery or any of that kind of stuff. We used that hospital because there were a lot of halls and corridors. The hallway that we used to shoot our video was made out to look like a hotel room even though it was clearly a hallway. The video for ‘’Radiosurgery’’ was really fun for us because we had a lot of our friends there. There’s a whole bunch of things going on in the background while we play our song and we don’t really notice what is going on. It has a lot to do with an old video by The Ramones, ‘’I Wanna be Sedated’’. There’s a similar concept. It was a really fun video also because the hospital is known to be haunted. I went down with a few of my friends to the boiler room and I swear I heard weird noises.

What’s the weirdest thing you’ve ever eaten on tour?
That was in Japan, like a year and a half ago. I had raw horse meat, like sashimi. It was white, I’m not going to say that it was amazing but it wasn’t that bad, the sauce was really good but that was really random.

Growing up, what did you want to be? Have you always known you wanted to be a musician?
No, I didn’t think I was going to be a musician. I was 13 or 14 when I started playing guitar and getting into bands, I didn’t think I was going to be in a big band or anything but I knew that music is going to be a big part of my life. I was infatuated with everything music. When all of us started this band, our goal was to get this music out to as many people as we could. It wasn’t like ‘’hey, we’re going to sell this many records.’’ or ‘’hey, we’re going to tour here.’’ or any of that kind of stuff. It’s been pretty crazy because we’ve gone way past what we ever expected, like right here, I’m talking to you and you’re in another country. I never thought I would reach outside of Florida let alone the US and Canada and now most of the world know who we are.

Do you remember the smallest crowd you’ve ever played to?
I don’t want to say there were zero people but technically there were two people there. This was in 1998. We were on tour in the US and it was in Pennsylvania. There were these two girls who booked a show with us and a couple of other bands. We drove there early in the day and there was nobody there, that’s fine and then the two girls who booked the show showed up. One of the bands were naked and next thing you know, there was nobody else filling this place.

What does the future look like for New Found Glory?
We just do the same things over and over. We put out a record then we go on the road and promote them, it takes a year or two to do that and then we repeat the process. Unfortunately right now, I don’t know the specific plan for Canada but it’s not that far away from us, obviously. There are plenty of countries that we’re excited to go to and are excited to see us.