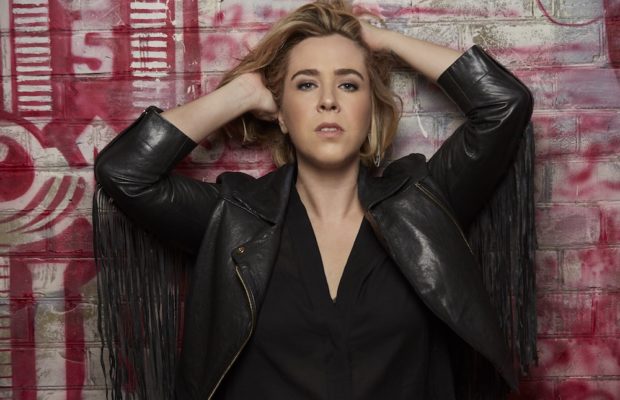 Serena Ryder first took the world by storm in 2012 with her platinum album Harmony and her hit singles “Stompa” and “What I Wouldn’t Do.” She is now back with her new single, “Got Your Number,” which you are sure to have heard all over the radio already. We recently got the chance to catch up with her to talk about her upcoming album and more!

Your new single, “Got Your Number” is really catchy and great! I feel like I hear it on the radio all the time. How did you first come up with the idea for the song? What is it about?
Thanks! I had the best time ever writing “Got Your Number.” I started by sitting at the drum kit in my living room just jamming away! I was hanging with my friends and writing partners Derek Fuhrmann and Todd Clark and was riffing on the drums. I came up with the melody and riff and lyrics. Derek laid down the track and Todd helped me finish the lyrics. It was so fun and easy. I kept feeling like I was in New Orleans (one of my fav places). I love the history and magic of the music on the streets in NOLA and it was my vision for Got Your Number to capture that .

When you were first starting out, how did you come up with your sound? Was it something that came organically, or did you experiment with a few different styles first?
I’ve always been influenced by other musicians since I was a baby. My first performance was when I was 2 years old at my step sister’s wedding reception. I got up on stage and sang Beat It by Michael Jackson. I’ve always embraced where I’ve come from as a musician. Some of my other influences have been Roger Millar, Ben Harper, Tracy Chapman, Whitney Houston, Mariah Carey, Paul McCartney , The Culture Club, A Tribe Called Quest, Tool…the list goes on and on.

You’re also set to release a new album soon as well, how was the writing and recording process like for this album? Was it any different than from Harmony?
I’m so excited to release my new album Utopia. It has been 3 years in the making and I’m actually still writing for it today. I’ve never been more at peace and satisfied with my writing process. Utopia is definitely similar to my last album in that it is a culmination of styles and beats and influences but I feel that this record is more current than Harmony. I have no idea how else to describe it.

What can fans expect from Utopia? Are there any songs on there that may strike them off guard?
I hope they expect the world from this album and I hope I give it to them. I hope that there are songs that catch them off-guard. Songs that they wholly relate to and songs that they can’t stand. I hope it makes them feel a lot because I was feeling a lot when I wrote this record.

Do you ever encounter something along the lines of ‘writers block’ when you write?
Yes, for sure. Writers block happens all the time but it happens less and less to me because I’m expecting less perfection and more honesty from myself.

When you’re making music, is there a certain message or mood that you like to try and send to the listener?
Yes… the truth. It’s the only one I’ll ever know.

You also have a very wonderful live performance, it’s a thrill seeing you on stage! What have been some of your favorite shows that you’ve played, and what made it so memorable?
Oh thank you! My most memorable shows so far have been the last two I’ve played. In my home town of Peterborough, Ontario to sixteen thousand people. It was amazing to be in front of all my family and friends for the first time in a long time with new material from Utopia . And the other show was called Wild Mountain Music Fest, it was amazing. So many kids and teenagers and parents and also just people with their friends camping and there to have a good time. They were both outdoor shows and I love playing music in nature. There’s a real freedom looking up to the sky when you’re onstage. You can’t really get any better than that.

Do you still remember what you were feeling before your first show? What thoughts were going through your mind?
Oh yes! My first show I actually chickened out of. I think I was maybe six or seven and I was scheduled to sing the Canadian National Anthem in front of my sister’s high school. I totally froze up as all the students were entering the auditorium. My mom saved my butt and was like, “we can go home now if you want” and I did. I went home and didn’t get onstage. I feel like my mom giving me the freedom to make up my own mind got rid of my stage fright after that experience. Thanks mama!

Have you ever had any surreal moments while you were playing a show?
Absolutely! I think one of the most surreal moments to date was when I was playing at the 2010 Olympic Celebration and the alarm went off while I was onstage. My band stopped playing and I continued to sing in harmony with the alarm! I made up my own “alarm song” and the crowd was super into it. It was fun and unexpected!

What are your plans for the rest of 2016?
I would love to work towards being a part of the Grammys for 2017. Good plan, right?