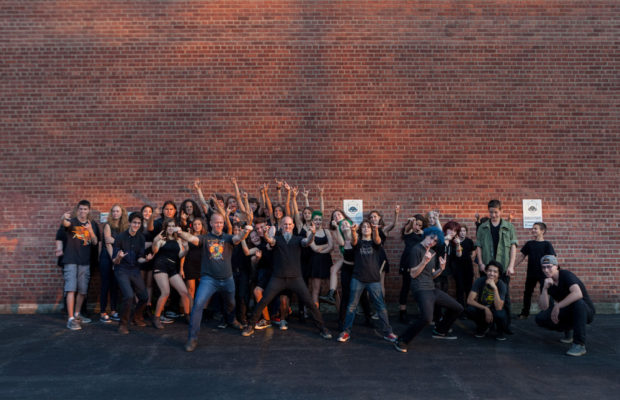 There is a place in West Hollywood tucked into the side of the Hollywood & Highland Mall where stars of the movie and music famous line the sidewalks. This is where you’ll find Lucky Strike Live. Not exclusive to Hollywood; as it has 17 other locations all over the country, but still unique in its own way.  The sound of bowling balls hitting pins can be heard bouncing off the brick walls until it gives way to the guitar chords and thumping beat of the drums as one of Lucky Strike’s notable concerts starts for the night. Yes, that’s right. Bowling and a concert venue, with full bar and food and ambience galore as only you’d expect in Hollywood. Every Wednesday night you’ll find some of rock music’s greats taking the stage together in a massive jam session for Soundcheck Live and you never know who will show up. Coming up on the night of Tuesday, August 23rd, I can tell you you’ll want to be in attendance. The Paul Green Rock Academy will be joining guests Scott Ian, Nuno Bettencourt, Brendon Small, Pearl Aday and others for a benefit concert for My Friend’s Place, which assists and inspires homeless youth to build self-sufficient lives here in LA. Taking the stage alongside the rock guests will be students from the Paul Green Rock Academy out of Woodstock, New York, which boasts two touring student groups. This group will be making a west coast run of benefit shows. Students from the Paramount Academy of Music in Los Angeles, an independently owned forward thinking music school for 10-17 year olds will also be showing their skills on stage. It’ll be a performance you won’t want to miss, and for a great cause. Stay tuned for more coverage of the show itself and a more indepth look at the three special groups involved, and interviews from the supporting cast of rock stars. Follow their links to get more information on these great programs in the meantime; and if in West Hollywood Tuesday night, come out for a memorable night to be schooled in the way of rock and roll.