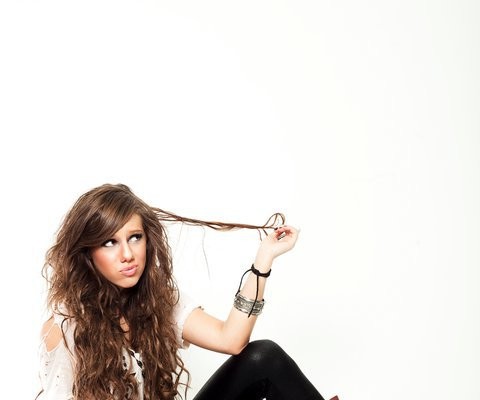 At what moment in your life does you realize that you wanted to do music?
When I was 10, I decided to take an acting class. There was a girl taking voice lessons in the other room, and i could hear her the whole time. I guess it sounded like a lot of fun to me, because I signed up for singing lessons as soon as I got done with my class. That’s when I started actually getting into singing, but before that, I had listened to the band Green Day a lot and always imagined myself rocking out on stage like they do. I think I was always meant to sing though. I had tried every single sport out there, tried all different sorts of activities, and singing just seemed to feel right.

Who are you top musical influences?
I have so many influences, I listen to all types of music. Green Day is who really inspired me to start singing though. Also bands like Paramore, Simple Plan, Yellowcard, Boys Like Girls, Katy Perry…

What is your favorite song you’ve ever written? What makes that song so special to you?
I would probably have to go with “Go Screw Yourself”. I really do feel there is something special about that song. I’ve had a lot of people write to me, and tell me how empowered that song makes them feel. When I’m on stage, singing that song; I definitely feel like I’m singing that song to a few certain people; and when I’m up there, watching the crowd jump around and scream the chorus with me…that just makes it all the more empowering. It really makes me feel like NOBODY can bring us down; especially when we are all united like that, singing that chorus loud and proud to anyone that has ever tried to bring us down.

Can you tell us what’s the story behind your latest single “Go Screw Yourself”
Well, GSY isn’t just about one particular story…it’s about quite a few different stories, and a few different people. In my life, there have been a few guys that have really done me wrong, and kids that were pretty cruel at school. I wrote the song with Dan and Leah Haywood, and while we were writing, we all thought it was a cool concept people could relate to; because everyone has someone they want to sing this song to.

You’re signed to Universal Records, how big of an honor is it for you to be on that record label?
It’s awesome, I’m lucky to be signed by Universal. There are so many amazing artists signed to my label as well. I’m also really lucky to have been signed by Chris Anokute, who is the one that signed Katy Perry.

You were discovered through YouTube. How do you think YouTube has revamped the music industry?
Well, Justin Bieber was found off of youtube, and look what just one simple cover video led to! He’s now the biggest start in the world. I did a comedy video on YouTube and had a small solo; and the right person saw it, by accidentally clicking on some video off to the side. I think now that everyone has seen how incredible YouTube really is, a lot more industry people are searching on YouTube to find the next big star. I think it’s going to be the reason for many new artists in the music industry.

What is the biggest compliment that you’ve gotten so far in your music career?
A few people have actually told me that my voice reminds them of Alanis Morissette, which is an awesome compliment because she has such a cool voice and was so successful.

What is the best part of doing music for you?
The best part of doing music for me, probably looking around as i’m performing and seeing thousands of people screaming out the words, jumping around, and having a good time. Or that special moment during the slow songs, when I really get to connect with the crowd during the song. And even after the shows, getting to meet tons of different people. There are those people who will tell you your music changed their life and really helped them through a tough time… and that really makes me day, knowing i’m helping somebody else throughout all this.

You’ve got a pretty awesome style, how would you explain the clothes you wear?
Thanks! Well, I’d say it’s different for sure! I love wearing tights with crazy patterns, and then throwing different clothes together. It’s edge, but at the same time it’s also girly! Like sometimes I’ll wear a dress that isn’t out there, or edgy, but pair it with Doc Marten boots, crazy black tights, add some cool bracelets, and wrap some black lace around my hand like a glove, and it suddenly becomes me.

What might we be seeing in the future from you?
Well, you’ll be hearing a new song and music video from me this year! Also, stay tuned, because we are working on tour dates and such! And my album will be released sometime next year, so look out for that too! But definitely, you will be hearing new music from me before the album drops. Lots of exciting things to look forward to, I’m pretty dang excited.