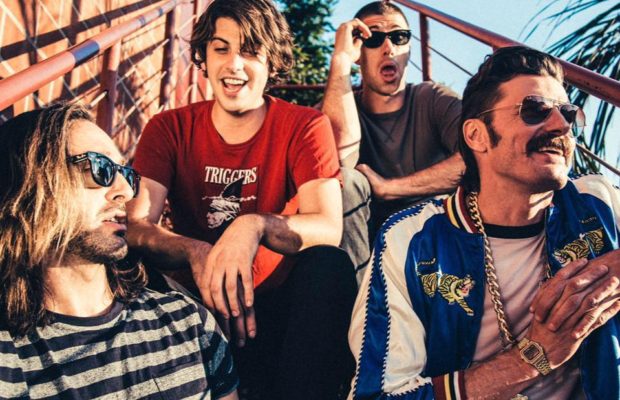 With their brand new EP, Kitchen Table, having been released at the end of 2016, LA-based rock band Pacific Radio are an act you should definitely check out this year. We recently caught up with Joe Robinson (guitar and lead vocals), Kyle Biane (guitar), and Joe Stiteler (bass) who help make up the band and they gave us an inside scoop on everything you need to know about Kitchen Table, what to expect on their forthcoming full-length release, and what is in store for them this year.

Your music has a unique yet familiar sound that is easy and enjoyable to listen to – what artists would you say have influenced this?

Joe Robinson (guitar/lead vocals): I’ve been inspired by everything from the Replacements to Tom Waits to Barry Manilow. I recently went on a Dell Shannon kick…the chords and melody choices in “Runaway” are perfect, you son-of-a-gun.

Kyle Biane (guitar): For me, I think about Brian Wilson a lot when we are in the studio. The way he uses the studio space combining instruments and players has always inspired me. “Hear that door… just like the one they used on Pet Sounds” (“Portlandia” Reference).

Robinson and Stiteler, how do you think transitioning from a garage-punk outfit to upbeat rock will contribute to the success of this band?

Joe Stiteler (bass): The garage-punk outfit was a rock & roll bootcamp fueled with whiskey, sweat, and venom; it burned hot and fast and fun but wasn’t meant to last long. Pacific Radio is built for longevity, with a supportive and experienced team in place to nourish ideas and communicate openly about what works and what doesn’t.

Getting a spot on the lineup for Bottle Rock Festival is a great opportunity, playing alongside bands including the Foo Fighters and Maroon 5. How do you think this will help benefit your band and promote your new material?

KB: I think it is a great opportunity to get to play for people that may not have ran into us otherwise.

JR:  Just to have our name on the same bill is incredible…and Tom Petty?!  It’s exciting. And no one is going there to see Pacific Radio, that’s what I’m most excited about as our live show is so damn good right now.. You know, the whole “Who the f*%k was that” effect.

What can fans expect on your upcoming full length album?

KB: There is some diversity I am excited for people to hear. We are always experimenting in the studio, so even if fans are familiar with some of the songs from the shows, they will get a fresh take of them on the record.

JR:  It’s songs about girls I hate…and a couple that were OK.

How do you believe your first EP, Kitchen Table, represents your band? Will this style of music be consistent in your full length?

JR: We chose the first four because we thought they were the strongest with a good amount of range, but now that we are moving onto the next few, I’m seeing these as competition for the Grammy.

KB: The full length will definitely have roots in the EP.  Most of the songs on this record have been played live for quite sometime. They may differ musically, but they are all coming from the same era of the band which gives them a common thread… if that makes sense.

Where can new fans expect to find you playing your staple sing along songs from Kitchen Table?

KB: Midcoast TakeOver in Austin, TX or BottleRock Napa. We will also be in San Francisco in early February and on a West Coast tour in May.

If given the opportunity, what artists do you hope to tour with in the near future?

JS: The Strokes, Queens Of The Stone Age, The Weeks.

Can you tell us about the experience filming your first music video? Did it turn out how you wanted and expected?

JR:  It represents us pretty accurately..  Robes and speedo’s.  The live shots captured our show pretty well. The director thought we were turning it up for the video until he came to a show a week later and saw it’s just how we play music.

KB:  I am really happy with the way it turned out.  It was my first time ever making a video and I really enjoyed the collaboration process.  The two day shoot was planned meticulously by our Director, Caleb King, and although playing the song at full gig energy for eight hours was a work out and a half, it went by really fast and was a lot of fun. As we went into editing, it was cool to watch it all come together.