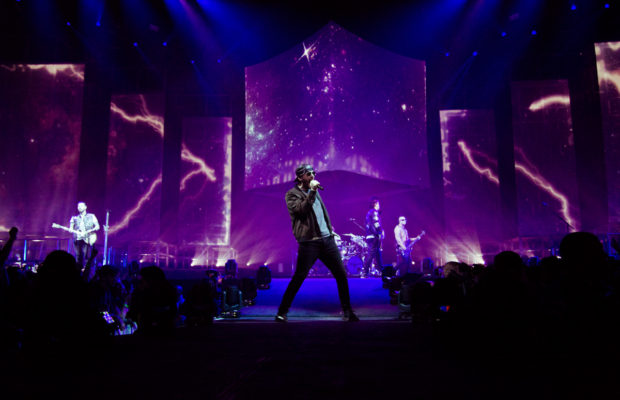 It was a chilly Sunday evening, but it didn’t seem to bother the thousands of fans who started filling up the O2. Some of them returned to rock again and enjoy this superb triple metal-giants bill, while the others probably just couldn’t get a ticket to the same sold-out show that took place here the night before. In spite of Southern-Railway’s best efforts – we managed to get to the O2 just in time to grab a quick pint before the show and even to have chat with one of the bartenders who predicted: “This evening the O2 won’t be at full capacity (20,000 – 21,000) as it was last night, maybe just 8,000”… I’m happy to say – he was way off.

As the background music faded away and the lights went off – “In Flames” unsheathed their guitars and kicked off the show with the excellent opening riff of “Bullet Ride”, from their 2008 album “Clayman”. These Swedish metal aces then proceeded into playing material from different eras in their vast musical repertoire, ranging between their “Gothenburg origins” of Melodic Death Metal, with excellent guitar work demonstrating speedy riffs and harmonized guitar solos A-la Iron Maiden – and their current, more American influenced style – brushing swords with Nu-Metal/Metal Core, Introducing clean, melodic vocal lines in the choruses, intertwined with synths and samplers. Half way through the show, when introducing “The End” – from In Flames’ latest album “Battles”- Vocalist Anders Fridén’​ ​had challenged the crowd to get the first mosh-pit of the night started. Challenge was accepted, and accomplished with great success. Throughout their show, Andres delivered a highly energetic vocal and visual performance, and did a great job kindling the crowd into screaming for him – and in his noble way – got them to scream their hearts out, harder and harder yet again for their co-tour mates to follow that night: Disturbed and A7X. Even though this veteran band, with their 12 Studio albums has been “out there” for a while, You could definitely still see they work hard to put on the best possible show for the crowd, they take nothing for granted – and they keep thanking the (well deserved) fans for supporting them.

After a quick and professional setup change on stage, Distrubed’s guitarist Dan Donegan breaks the silence by launching a mesmerising guitar solo, standing strut on the vast stage of the O2, just him and his guitar. He was soon joined by his band mates in a demonstration of a meticulously produced metal show, with impressive pyrotechnics flaming all over the stage in perfect sync with the peaks and tension breakers of each piece. Disturbed’s performance seemed to be much more planned and orchestrated than their formers on stage, with the exception of bassist John Moyer, who – whenever he could, tapped his notes using only his fretting hand (usually ‘over-the top’ of the bass’s neck) – and used his free hand to interact with the crowd. Disturbed’s big, heavy, steady riffs perfectly complemented the intricate and unique oriental melodies and key changes brilliantly executed by vocalist David Draiman, who was clearly influenced (and gained admirable vocal prowess) by his classic training as a Jewish “Hazan” (songful prayer leader). The well practiced trick of dimming the lights and getting the audience to light up their lighters / phone torches worked great tonight, as the stage setup had transformed and took the shape of a majestic acoustic show: John’s Bass was replaced with an acoustic guitar, Dan’s nifty axe was replaced with a grand piano (!), and it seemed that the whole of O2 were chanting along with David as they delivered their beautiful rendition of Simon & Garfunkel’s “Sound of Silence”. Overall, Disturbed have gifted us with a one of a kind, powerful, slick, solid performance And we can’t wait for them to come back to London again.

As the stage was being set up and prepared for A7X to take over – Elton John’s “Rocket Man” was playing through the venue’s PA, followed by Bowie’s “Space Oddity” – and it was truly heart-warming to see all these hardcore fans, metalheads and other types of rough characters all having a sing-along over these mellow, timeless masterpieces. The stage was now completely clear, no pyro towers, lighting poles, amps, rack, cables or even effect pedalboards remained in sight, except for a single “Wah” controller pedal – marking the spot for epic guitar solos to come. Whether this “clear stage” attitude was an intentional choice, or a happy coincidence – it was very symbolic, as this tour is out to promote the band’s latest album “The Stage” (released late 2016). It all came together as the descending pitched synth sounds of the intro to “The Stage” (Opening song of the album) faded in, followed by guitarist Synyster Gates ripping through the opening guitar line – and gradually joined by the rest of the band. A7X’s next two pieces also consisted of album theme songs from different eras: “Afterlife” (Avenged Sevenfold, 2007), and “Hail to the King” (Hail to the King, 2013) – and they all seemed to have been warmly received, judging by the massive maelstrom-like mosh-pits. Frontman M. Shadows did an amazing job working with the crowd, he seemed to be in a constant state of dialogue with the whole audience as one big collective entity, he was incredibly incorporative- and did all that whilst operating a powerful pair of lungs to drive his harsh, throaty yet accurate singing. Mr. Shadows could have never pulled this off without the trusty group by his side. Looking like “a bunch of rascal troublemakers who are up to no good”, A7X are actually a collection of passionate, skillful, innovative musicians – who write complex and progressive material – yet manage to make it sound communicative enough, and bring it to life on stage in a highly professional fashion, whilst still maintaining a “live”, maybe even “wild” feeling. Lead guitarist Synyster Gates, with his eye popping collection of signature Schecter guitars, appeared as if his stretchy, complicated solos were just a light breeze as he sailed through odd note groupings and lightning fast arpeggios with unbelievable accuracy, while jumping and running around on stage. Exactly half way through the show (not counting the encore), there was a shift towards the mellower side of things, and the band played “So Far Away” in memory of their original drummer, Jimmy “The Rev” Sullivan, who passed away in 2009. Having played the O2 the night before as well, in a surprise move the band decided to make a few changes and not repeat the exact setlist. To our disappointment we didn’t get to hear “Almost Easy”, but luckily we got the excellent “Beast and the Harlot” instead.

Tonight we got to see 3 extraordinary shows by 3 critically acclaimed bands – each one a leader of their own genre.
The doors of The O2 were closing behind us, and thousands of happy metalheads made their way into London’s Underground with big smiles on their faces and a heart full of satisfaction and content.

What a way to end a weekend.