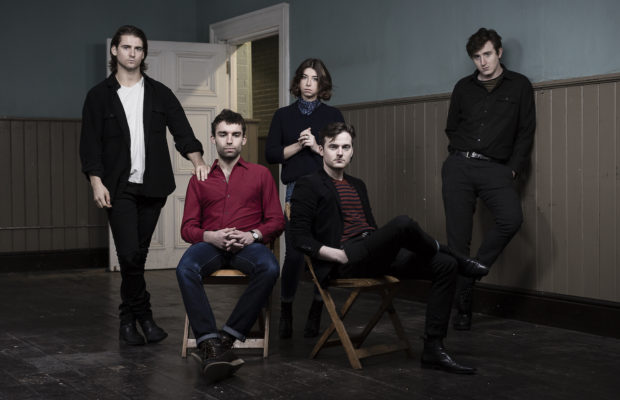 Little Green Cars put on an intimate, beautiful, and chill-inducing show at Club Dada in Dallas, TX on April 13. Before the show, I sat down with Stevie Appleby to discuss the band’s latest album and current US tour. We had a brief, but very interesting, chat about brutally honest lyrics, fans, and the significance of the word ephemera.

Your new album, Ephemera, just came out. It’s great, I’m definitely a fan. Do you have a favorite song on the album? To play live, or lyrically?
Favorite song… That’s a tough one. I guess each song kind of offers a different thing for me and some of it’s quite private, you know, so it’s a strange feeling to perform them live. But, I like “The Song They Play Every Night” because to me, it kind of encompasses the whole record in one, it sets a good mood for the rest of the record, I think. So, probably that one.

I heard that Faye wrote “Ok Ok Ok” when she was 16 years old, so what other songs on the record were written previously, and what’s the timeline like for the writing of the album?
“Ok Ok Ok” is definitely the oldest song. I wrote “The Factory” while we were recording the first album, so that’s probably the second oldest. We’ve always maintained to never stop writing, so like when we were recording the first album we were still writing songs just in case something came. And even the newest song was written a week before we finished recording the second album, which was “I Don’t Even Know Who.”

It’s mostly you and Faye that come up with the lyrics, so what is the writing process like? Do you have an idea and bring it to everyone else, or is it more of a collective effort?
We’ll have a song on the acoustic guitar, or just like the lyrics and the tune, and then as a band we kind of flesh it out. I’ve always said that feelings are very ugly things. So you take this very ugly thing, and we bring it to the band, and then we try to make it as presentable as possible, as though it was a beauty pageant or something – but still trying to maintain the core of the song. The music is influenced by the lyrics, for us anyway.

You clearly draw a lot of inspiration from literature and poetry, and that’s evident in the song “Harper Lee” and even the title of the album, Ephemera, which is the name of a beautiful poem. What other authors or poems influence you?
The title from the last album was “Absolute Zero” and that was a quote from Charles Bukowski. I guess a lot of realism literature would inspire what we do. Literature has always inspired so much. I left school when I was about fifteen, so to kind of maintain an education I just started reading all the time and eating up books, so it just permeated every aspect of my life.

What was so special about Ephemera that it was the one to define the whole album?
It’s funny because we were actually looking in the book for the font to use, not the poem, and then I read the poem out loud in this meeting we were having, and we were just like, “Oh, hang on. That’s it.” It was a word that we’d been trying to say for like a year and a half. We were all just saying in roundabout ways exactly what that poem was saying. Because “ephemera” means something that’s important, but only for a short amount of time, and nowadays that could be applied to so many things, you know. Everything seems to kind of come and go. And it’s especially true with music. Like, there are records that I don’t really listen to anymore, but I still look back on them so fondly because of the moments in my life that I was listening to them so much.

Yeah, like, that was great for that specific time in your life.
Yeah, and so that’s what we were hoping to be with Ephemera – it’ll be something during that moment in someone’s life, you know. And it won’t last forever, but it could still be something for them.

How would you say that this album compares to Absolute Zero, whether thematically, lyrically, or musically?
I’d say we approached it in kind of the same way, which was just to be as brutally honest as possible with the lyrics. And so the only thing that’s the difference, really, to me, is the three years of life in between them, and just how things naturally changed in that way. To me, the two records aren’t that very different, but I know I’m maybe seeing it from a biased point of view.

Well, they’re not radically different.
Yeah, we just approached them in the same way.

You’re about halfway through this US tour. You’ve toured here before, but how so far is this comparing to previous times in the US?
This has been pretty wild. It’s so easy to get caught up in “hype” and stuff, which doesn’t really mean anything. People can tell you all this stuff but it doesn’t really show – there’s figures online and there’s this and that, and in the end you’re kind of like “whatever.” We went to LA, and the first time we played LA it wasn’t that big of a show, and then this time it was sold out. And San Francisco was sold out. We actually get to see the crowds getting bigger, like firsthand. And we get to see people singing the lyrics back, which I still can’t get over. Because I’ve been listening to the record now for like a year, and now when I see people singing back the lyrics I’m like…

Yeah, that’s cool. Back to what you were saying about your lyrics just being brutally honest – that’s something that I think definitely makes the band special. Is that what you think fans relate to most?
Yeah, I guess there’s a point that you realize when you’re in a band you have an opportunity to say something and someone’s gonna listen, so you may as well tell the truth, you know. For me, the biggest revelation in music was realizing that I wasn’t unique, and that if I’m just honest with how I’m feeling, it’s gonna be the same way someone else is feeling too. And to do that is the most important thing that a human being can do – for me anyways. I try and just be honest.

Have you had any really special fan experiences or encounters here in the US on this tour?
Yeah, we played an in-store in Portland, and this huge dude came up to us, and he was like a proper heavy metal dude. He was like, “You guys are the only band I listen to that aren’t heavy metal. My friend showed me one of your songs because of the name of the song.” They had spent this summer together and it was like the soundtrack to their summer, and then his friend, Vanessa, committed suicide, and the song then became this whole new thing to him. When he listens to the song he remembers the summer that they spent together. To be that in someone’s life is just so overwhelming. And she had shown him the song because his actual name was John Wayne. So, that was probably the wildest one so far.

So what is it like touring here in the US as opposed to being in the UK? Is there a stronger response over there since that’s where you’re from?
It’s very different. When we’re playing in Dublin it’s good. It always feels like we’re coming home in Dublin, you know, because we’re not there very often. So every time we play there it’s a “coming home” show. And every time we’re over here it’s like just the natural way. This is our seventh time here. The audiences are so different though, totally different ballgames to me.

Being here in the US, whatever the differences may be, what’s your ideal crowd at a show?
It struck me in Milwaukee, there was something about the crowd, and I realized that they’re not here because they think the band is cool or for any superficial reason. They’re just here because they like music. Like, someone came up to me after and was like, “That was really good! You guys are really cool.” And they just thought we were cool because we were good at our instruments, and I was like, “That is cool.” You know, at the core of things, that’s all a band is supposed to do. That’s the only reason they came. And I thought, “Wow, that’s pretty genuine.” [Laughs]

What are some artists that you guys have been listening to recently while on tour that you would recommend to somebody else?
On this tour I’ve listened to a lot of Sun Kill Moon, just because it goes so well with the landscape. I always try and match it with the landscape that we’re going through. But also on tour I always go back to, like, The Beatles and Bob Dylan just because it’s very grounding music.

Now, I’m sure you’ve told it a million times: “How the band came together.” I know you guys were friends in school. But what was the first moment that you can remember thinking, “We have something special here and we’re gonna do this.”
I think it was when we were writing this song called “Boxcars” and I just remember we had recorded everything and I was sitting at my house with Adam and we were working on the mixing or something. I remember my cap was backwards and I was smoking a cigarette and I was just like, “Alright, I’m a musician now.” [Laughs] In the most cliché of ways, but I was like, “Wow, this is really cool.” I remember the first time my dad said, “That’s actually good.” And I was like, “Wow!” [Laughs] He’s a classical musician, and our biggest fan but also our biggest critic, so when he said that he liked something I knew that was good.

After this tour you’re going back to the UK for some shows. So what else is 2016 looking like for you guys? Any festivals in the US maybe?
I’m taking it a day at a time at the moment. I know that we’re going back and doing tours around Europe. I don’t know any of the dates and I’d like to keep it that way for as long as possible so I don’t freak out. [Laughs]

Would you like to do any festivals here?
Yeah, absolutely. We’re still open to doing some. I’m not sure there’s any for this tour but we’ll definitely be back.

–
Ephemera is available to buy or stream now. Catch Little Green Cars on one of the remaining dates for the rest of the US tour here.