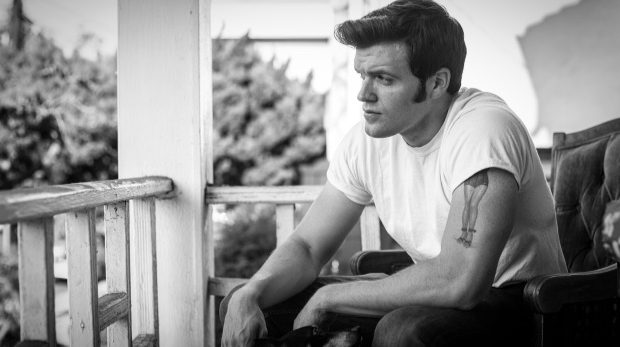 Singer-songwriter Rod Melancon is a talented songwriter and storyteller whose lyrics draw inspiration from his life.  The son of a theatre teacher, his mom introduced him to tons of plays and novels while growing up, which in turn influenced the artist he is today.  Born in the back country of Louisiana, he moved to LA at the age of 18 with the interest of becoming an actor.  It was on a trip back home, while seeing his grandfather’s reaction while listening to Hank Williams, that Melancon realized the power that good lyrics can have on a listener.  Once he was back in LA, he found his own voice as a songwriter and musician and decided to switch his focus to music and soon became a part of the Grand Ole Echo scene in LA.  He released his first album in 2012 and has recorded a sonically diverse mix of albums since then, morphing from a country sound to a rock sound to his more recent psychedelic soul/bluesy/rock sound.   Melancon recently released his latest album entitled Pinkville, an album that is more personal and biographical in nature than his previous work.  The album was recorded in a series of live takes in Adrian Quesada’s Austin-area studio and features Will Waldon on lead guitar.  The son of Emmy-award winning composer Snuffy Waldon, Will is what Melancon calls his “right hand man”, having a huge influence on the songs and recordings.  Having moved to Austin in recent years, Melancon says he likes the vibe and atmosphere of the city and says it is where he met Pinkville‘s co-producer Quesada.  With a music video in the works, an upcoming tour in September/October with Hayes Carll and plans to work on a new album, he has plenty of exciting things in the works to look forward to.  Staff writer Emily May spoke recently with Melancon by email and discussed his new album, his upcoming tour with Hayes Carll and what’s next for him.  You can follow Rod Melancon and stay up-to-date with all upcoming artist, music and tour news via the following links:
Website | Facebook | Instagram | Twitter | Spotify | SoundCloud | iTunes/Apple Music | YouTube |  Deezer | Google Play
You recently released your new album Pinkville, which I read you recorded in analog.  The song “Different Man” from your previous album Southern Gothic was the first song you recorded in analog and you said then that to didn’t think you would ever go back.  What is it that you love about recording in analog?  What inspired you to record the album in a series of live takes?
My favorite records were recorded on analog and were also usually recorded live.  It makes a difference.  The common listener may not notice it but I always do.  Analog can’t be topped.