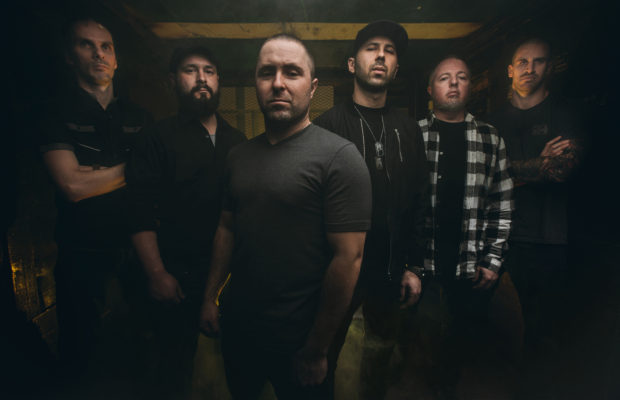 After taking an indefinite hiatus back in 2010, deathcore band Despised Icon are back with a new album, a new outlook and a bit of a point to prove. Since signing with Nuclear Blast, heavy metal’s top independent record label, in April, their brand new album, BEAST, is set to drop worldwide on July 22nd.

We caught up with vocalist Alex Erian in the middle of Despised Icon’s run with the Impericon Festival earlier this month and he spilled all of the secrets regarding their new music and how this chapter for them is looking to be the best yet.

You are about halfway through your run with the Impericon Festival, how has the tour been so far and how has this experience been different from past tours and festivals Despised Icon has done?

It’s weird because we have been jumping around a lot. We started out on the Impericon Festival, then we jumped onto the Never Say Die! Spring Fest Tour and then jumped on the Progression Tour which was awesome. Now, we are back on the Impericon Festival and it’s been great. I wish we had a little bit more time for changeovers, but we make it happen. We wish we had a longer set as well, but there are so many bands so it’s understandable. We love the festival setting and like I was telling a buddy earlier, I love the diversity of these festivals. From Blessthefall who have clean choruses to us who have a lot of double bass drums and growls, there’s a little bit for everyone in there and I enjoy playing in front of people who necessarily wouldn’t come out to any of our shows. We’re winning people here and there, but I am looking forward to going back to more of a show setting and being able to play more than six songs.

You have a brand new album, BEAST, coming out this summer and you recently just signed with Nuclear Blast. What can you tell us about the new batch of songs and how did Despised Icon decide to come back together and start making music again?

It’s great and I was talking earlier about how burned out we were at the end of 2010 when we decided to disband. It had reached a point where music wasn’t even music anymore, it was strictly work and we were all burned out. There we were, pushing 30, and a lot of us had new career opportunities and a lot of my boys are fathers now and it became too much so we decided to take a step back.

Four years later in 2014, we all gathered to see Max who was our old bass player and is playing in The Black Dahlia Murder now. It was our first time being reunited as a band and it felt great. I keep telling the same story, but it’s a nice story – there we were all gathered backstage and we were talking about all of the these old tour memories and we generally started missing it again which is when we started hanging out more. From that, that spark just came back so we decided to play a couple of reunion shows in 2014 and we played some of the Impercion Festival shows which are very easy going in the sense that we don’t have to attract people because there are so many bands playing. The challenge was playing these headlining shows in between the Impercion dates back home in Canada and America, but they went really well and it made us see that people still cared about our music.

The response from those reunion headlining shows showed us that people still cared about what we were doing so we sat down to write a song and it quickly became two songs, then an EP and next thing you know, we have a full length coming out on Nuclear Blast. That’s just how it happened, it’s that simple.

Creatively speaking, it felt good to not be pressured by the industry and the expectation of fans. When you are in a band, normally they expect you to put a record out every year so we didn’t have that blinding our creativity and ideas flowed, we needed that outlet again to play extreme music. We took a break from extreme music, we all see each other as just music lovers in general so we listen to a lot of different shit. We are from Canada so we listen to The Weeknd and Drake – actually the whole band doesn’t really like Drake, but I like him so it’s cool. With that being said, we felt like we weren’t rehashing old ideas and we didn’t force anything and now we are putting out new music and touring again.

It’s been seven years since Despised Icon last put out music. How did the seven year break influence the writing and recording for BEAST?

Like I mentioned earlier, we got lost in the grind. We wouldn’t hang out together anymore and we wouldn’t jam. But now, it’s good to actually go to our drummer’s place and spend the afternoon playing our set and have a couple of beers and hang out. That’s why I keep saying that it feels like the good old days because that is how it started out, that is what we are getting back to and that’s why this band can continue on. Otherwise, I wouldn’t see the reason for it. It’s definitely been refreshing and playing extreme music gives us the outlet to be positive. For me, writing is just keeping my head above water and it’s turning negative experiences into something positive instead of just flipping tables and breaking shit. I just get to act like a crazy person onstage and let it all out and here we are now, just smiling and laughing. Life’s not that bad.

You just recently signed with Nuclear Blast for this new album. What is it like to be signed to such a big and influential heavy metal label?

Hatebreed and Slayer are on Nuclear Blast and I just remember picking up this compilation in 1997, it was like volume 3 of Death Is Just The Beginning which is a Nuclear Blast compilation and there were all of these bands on there I hadn’t of heard of. At that time, I was listening to a lot of Megadeth and other big name bands and all of a sudden, the whole world of extreme music opened up for me and part of the reason for that is Nuclear Blast.

Originally, we wanted to put it [BEAST] out independently so we could have control over it all, but I want to have fun and have this music thing be fun so we decided to leave all of the business aspects to the people who are qualified. We still self-manage the band, but it’s good to have their help with properly promoting and distributing everything so we brainstormed and reached out to Nuclear Blast and they listened to the album and decided to sign us. It was almost too easy, but it made sense and a lot of people who we were working with back in the day now work with Nuclear Blast so we are working with friends and we are working with people who I feel genuinely care about us and our music. We are label mates with bands we grew up listening to and old tour mates as well.

Social media has changed a lot since Despised Icon was together and making music. How has social media nowadays influenced the band, whether positively or negatively?

You have to play the game, you know? When the band first started out, it was just such a different environment and we didn’t have any of those [social media] tools. When we booked shows, we would pick up a phone and I didn’t use email in the 90s. It was such a different environment, looking back. The scene is so saturated now because everyone has that voice which is great in a sense, but it’s a game you just have to play. I remember people telling me we had to put our new shit on Myspace and even though I didn’t want to do it, it ended up being really beneficial for us.

We broke up in 2010 when bands were doing Myspace and that was the most relevant thing so during our four years of inactivity, we started a Facebook page and didn’t post anything, but it still accumulated a decent following on there so now it’s cool because we have that tool and can actually reach out to people that care.

We are five years late on the Instagram game, same for Twitter, but we just started an Instagram page. Social media is very important because we have to keep people informed and we have to give back. You could be the best band out there, but if you’re not willing to play the game and sell yourself and interact with the fans, it’s not going to work out. Whether it’s social media or face to face conversations, it’s important in this industry so you just have to do it.

Your can pre-order their new album, BEAST, here.