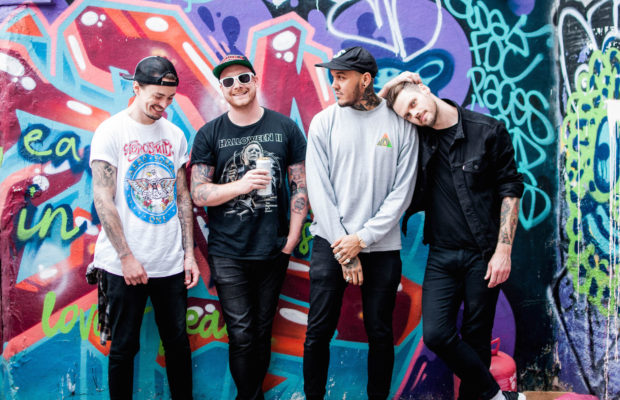 Breaking into the music scene with an unapologetic and energy infused rock ‘n’ roll sound, Leeds based band Brawlers are about to be taken to a whole new level with their new release, The Black EP. Catching up with singer Harry Johns before their show in London, he talked all about the band’s upcoming release and why they have no intention of ever sugarcoating the themes in their music.

What can you tell us about your new EP, The Black EP, and how will it be different from past music Brawlers have put out?

I think that we are in a position in our careers where we are completely aware of where we are and where we want to be. The record we put out before, we really like it, but in the past year, we have been put into this pop punk image which doesn’t really appeal to us. So we decided that we needed to release new songs and have it be an honest reflection of where we are with the band and what we are doing. It feels like we are about to release a batch of songs that show where we are as human beings. There are a lot of songs about drinking too much in vans and outside of venues, touring a lot and how that has an impact on your life for better or worse. It’s just about our lives whereas the first record was a a bit more retrospective and about girls and boring stuff like that. Now, it’s about the here and now.

What was the overall recording process like for this new EP? How long were you in the studio for and who did you work with on it?

We worked with a guy called Tom Mitchener and he plays bass in the Rattlesnakes with Frank Carter. We did a show with them last year and we just got on. I think that maybe in passing we had mentioned that we were hoping to recreate our live thing a bit more with the next record and we listened to Frank’s record that Tom produced. It sounded amazing and was exactly what we wanted to do. We wanted to make a record unlike our last record where we listen to it and it sounds like we are just playing in a room which isn’t very like us. We are a very live band and we play a lot of shows. We went down to the studio and stayed with friends and slept in the van just to make it work which is different because for the first album, we would go into the studio for a couple of days and then do something else for four more days. For this, it was intense with fourteen hours days just working really hard to get the right live take and we weren’t worried about it being perfect, we just wanted it to feel alive.

Brawlers have a lot of upcoming tour dates around the UK. What can festival and concert goers expect from your live set?

There are a lot of bands that we see who feel that playing live is a necessary evil. The whole reason that we put Brawlers together was to play live so honestly, when people come and see us and pay money, we respect that and we will fucking put on the best show we can. It’s the music, but it’s also showmanship and bringing everything together. It annoys me when bands interpret playing live as standing on a stage and playing a song when it’s a whole lot more than that. It sounds a bit cheesy, but it’s true. We might not be the most proficient musicians and might not hit all of the notes that we can, but we will give you a show out of respect of you giving your time to watch us. It’s really important to us and we will make it memorable. Every show is somewhere between chaos, fun and a bit of danger. We’ve never had a lackluster gig and we are very lucky to able to tour with bands who want to reflect that whenever we play live.

The first single off of the EP is “Day Job”. What made you decide to release that song as a single as opposed to the other ones on the EP?

It is the most emblematic of what we are doing. We work day jobs and one of the worst things is when people are pretending to live this rock n’ roll weekend bullshit. Brawlers are four best mates who get hammered on the weekend and we all work shitty day jobs so why would we pretend that’s not the case when the whole point in listening to alternative music in the first place is to listen to something that is honest? That’s all we really wanted to bring to the table – it doesn’t matter if you are a bartender, a fucking street cleaner or a guy in a band sometimes, everyone is feeling that struggle. Am I going to make enough money? And then you get paid and then you fuck it all up and get hammered on a Friday. That’s not just me and I’m sure it’s not just you, it’s all of us so let’s write some fucking songs about it.

Are the honest, real life themes found in “Day Job” something that’s common in other songs on The Black EP?

It’s the same deal with a song called “Better Looking”. Everyone in the fucking world, whether you have sex with fifteen beautiful women or men or go on the Tinder, Facebook and Instagram bullshit, everyone at some point during the week sees something and says “I wish I looked like this person” or “I wish I could put on weight or lose weight” so we decided to write some songs about it because we are all unified by that feeling. You go to a bar and there is a hot girl in the corner or a guy with a beard and tattoos on his face and there’s going to be times where they wished this or wished that. If we all just kind of talked about it more and admitted that side of ourselves then I think that would be awesome and the world would be a bit better. I definitely feel like that sometimes, but it’s all bullshit. We are all the same.

Read our exclusive review of The Black EP here.