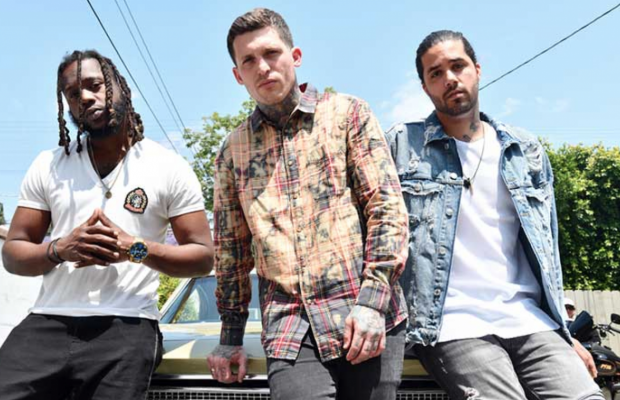 Out of the ashes of beloved Australian metalcore outfit Capture The Crown comes a rebirth with the formation of Capture.  The band brings together original CTC frontman Jeff Wellfare, drummer Manny Dominick (Ghost Town, Kid Cudi, Wiz Khalifa) and bassist Erik Vaughn Weatherford (Oh, Manhattan) for a completely new creative force that represents the union of three singular talents whose own roads twisted and turned to reach this point.  Propelled by the promise and potential of a clean slate together, Capture is releasing their debut effort Lost Control today via Artery Recordings.  The band has released their first single “No Cure”.  Of the new single Jeff says, “”No Cure” was written and recorded during a hyper-politicized period where religion was the focus of negative basis and the world seemed separated into several groups.  There was much debate on the topic and it resonated with us; we strived to twist the ideology of these issues in a way that would open people’s minds to what is really important to them regardless of what race, religion, sex etc. “No Cure” may come across like a backhand to religion but it is much deeper than that and can be perceived as a deeper reflection of everyone’s inner battles. In saying that we hope everyone can take something different away from the song. For me personally, it’s about self-empowerment, inner-demons and overcoming the obstacles in front of you.”  In speaking about the new video, Erik says, “We worked hand in hand with our director, Embryo, to help bring this concept to life. It was very important to us to show the duality between self-empowerment and relying solely on one’s beliefs in difficult situations. It’s such a fine line and a personal battle essentially within your self with this other side of you. We wanted to bring that battle to life in a cinematic way while doing justice to this prevalent theme from “No Cure””.

“All three of us are from entirely different backgrounds, yet this album brought us together for a new chapter,” adds Erik. “We’ve got a relatable story to tell.”  “The idea was to do something completely different,” explains Jeff. “We wanted to test ourselves, experiment, and push the envelope. We came out with this roller coaster of a record that has something for everyone. This is a fresh sound. It’s a fresh start, full stop.”  The “fresh start” encompassed major musical strides. The musicians unlocked an elusive nexus between metal and melody equally influenced by everything from Linkin Park to Slowdive and Coldplay. In order to bottle this energy, they entered a Portland studio alongside producer Kris Crummett [Sleeping With Sirens, Issues, Dance Gavin Dance] and emerged with the twelve tracks comprising Lost Control. The sonics expanded over the course of the process. They incorporated analog synths throughout the fabric of the record in addition to inviting a twelve-person choir to “body the album and make it feel full” during “High,” “Lost Control,” “Is This (Love),” and teaser track “The Lake.”  The title spoke to a shared experience.

“Lost Control complements the chaos surrounding all of us,” the frontman continues. “You often don’t have control—except within your art.”   Capture take the reins of their destiny on the 2019 single “No Cure.”  The song immediately snaps into a double bass gallop punctuated by nimble thrashed-out riffing and Jeff’s seismic chant, “You’d better pray for yourself because there’s nobody else.”  A harrowing cinematic video accompanies the song, weaving a captivating cultish narrative. “It might seem so in-your-face lyrically, but it’s incredibly metaphorical,” Jeff admits. “You can read into it—or not. We wanted to leave it up for interpretation.”  “We’re really bringing different things together,” adds Manny.   “We’re bridging the gap between different genres, keeping the integrity of a heavy background but infusing pop elements, bright choruses, and synths. These songs prove it.” Elsewhere, “Alive” unfolds from hypnotic verses into an instantly unshakable chorus under strains of distorted guitar and shuddering piano keys. As Jeff puts it, “”Alive” gives the album a softer and anthemic start with a lot of dynamics. It’s the beginning of the journey.”  Sonny Sandoval drops a knockout cameo on “High,” Thomas Erak from Fall of Troy lays down some cracking guest vocals on “Alive” and Earth Caller’s Josh Collard lends his scream to “Dead Hollywood.” Everything culminates on the punked-up barrage of “This Ones For You,” which hinges on a guttural gang vocal and delivers “a crowd pleaser for everyone to sing along to.”  In the end, everyone will be singing along to Capture.  “We’d just love for people to relate,” Jeff leaves off. “We’ve got something very special between us, and we can’t wait to share it.”  You can follow Capture and stay up-to-date on all band, music and tour news via the following links.  Check out their upcoming tour dates below.