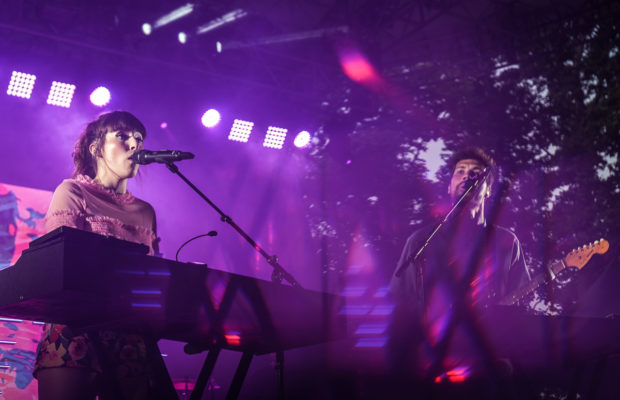 It’s sometimes hard to believe that nestled inside the center of Manhattan, with all of its tall buildings and bustling streets, is a huge park called Central Park. During the summer at Rumsey Playfield they offer free concerts at Summerstage. On Monday night Sasha Sloan and Oh Wonder played to a sold out crowd— fans had been lining up for this free concert since early that morning.

Up first was Sasha Sloan. Sloan, who has been on the scene for the past few years with co-writing songs for everyone from CharliXCX to Camila Cabello, is starting to chart her own path with the release of her debut indie pop single “Ready Yet” this past fall. Sloan played songs off of Sad Girl to an enthusiastic crowd— some people were singing along to her songs in the crowd. She is definitely an artist I would love to see again and I’m happy that she is spreading her wings.

If there’s ever a band you want to see that will bring an instant smile to your face Oh Wonder is the band you want to see. This London-based alt-pop duo, consisting of Josephine Vander Gucht and Anthony West, came onto the stage with huge smiles on their faces instantly making the crowd smile back at them in turn— it felt as if you were greeting an old friend. In between songs Josephine talked about how they were afraid no one was going to show up since it was a free show— which was the opposite. She also shared a funny story about trying to see One Direction when they played there a few years back but it was sold out and how they couldn’t believe they were playing on the same stage now. They sang songs of of their albums Oh Wonder and Ultralife that had the crowd singing along word for word. If they tour near you, be sure to go to their show for you will have a fun-filled time.