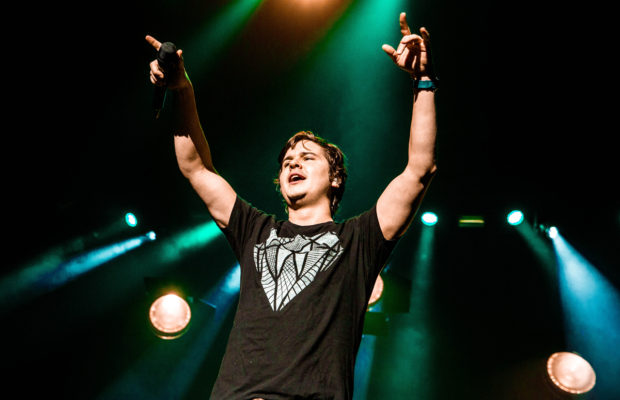 Danish singer/songwriter Lukas Graham had an amazing 2016, topped off with two Grammy nominations for his hit single “7 Years”. Ringing in the new year like any rocker should, Graham embarked on a full North American tour this month. He arrived in New York on Saturday night for a sold out show at Manhattan’s Hammerstein Ballroom.

Hein Cooper, a singer/songwriter hailing from Sydney, Asutralia had the task of amping the crowd up for Graham’s performance. He took to the stage promptly at 8PM where he blew fans away with his immense talent and beautiful vocals. Cooper played a 35 minute set chock full of hits from his debut album The Art of Escape, including “Rusty” and “Fear of Missing Out”. He proved to the crowd that his one man band had what it takes to get the 2,200 capacity venue bumping. Before his final song, Cooper told the crowd about when he first met Lukas Graham after opening up for him by chance in Montréal. Since then, Cooper and Graham have toured through Germany and now the States together.

About a half hour after Cooper completed his set, the lights went dim again. Lukas Graham’s band graced the stage, each taking their positions behind their respective instruments: keyboard, drums, horns and bass. The introduction to “Take The World By Storm” off Graham’s debut self-titled album began before the green and yellow lights blasted on a Graham began singing along. Running from one side of the stage to the next, Graham was hard to keep up with as he pumped more energy into the crowd while never even missing a beat. By the third song, “Hayo”, Graham had ripped his t-shirt off, darting across the stage in his thin white tank top (which would later come off as well). The energy throughout Hammerstein Ballroom never died down for the remainder of the evening. Graham’s 15-song setlist was diverse with songs both new and old, like “Mama Said” and “Youre Not There”, as well as some songs that haven’t yet been released in the United States. As predicted, Graham concluded the monumental show (his largest New York City show to date) with his hit “7 Years”, an emotionally charged ballad that really completed the night as a whole.