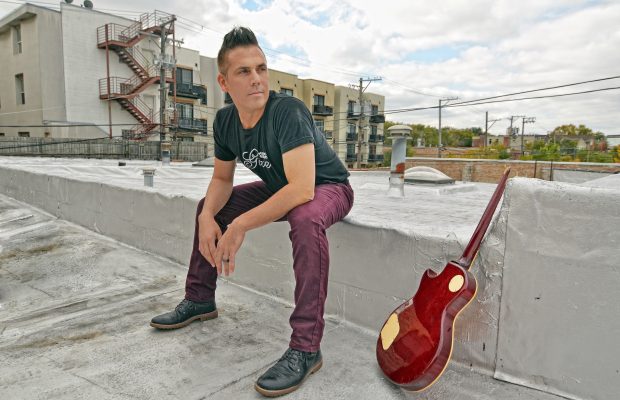 Musician David Scotney fronted the heavy rock group Janus, touring the country with a major label deal and a top 10 single, 2009’s “Eyesore” and toured with bands such as All That Remains, Breaking Benjamin and Sevendust.  The band formed in 1998 in Chicago and released 5 studio albums, mixing alternative metal with non-traditional rock instruments that included auxiliary percussion and electronic sounds.  Scotney left the band six years ago, retiring from music to move to Lake Geneva and open a pizza restaurant.  Having developed a real passion for Neopolitan pizza and the art of making it, he opened Oakfire in Lake Geneva in 2015.  Scotney has recently restarted Janus as more of a solo endeavor, with his goal being to give back through his passion for music.  He has launched his own label, MUSIC FOR GOOD, that combines philanthropy of all kinds with music that features a variety of artists.  The label is a non-profit organization and completely philanthropic.  The goal of the label is to release each single in a way that builds awareness for different causes by not only releasing music as Janus, but also by working with other artists who share his same vision.  His first single, “Drive”, is a re-imagining of the hit 1984 track from The Cars, a song whose lyrical message about the struggles with mental health spoke to him.  Having a family member who struggles with bi-polar disorder, Scotney wanted to highlight this disorder that he says often gets misdiagnosed and mistreated.  Proceeds from the sale of this single will go to The JED Foundation, an organization that promotes mental health and suicide prevention in an attempt to spread awareness and acceptance.   You can follow Janus and stay up-to-date on all upcoming music, artist and tour news via the following links:
Website | Facebook | Instagram | Spotify | SoundCloud | iTunes/Apple Music | Music For Good
After touring for years and releasing 2 albums with your band, you split with your band mates after becoming uninspired by the corporate side of the industry.  What did you find to be the most uninspiring part of the industry while you were a part of it?
I think it was mostly the timing and the dynamic of the folks involved. It was also tough to see radio change so much in the handful of years we were out there. Many of the locally run rock markets got swallowed up into a corporate playlist and we saw the markets change a bit. Being back actually separating the music from the business side of the puzzle has been rewarding.

You grew up in Maryland near the water and moved to Chicago later in life to start JANUS.  You have since retired from music, in the traditional sense of not recording albums and touring, and when the opportunity presented itself for you and your family to move to Lake Geneva, you went for it!  How has life changed for you since adopting a more laid back lifestyle?

My passion for music and making music has never been stronger. Focusing on mixing advocacy and my passion for music works really well with my lifestyle. My family life isn’t really set up to balance a lot of touring and traveling.

What can you tell me about your Neopolitan Pizza restaurant Oakfire in Lake Geneva.  When did your love of pizza, specifically Neopolitan style, develop?  What is the most rewarding part for you of owning and operating your restaurant?
As I took a break from music I developed a passion for the art and craft behind traditional Neapolitan pizza making. It’s 200+ year old Italian art form unto itself. As an artist by nature creating pizzas, paintings or music all pull from the creative drive to get something from nothing and make it beautiful so it was an easy extension. It’s been rewarding turning it into a restaurant because over the years I’ve developed a passion for the hospitality side of that business as well and it’s rewarding to be a part of someone’s goto spot while on vacation or local.

What inspired you to start your own label, Music For Good, from which you will be releasing a series of singles focused on building awareness on different causes?  How have you gone about deciding which causes to focus on and bring awareness to?

Starting the label to release singles allows us to have full control of where the money goes and how and when we choose to release material. Having that freedom inspired me to launch the label. I try to pick causes that I’m inspired about whether they draw from personal experiences such as having a family member dealing with mental health to growing up as part of a military family to Missing and Murdered Indigenous Woman which I’m inspired about but not personally connected to. From there once it’s triggered something in me to write a song about it. We’re off to the races to identify a worthy charity and we then focus on launching each single/video.

Your first single released is a reimagining of “Drive” by The Cars, saying that the lyrics really spoke to you as you have a family member who has struggled for years with Bipolar Disorder.  This release brings awareness to the disorder and you partnered with the JED Foundation that works to destigmatize the disorder.  How did you come to connect with them?  Do you have any other causes you are hoping to focus on that are personal for you?
Our publicist Jamie Roberts suggested them as a great organization that’s shining a light on mental health. MMIW as mentioned above is the next cause we’re working on.
Having been on a major label for years prior to this project, what lessons did you learn that you have been able to apply to running your own label?  On the opposite side, what did you learn not to do?  Do you feel you will bring on other bands/artists in the future who have the same goals/message as you?
I think the biggest thing I’ve learned is that things are changing in terms of the digital world very quickly. They aren’t the same as when we were signed and touring. So learning how to leverage that in relevant ways today is key.  I think we will someday sign other artists.

Your next release will be an original song and much heavier, much like your previous JANUS material.  You have mentioned focusing on releasing original material going forward.  Do you think you will do anymore covers or was “Drive” a one-off decision?
I’m totally open to more covers.
What can you tell me about your process for making music videos, as well as your plan to make videos to accompany all of the singles you plan to release?  Do you plan to direct them yourself or work with a director?  How did you get involved with ONErpm to help to promote your videos?
We work with directors and production companies on the video. They are unique to the cause and we try to start with the message and mission first and then draw on visuals and or statistics to support. ONErpm came onboard via our manager Roger Jansen.
What inspired your plan to create a t-shirt design unique to each single?  Will you be creating the designs yourself or collaborating with an artist/different artists?
I love t-shirt design in general and I think it’s a great medium to help get the message out there.
What are your long-term plans and goals for Music For Good?  What’s next for you?
The next single is my 100% focus. Each single each video grows and grows so sky is the limit!