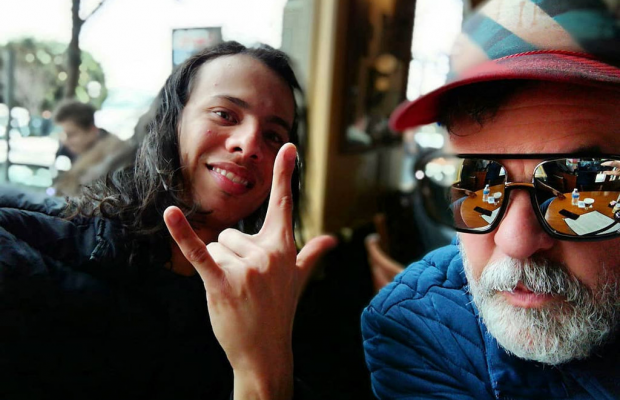 In February 2019, Ian Thomas Parks was living in Santa Cruz, California, about to celebrate his 51st birthday and contemplating his next step in life.  Ian, a long time veteran of the North American music scene, was frustrated with the state of his musical career.  Despite having so many almost famous moments, including an infamous run-in with legendary producer Rick Rubin, he had pretty much given up on the idea that music would ever amount to anything more than just a passionate hobby.
On the other side of the country, Jimmy Salas Poras (aka Jimmy Stardust) was freezing his ass off in the subways of New York City, playing solo loop versions of contemporary pop hits for busy commuters’ tips.  Traveling around United States, Jimmy came from La Fortuna, Costa Rica – a place, although supportive of his musical talents, that never embraced his desire to play original music.  So, he set out on a six-month journey through North America seeking opportunities to learn about North American music and possibly network with other musicians.

Using the website workaway.info Jimmy sent a very simple and short message to Ian saying “I will be be in California, would you like to make some music together?”.  Ian replied, “What do you play?”.  Upon discovering Jimmy’s unparalleled talent as a drummer, Ian enthusiastically invited Jimmy to come stay with him in Santa Cruz, California.  During his stay, Jimmy and Ian became quick friends and realized that they had a shared interest in musical influence, recording, and writing.  Immediately, they became collaborators.  As Jimmy’s stay in Santa Cruz was coming to an end, Ian decided that he would like to try and record a song he had written a while back titled My Stupid Heart.  Jimmy immediately took to the song and added the just the right amount of percussive thunder to make it move.  Before they could catch their breath, PLOMO was born. Releasing the self-produced song and video, after just two days of recording and shooting, the song and video were an instant internet sensation receiving more than 100,000 views in just one week while garnering accolades from listeners around the world.

After successfully recording the PLOMO album entitled Aguascalientes in Aguascalientes, Mexico with incredible Mexican producer Luis Naranja, Jimmy and Ian set off to the United States to play a series of shows.  Because of Jimmy’s immigration status and only having a tourist visa, the band waived any money that they would receive for these shows.  Upon arriving in the United States in the Salt Lake City airport, Jimmy was flagged by Homeland Security, who decided he was trying to illegally live and work in the United States.  He was deported back to Guadalajara, forcing Ian to continue on to Denver Colorado.  Because Jimmy had some of his valuable music equipment that he relied upon in Ian’s luggage, Ian decided to return to Guadalajara to return these items so that Jimmy could go home to Costa Rica. While in Guadalajara, Jimmy and Ian we’re able to play a show at the Experorio plaza in Chapultepec Guadalaja.  While walking around the plaza Ian saw a street performer Dante Castañeda Cid working with marionettes and the music of Motorhead.   The band had long considered Lemmy to be the patron saint of PLOMO, so Ian saw this as a sign and asked the street artist for his contact information. After some brief exchanges on Instagram it was agreed upon that Dante would help PLOMO make a music video.  Setting up a miniature rock concert stage in Cafe Rendezvous, Dante and Ian recorded the music video for the song “Major Tom (Coming Home)”, a cover of the amazing song by Peter Schilling.  The band has chosen to record this song because of their deep love for David Bowie, and the song is well known to be an ode to David Bowie’s song “Space Odyssey”.  Today sees the release of their video for the song, their most epic video yet.  You can follow PLOMO and stay up-to-date on all upcoming music and artist news via the following links:
Facebook | Spotify | Bandcamp | Instagram