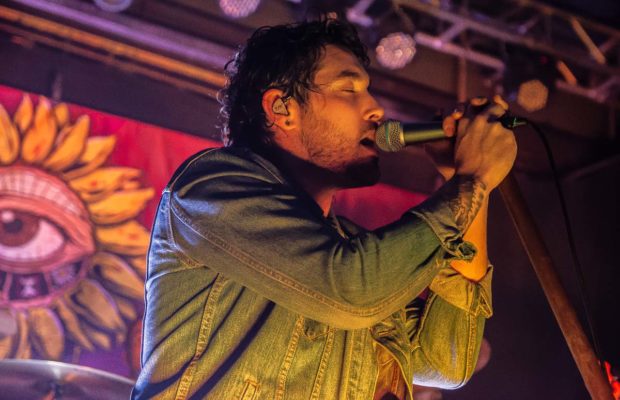 Ohio alternative rock band Red Sun Rising, currently touring the country on The Peel Tour in support of their recently released Peel EP, made a stop in Louisville, KY recently.  Although this Thursday evening started out a bit sparse, more and more people showed up as the evening progressed, giving the band a great turnout!  Having arrived to the venue early to secure a spot at the front, I noticed several fans in line wearing Red Sun Rising t-shirts who were excited for the evening ahead.  Having formed in 2007 and with many tours under their belt, the band has gained an ever-growing following of passionate fans.  The band took the stage to roaring cheers and screams, starting things off with “Imitation” from their 2015 album Polyester Zeal and performed a nice variety of songs throughout the evening.  The band had their own lighting set up for the show and were awash throughout their set with gorgeous hues of white, yellow, red and blue lights.  They also had a large banner hanging behind the elevated drum kit at the back of the stage with the artwork for the cover of their 2018 album Thread, which is a field of sunflowers with an open eye in the centers of the flowers.

Singer Mike Protich chatted a bit with the crowd throughout the evening, telling them “Louisville, thank you for coming out!  If I’m not mistaken, this is our first time headlining a show in Louisville.  We’ve been here a few times before as support acts and for Louder Than Life Festival.  As you know, we normally have 5 band members but there are only 4 of us on stage.  Our guitarist Ryan had to sit this tour out due to his first child being born!  He couldn’t miss that.  Cancelling our tour wasn’t an option so we figured out a way to make it work with the four of us”, which earned the band a great deal of applause.  Red Sun Rising is an incredibly fun and energetic band on stage and spent their entire set engaging the crowd, with Protich, guitarist/vocalist Dave McGarry and bassist/vocalist Ricky Miller spending plenty of time at the front of the stage, performing directly to the crowd and leading them in sing-alongs!  Perched on a platform high above the stage, drummer Pat Gerasia was a whirlwind of energy, with McGarry, Protich and Miller periodically interacting with him during the set.  Performing tracks that included “Emotionless”, “Amnesia” and “Push”, the band ended their pre-encore set with “El Lazo”, “The Otherside” and “Evil Like You”.

After exiting the stage briefly, Protich and McGarry came back out on the stage, with Protich telling the crowd “This is our first night of tour!  We’re knocking the rust off with you here in Louisville!  We just put out an EP (Peel EP) of acoustic songs.  We are a rock band at heart, but sometimes you wanna slow things down a bit and have a glass of wine or a margarita (said with a coy smile)!  We decided to put out an EP with some of our songs stripped down”.  He and McGarry then proceeded to perform an acoustic rendition of “Blister”.  The rest of the band then came back out to perform an acoustic rendition of “Left For Dead”.   The band ended the evening with “Deathwish” from their album Thread.  They gave a high-energy and engaging performance for their fans, hanging out after the show to chat with the crowd.  It was a fun evening of music and a great way for the band to kick off their tour.  Los Angeles  rock and roll band Dirty Honey and Nashville rock band Goodbye June opened the show.