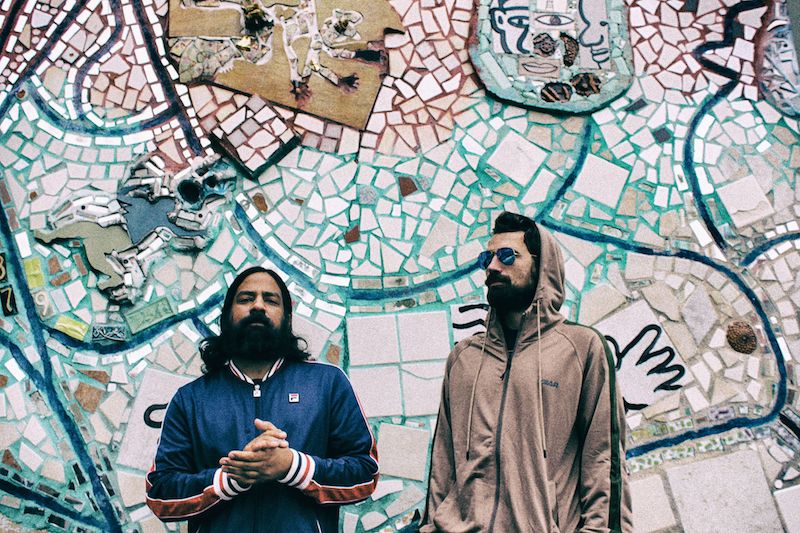 After years of working together on each other’s personal musical projects, long-time Philly stalwarts Fried Monk (Lucas Kozinski) and beautiful-fortune (Jameel Farruk) are now combining their electronic hip-hop and indie sounds for the groove-laden EP Here As One, out May 7, 2021.  In anticipation of the EP’s release, the two recently premiered the first single “Planet B” with Spill Magazine!   The release of “Planet B” lines up perfectly with the sunny late-Spring weather, exuding unfettered head-bopping vibes over celestial synths and drums that recall electronic indie and hip-hop mashups circa 2010 like Gorillaz, Kid Cudi, and STRFKR.  The free-flowing lyrics, beaming backdrop, poppy guitar, and funky bass dance their way to a luminous carefree track.  “Planet B” was fully realized by the end of the first day that Kozinski and Farruk collaborated in the studio.  On a creative roll after laying out the structure for the EP’s opening track “Patient Zero,” the two jumped right into producing an euphonious electric guitar piece, and with the addition of a wildly catchy vocal line, it became their lead single.

“I’m overly curious about the sun.  I’m borderline obsessed with it,” says Farruk.  “As a solo artist, I can’t help myself from having referred to the sun over and over throughout my catalogue of songs.” Combining this fascination with the all too common experience of a bad breakup, Farruk dove into his personal history and called “Planet B,” “a declaration of my acceptance of a life without her.” Unable to shake the entrancing and groovy spirit of the track, the two both knew this was going to become the single from the start.  For over a decade Kozinski, under the moniker “Fried Monk,” has been creating dusty boom bap and downtempo electronic tracks in Philadelphia, where he is also the co-owner of Sleepless Sound recording studio.  It was there that he began working with Farruk, who was recording under the nome de plume “beautiful-fortune” and his melodious alternative indie-rock releases.  Being so familiar with each other’s music, Here As One flowed quickly and instinctually from their minds to the recording, giving the three-song collection the confident drive of two artists who know how to highlight their distinct sounds.  Farruk explains the process: “We didn’t arrive with a concept in mind, any unified theme, or a particular statement in mind to make with these songs.  All we knew was we wanted the ability to explore and create without any boundaries or restrictions.  Verses were often written on the spot, and in just a few minutes.  We never went back to punch in a new verse or make any deliberate changes.  The first drafts are the final drafts.”

The EP opens with the raucous slow driving beats, atmospheric synth, and layered vocals of  “Patient Zero.”  “It would be foolish to deny that the extraordinary time we’re living in didn’t have a hand in shaping something or another about this EP,” comments Farruk.  “While we’re all experiencing this pandemic together, each of us is experiencing it from our own perspective.  That’s not just the pandemic.  That’s life.  Each of us, while humans, have our very own interpretation of the human experience.  At its core, “Patient Zero” is all about having empathy for one another.”  After the funky drive of “Planet B,” the EP ends on a poetic and multifaceted track called “That Simple.”  Recalling the song’s theme of time, Kozinski explains, “Days turn into weeks, weeks into months.  I constantly have to remind myself to enjoy the moment before it becomes a memory.  The lyric ‘We’ll talk some other time’ is leaning into that idea.  We often say we’ll get together with an old friend and a month goes by before any attempts are made to hang out.  I don’t understand how people get bored with free time.  There will never be enough hours in the day for me.”  Starting off with verses of melodic guitar and pensive vocals, the track soon dives into a grim folk-like movement coupled with a mix of low and hi-fi vocal tracks.  Ultimately “That Simple” bursts into a defiant chorus, reprising the first verse from “Patient Zero” and bringing the EP to a full circle.

You can connect with Fried Monk via the following links:

You can connect with beautiful-fortune via the following links: