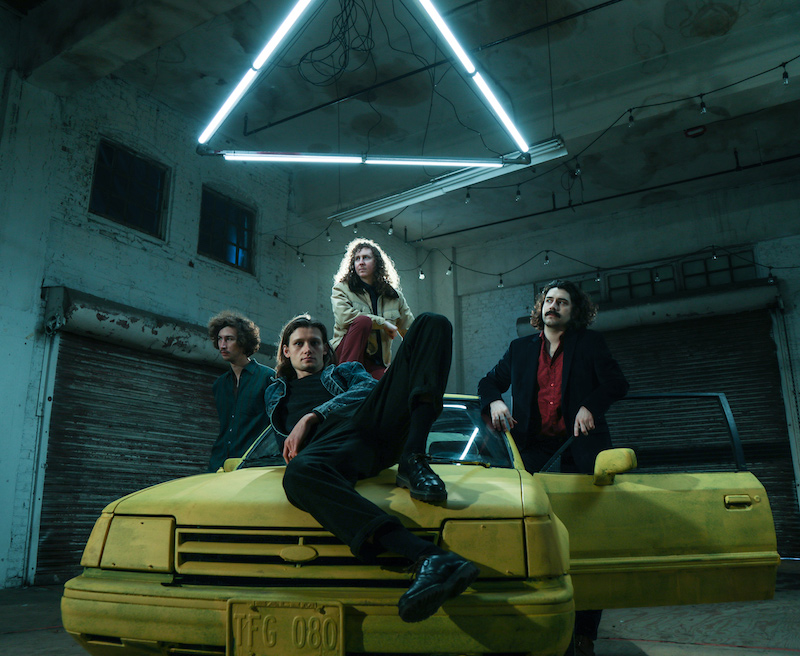 In 2011, a group of 15 year old high schoolers from LA, raised on healthy doses of 90’s-era post-punk and grunge, with just enough old-school classic rock thrown in, came together to develop their own sound and started writing and playing original songs nearly from day one.  The kids, now called Forty Feet Tall, began playing around Los Angeles in classic venues like The Troubadour, Roxy and the Whiskey.  Throughout their last couple of high school years, Forty Feet Tall built themselves a loyal base of local fans by playing parties and shows throughout LA.   College brought them to Portland, OR, where they continued to play locally while focusing on finishing up school.  With the addition of bass player Brett Marquette in 2017, and new drummer Ian Kelly, childhood friends Cole Gann (lead singer/guitar) and Jack Sehres (guitar) had completed the circle of Forty Feet Tall with a band to be reckoned with, kicking out some of the best rock songs you’ll hear today.  In 2014, the band released a self-titled full length album while still in college and followed it recently with an EP called Red Dressed.  A number of their songs have been licensed and featured on shows like Showtime’s Shameless, the Arnold Schwarzenegger vehicle, “Killing Gunther,” the Paramount film “Drunk Wedding” and several MTV spots.

The band recently released their new album A Good Distraction via Magnetic Moon Records.  “All of these songs were written before the pandemic, but many of them already had a strong political bend and hopefully speak to all the bullshit that we’re going through now,” says the band. “There are definitely love songs in here, but the overall theme for this album, or what it came to be, was some sort of semblance of a welcomed distraction in the midst of chaos.  In the end though, no matter how tempting it is to turn a blind eye, we have to confront these ills – the racism, sexism, xenophobia, classism and outright fascism we see in this country and throughout the world.  We try and walk a line making our music a blast to listen to, get you to a place where you can let loose, but simultaneously challenging the listener to survey and contemplate the state our world is currently in.” “Musically, it feels easy to just say it’s just rock, but you can hear all the different influences, whether it’s punk, grunge, psych or jazz,” they continue. “We all have different likes and dislikes, but we come together on musical preferences where it counts and each one of us brings an element to the writing table. This album really showcases that. Since our move up to Portland, we desperately wanted to walk away from our blues-rock, riff heavy leanings when we were in highschool. Portland gave us a much more garage-y, fuzzy sound and that’s definitely where everything else is headed.”

“In a lot of ways, what we have now, though we kept the name, feels like a brand new band,” the group adds. “The album has leanings to punk and psych and we started really diving into bands such as Parquet Courts, King Gizzard, Unknown Mortal Orchestra and the Oh Sees. There’s also a lot of influence from early Elvis Costello records.”  Forty Feet Tall is moving forward at a rapid-fire pace as one of the most exciting new bands in rock music today.  Their live shows are an explosive display of aggressive intensity, grounded by the songs that are the reason people keep coming back to see them again and again, and why they’re bringing new fans with them each time. Keep your eyes out and don’t blink for too long or you’ll miss the next move from this fiery young band.  You can connect with Forty Feet Tall via the following links.  Photo credit: Billy Portier.