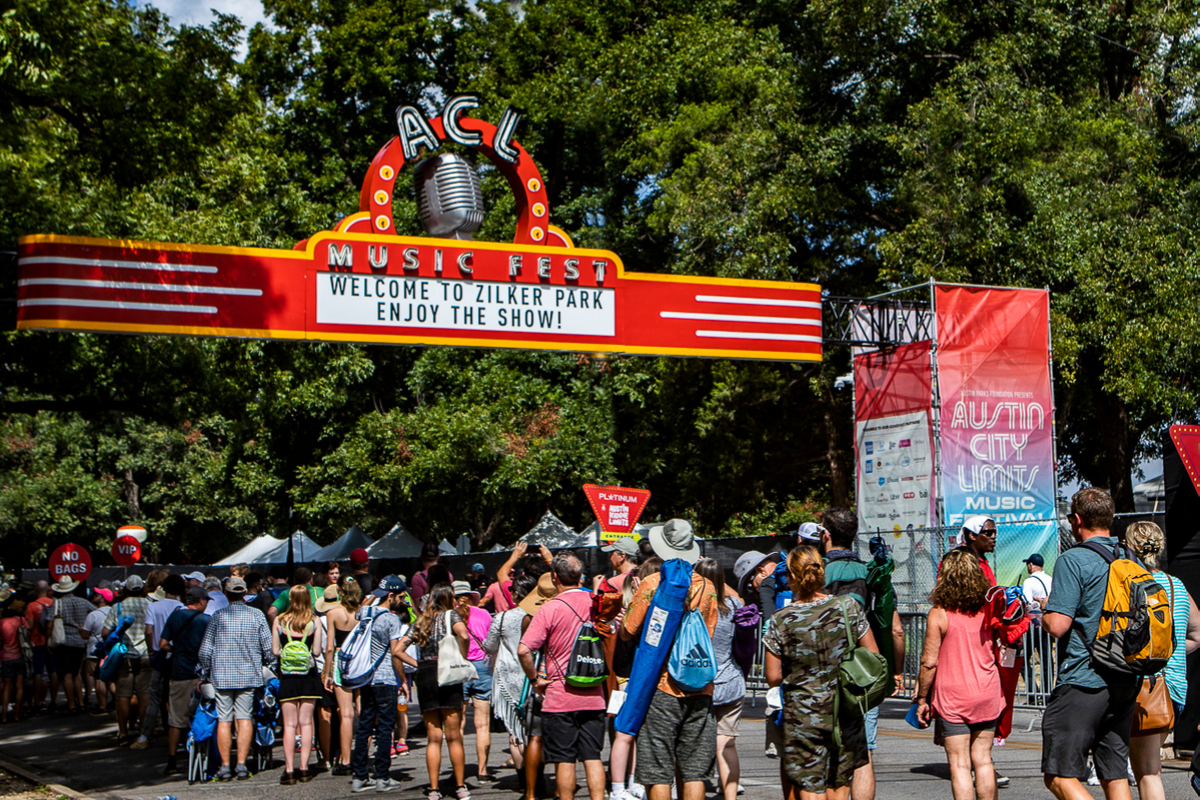 Let’s talk about my weekend at Austin City Limits festival. While crowds of people walked towards Zilker Park in anticipation of the festivities about take place. I was trying to calm myself. This was my first year attending ACL. Reaching downtown was as easy as calling an uber or using the shuttles ACL Fest provided at Republic square park. This year they had three entrances Barton Springs East Entrance, Bart Springs West Entrance and Lady Bird Lake Entrance. While there were plenty of people, getting in was a breeze. At each Entrance you will go through security. You will get a brief pat-down, check your bags and lastly scan your wristband to enter. This process goes by pretty fast and is a smooth transition into the park.

When you first enter the park you’re in the middle and surrounded by multiple stages spread across 4,100 sq.ft of land. There was a total of eight stages American Express, T- Mobile, VRBO, BMI, Honda, Miller Lite, Tito’s Handmade Vodka, and Austin Kiddie Limits. Although there was little shade Barton Springs Beer Hall aided in shielding you from the heat.

I had so many options to choose from. Tiff’s Treats was pretty awesome if you have a sweet tooth like me. Torchy’s is a given, bomb ass tacos! JuiceLand to quench your thirst. Speaking of thirst, at this point I’m already drenched in sweat. I was trying not to die of a heat stroke. It was so HOT! Hydration is key! For those needing a break from music, grab you an ice-cold beer from the Barton Springs Beer Hall. Watch a football game, cool down and relax. Staying hydrated goes hand in hand with having a great experience and keeping it that way. You can head to one of the many CamelBak Hydration water Stations to refill your water bottle or hydration pack.

We know ACL is all about the music, but they had something for all age groups. ACL offered Austin Kiddie Limits, which was a hand full of activities for the kids to interact, dance and sing-along for a rocking good time. There was yoga, hip hop, Drumzone and ton of music. Alex’s lemonade stand a for sure favorite, Kati’s Tattoos, Kiddie Lounge, Ping-Pong tables, Tag-a Kid, and a Rock Start Photo Booth.

ACL offered the Art Market which included accessories, head gear, posters, clothes, boots and art. Silent Disco powered by Quiet Events was at the festival each night. You would swing by the Tito’s Handmade Vodka Stage to grab your special headphones to get pumped and listen to your favorite DJs. There were plenty of activities around the park to help you relax, charge your phone, get free swag and take unforgettable selfies with the large-scale art installations. Bathrooms were scattered throughout the festival all were kept in great condition. Sanitizer was provided which made staying clean easy.

Billie Eilish put on such a great performance. She had the whole crowd vibing to her beat. She even split the crowd to make a mosh pit. That’s what I’m talking about! Billie knows how to rock! Lizzo had the biggest crowd, no doubt! Everyone young and old couldn’t help but sing along to her music. Some people missed out on this opportunity as the crowd was so massive. The truth is every artist was amazing and rocked out for their fans.

I look around, I see everyone vibing to their own energy. It’s a vast range of genres. Everyone has their own thing going on. There were kids, toddlers, adults and teenagers. Whether they are swaying to the music, enjoying some delicious food, bobbing their head, laying on the ground or taking selfies. You could tell everyone was in a state of pure bliss. I couldn’t help to feel such positive vibes and happiness. This was an experience of a lifetime! One that I hope to experience next year and years to come.

There were a couple of artists who couldn’t make it due to unforeseen circumstances. The Kooks, Sam Fender, and Lil Uzi Vert.  Each Stage had its own various artist the whole weekend. Each uniquely put together to deliver the best live performances. After all that’s what ACL is known for, the best live music. If you been at the Festival all day and haven’t had your fill. Check out the ACL Fest Late shows. This is a way to cool down and check out even more of your favorite artist. These include some of the venues you know like Stubb’s Waller Creek Amphitheater, Emo’s Austin, Mohawk, Scoot Inn, The Parish, 3Ten, Antone’s, Stubb’s Indoors and The Continental Club.

One thing is for sure. If you get the chance to attend ACL, do it! You won’t regret it. Hands down ACL was an AMAZING EXPERIENCE! To get a peak at the fun I had check out the gallery below.