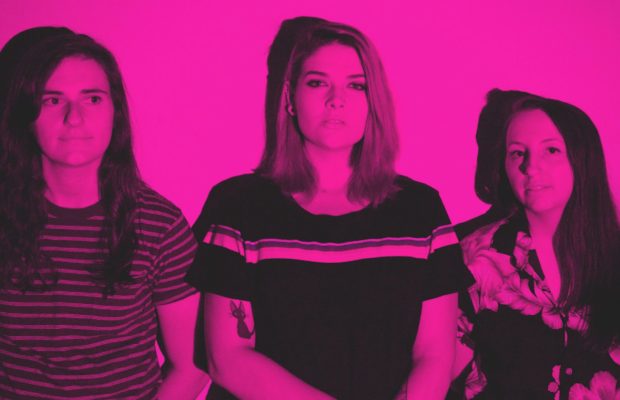 Hailing from Boston, Massachusetts shallow pools is a pop rock trio consisting of Glynnis Brennan (vocals, bass), Jess Gromada (guitar), and Ali Ajemian (drums), a band they’re dedicating themselves to creating insightful personal music based on their lives while also fighting for inclusivity. I talked with band over email to get a little more insight about what inspires them and what they believe in.

Q: How did the band get started? I dig lowercase stylization of the name, what inspired that?

A: Jess and Glynnis had been friends since middle school and in high school met Ali.  We all liked playing music and did a lot of acoustic covers together and then in 2016 we decided to start writing our own things as a band!  We released some songs under an old name and played a bunch of shows then in 2018 decided it was time for a rebrand and shallow pools was born!  The lowercase stylization doesn’t have much of a story, we just preferred the way it looked!

Q: Who are the bands biggest influences?

A: We love jimmy eat world, paramore, movements, and so many other bands!

Q: As band shallow pools is fighting for inclusivity. What does that mean to you and what role does music play into that fight?

A: We think inclusivity is extremely important and we are trying to be super candid about our identities as women, members of the LGBT community in order to maybe have someone see what we are doing and be inspire to embrace their own identities. Representation is so important and seeing people like you, or in respect to music hearing people talk about things you’re dealing with, makes you realize and become more comfortable with the that you’re not alone and there are other people out there going through similar things to you. So we hope we could use music as a platform to promote those feelings!

Q: Your debut single “It’s a You Thing” released back in July, what about the song stood out to you to make if shallow pools introduction to the scene?

A: We felt like the song was different than anything we had ever made as a group before and wanted people to know the direction we were going in right away. The synths, vocal/drum effects, topic, layered guitars, and vibe were the first thing we wanted people to get from us!

Q: What was filming the music video for “It’s a You Thing” like?

A: Filming “It’s A You Thing.” was super fun!  Ali edited it and directed it along with our friend Andrew Young so we were all super involved in the process from conceptualization to the final export; we are so happy about the reception it’s gotten!

Q: How many days did you guy spend cleaning finding glitter and confetti after shooting? Haha

A: There is still glitter all over Ali’s drums. Every time we have a show she has to vacuum her car and it’s been almost 3 months.

A: “Sinking” is about the struggles of dealing with anxiety and the challenges it brings on a daily basis. The song explores the fear of opening up to others and asking for help.

Q. With 2018 coming to close soon how does shallow pools plan on spending the rest of the year.

A: We are finishing up recording, releasing an EP, and playing as many shows as we can!