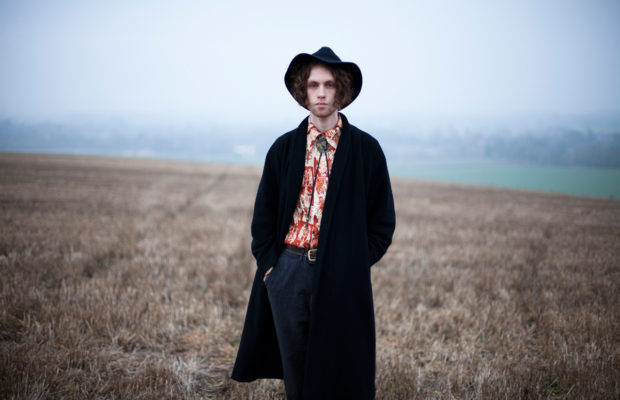 My heart dropped a little when I was asked to review Brighton based Tuval’s new EP “Overseas”. With his dark mop of hair and woeful expression, I was deceived into believing I already knew just how his music would sound. Yet my shallow judgement of Tuval’s music were rewarded with a delicious and surprising depth.

The Overseas EP is full of music from another time and another place. It’s a strange yet intoxicating mix of 70s psychedelia, haunting 80s new romanticism and 90s grunge-y self-pity. Jeff Buckley-esque with progressive echoes reminiscent of Led Zeppelin and Deep Purple, Tuval’s musicianship is wholesome in its simplicity yet complex in its sound.

The opening track Girl Through Sand demonstrates skillful production with strings, layers of vocals and honeyed guitar licks swirling around the listener, before plunging rollercoaster-esque into frenzied distortion with a sense of youthful urgency.

Title track Overseas washes over the listener with a sound that pulls forth images of hazy summer afternoons before twisting into nightmarish direction à la Gene Wilder in 1971’s Charlie and the Chocolate Factory. The listener is lost in a sea of sounds before given a chance to breathe in the soft close of the song, most likely a little shaken by the intensity of Tuval’s pendulum swing of sounds and time signatures.

Track three By The Sea rolls into a heavy opening that isn’t a million miles away from Deep Purple’s iconic Black Night before breaking into a jolly jaunt more reminiscent of The Kinks. Like the title track before, Tuval gives the listener a false sense of security before submerging them back and forth into a crescendo of sounds and effects, replicating wave sets and continuing the ocean theme that connects the 4 track EP together.

The final Some Planes Fell begins with in a homage to Buckley’s Dream Brother before, once again, heading in a completely different direction. Languid tones are replaced by preppy and poppy verses which are catchy enough to be effective but original enough to not be grating. Tuval’s ability to move from music to silence, soft to hard and classic to fresh is a skill many older and more experienced musicians are yet to grasp. The sharp ending leaves listeners straining to hear more; it’s a cliffhanger and you need to know where this young Brightonian’s story is going.

Tuval captures a time and depth beyond his 20 years and, whilst there’s more to be developed in the homemade quality of the EP, the Overseas EP is an epigraph for what is likely to be a great catalogue. It’s remarkably original despite constant references to classic musicianship and acts as a stunning example of the old adage “never judge a book by its cover”. Or rather, “never be stupid enough to think you know what a 20-year-old with a solemn expression and guitar sounds like at the risk of missing out on some truly good music”, but that’s not as catchy.

Stream the EP here and buy it here.