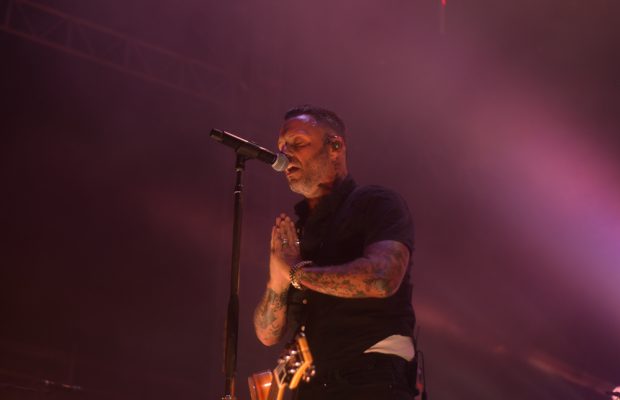 I had the pleasure of getting to attend the first-ever Houston’s Music and Arts Festival. A new festival in Houston, Texas that was being put on Blue October at the White Oak Music Hall. The Houston favorites had help setting up the festival with help Coolers Light and local alternative music station 95.5 FM The Buzz. Processed were raised at the event for Assist the Officer, a non-profit dedicated to helping a fallen or injured police officers in Houston Police Department, a nod to Blue October founder Justin and Jeremy Furstenfeld’s father who was a police officer.

The festival took place an hot, but cloudy day in Houston, Texas. Along with great bands and food trucks, the festival invited local tattoo artist and barbers out to the event. Inside the venue where small plans played you get treat yourself to a haircut or a tattoo. The festival took place at 2 pm. I spent most of my early time watching bands inside because it was much nice with the AC. Some acts I enjoyed inside were Solitude Endeavor, The Baffle, and Christian Sparks & The Beatnik Kids.

Ben Kweller, a personal favorite of mine followed The Band Hennessy. With the sun still hotter than ever, Kweller played this hair out with long ginger curls covering his face. I couldn’t help but feel a little concerned but he’s the rock star, not me. Kweller’s set was a little too fast for my liking, but that’s just because he’s so amazing live. However, I was not made when Morgxn took the stage.

Morgxn skipped on stage with a beautiful paper fan to cool himself off, good thing he did, because the definitely broke a sweat on stage. The first time I got to see Morgxn perform it was a small stage. The stage in the lawn of White Oak Music Hall was much better for Morgxn as he danced around the stage and giving it all. Although at first I was confused about how Morgxn fitted into the line-up of the festival, but honestly, I stopped caring, but he’s so captivating live. And the crowd was eating it up. The confidence that Morgxn generates is enough to make everyone feel secure and able to let loose a bit.

While trying to cool off a bit I caught the end of Hold on Hollywood’s set. I’d seen the band walking around and taking photos with fans all day. I only was able to catch the last two songs of their set, but they were great and had a great crowd!

Back outside before Blue October took the stage there was one more act. Robert DeLong is a musical tech wizard. The electronic musician had a big job keeping the crowd that was ready for Blue October entertained, but I’m sure it was a cakewalk for DeLong, who took the stage in a suit and tie. He absolutely killed it. Performing as the sunset behind him. As people filed out of the inside to find a seat in the lawn for finale act or just see the spectacular he was putting on. If you haven’t had the chance to see Robert DeLong, I highly recommend it.

Last, but not least were the golden boys of the hour. As the sky shifted into the night a trailer for the bands upcoming documentary “Get Back Up” was projected into a screen. It was interesting to get a glimpse at the band’s history while also being a part of the band’s history. Getting to attend the first of what will probably become an annual staple of Houston culture was really rewards and it’s not a small feat by the band. After the trailer, the lights went completely dark and then turned a stunning blue, all you could hear was the cheers from the crowd behind me. Besides living in Houston my whole life I’d never gotten a chance to Blue October perform, but as proud Houstonian, I was happy that this was the way I got to see them.

Thought out the day there was a common theme of this being a celebration of Houston. It was impressive for the first-ever festival and Blue October seems excited for putting on the next one. I was really happy with the diversity in sound and that variety of businesses. I’m excited to see 2020 will hold.