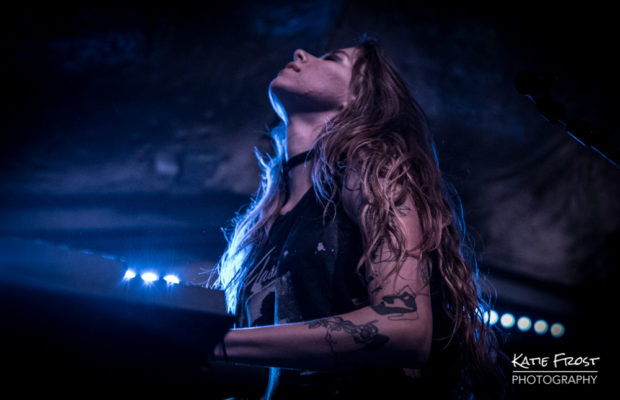 Courage My Love with New Volume

The last time I saw Canadian pop/rock trio Courage My Love play a headline show in the London was back in November 2017 when they played The Borderline. Tonight’s show at Thousand Island was the penultimate show of a seven-date co-headline tour with New Volume which saw them play a variety of venues and festivals around Europe and the UK.

When I arrived at the venue shortly before doors opened there was already a queue of eager fans excited for the show. With only two bands on the bill this evening there was just over an hour to wait before Courage My Love took to the stage around 8:15pm to rapturous applause.

Courage My Love are Mercedes Arn-Horn (vocals, keys & guitar), Phoenix Arn-Horn (drums, backing vocals) and Brandon Lockwood (guitar, backing vocals). They always put on a fantastic show and tonight was no exception; all three band-members were animated and have great on-stage chemistry between them. The trio looked like they were having a brilliant time as they played tracks including “Stereo” from their latest album Synesthesia (2017), as well as “Breathing Room” from their debut album Becoming (2013), and a cheeky cover of “Electric Feel” by MGMT. There was a fantastic atmosphere in the room for the duration of the band’s set, and Mercedes interacted directly with the crowd at various points; including sitting on the front of the stage to be closer to fans. Courage My Love will return to the UK in November supporting As It Is, so be sure to check them out!

Tonight was the turn of South Africa-born and now London-based alt-rock trio New Volume to headline. They opened their set with “Turn Off The Light” from their debut album Envy (2016), and played a brilliant set featuring other tracks from the album. This was my first time seeing New Volume and I really enjoyed their electro-rock sound. Like Courage My Love before them, New Volume put 110% into their performance and their set went down tremendously with the packed room. Although there were just three of them, the band produced a big and complex sound. Tyron Layley put on an impassioned performance on vocals and guitar, matched perfectly by Ryan Morris (also on guitar and vocals), who also added depth to the band’s sound with some fantastic synth action. Adam Jenkins kept the trio together with his animated and relentless beating of the drums. New Volume are a band I would definitely go and see live again.