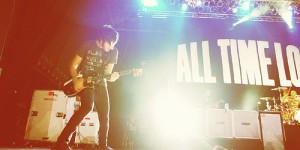 All Time Low’s tour schedule is exhausting. Seriously. This year has been exceptionally busy: earlier this year, they were over in the UK for a tour, then, back to the US on the Dirty Work tour, then, in June, they released “Dirty Work”, and after that, they came back for round 2 of 2011 touring, the “Gimmie Summer Ya Love” tour, and that’s being followed up by a 2nd market US tour (The Rise and Fall of My Pants) from October-November. I mean, just thinking about it makes me tired, but this band and their crew are a force to be reckoned with. The last day of the Gimmie Summer Ya Love tour at Stage AE in Pittsburgh, PA had a wonderful lineup—We Are The In Crowd, The Cab, Cartel, The Starting Line, and then All Time Low closed it out, putting on a fantastic show. (It was ‘considered’ the last day of tour because the hurricane had canceled the show the next day in Niagara Falls. That show has since been rescheduled for October.)

We Are The In Crowd has been gaining popularity among their scene, touring with bands like Forever The Sickest Kids earlier this year, and their infectious, bouncy music has managed to capture listeners from all over. The crowd at the Pittsburgh, PA show was completely into their set, despite the heat and despite lead singer Tay Jardine’s microphone not working through the first half of the song. We Are The In Crowd is a band that everyone should check out, because they’re growing in popularity and are a definite band to keep an eye on.

Following WATIC was Las Vegas group The Cab, who has been under the radar in terms of touring and releasing new music over the past few years. Hearing that they would be on the GSYL tour was a very pleasant surprise. The Cab has a great sound not only on record but live as well, they’re one of a few bands that manages to accomplish that. Their piano-infused, energetic live show was a good mix of old songs (old favorites like ‘Bounce’) and new songs from their latest album, Symphony Soldier (‘Bad’). Their performance on the GSYL tour definitely made it known that they are back, and they are armed to the teeth with new songs.

Up next: Cartel. Cartel’s music has always been solid, including their live performances. Every time they announce a tour, people get really excited because their shows are so great, and their sets are always a good mix of older songs and newer stuff. Their sound has always been a little different than that of other bands, and part of it is simply lead singer Will Pugh’s voice. But the band knows how to put on a good show; they’re always energetic, know how to get the crowd moving and singing along, and their performance was wonderful from beginning to end.

Finally, All Time Low. This tour was the first US tour that they played new songs off their June release, Dirty Work, and right from the beginning, the translation of the songs from record to live was unbelievable. ‘Do You Want Me (Dead)?’ is an exciting way to open up a show, and other new songs: ‘Forget About It’ (which includes a monologue by lead singer Alex Gaskarth, was screamed back at him by all the fans in the crowd, hand motions and interpretations of the words included), ‘Time Bomb’, (which was actually introduced on ‘Dirty Work’ tour) and the best surprise of the night was probably the inclusion of an old favorite for many fans—’The Party Scene’. Of course, they slowed it down near the end with old favorites, Nothing Personal’s ‘Therapy’ and So Wrong, It’s Right‘s ‘Remembering Sunday’, before launching into their raucous finale. All Time Low always manages to put on shows that are full of energy, and the boys in the band know how to do it. They talk with each other, crack jokes, interact with the fans. It’s easy to see that this band appreciates their fans. From the beginning of the set to the end, there was never a dull moment, which is probably one of the signature parts of All Time Low. Their shows are never boring.

All in all, Gimmie Summer Ya Love was a wonderful tour that was a great way to close out the summer for this reviewer, and, judging by the cheers and gleeful screams, for the hundreds (thousands?) of people that were in the crowd that night. I always look forward to this band’s shows and if you can make it out to the Rise and Fall of My Pants tour, make sure you get tickets quick!