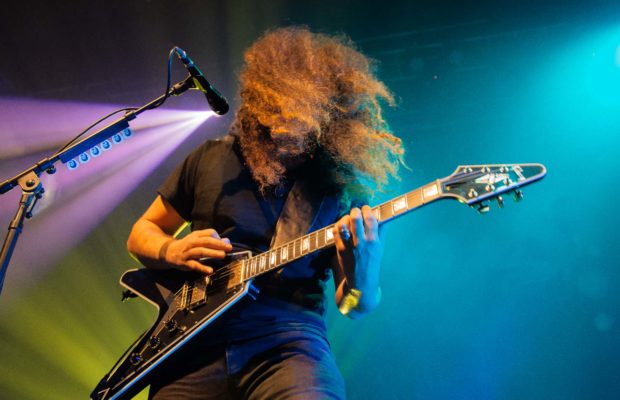 Coheed and Cambria with Maps & Atlases and Thank You Scientist

Coheed and Cambria brought The Unheavenly Tour to Louisville, KY recently, performing to a sold out crowd of fans!  Having just released their latest album, Act 1: The Unheavenly Creatures, many fans this evening were anxious to hear them perform a selection of their new songs live!  The crowd rushed into the venue as soon as the doors opened, with a lucky few securing their spot at the barricade.  As the lights dimmed, “Prologue” played over the speakers as the band readied themselves to take the stage.  Taking the stage to a roar of screams and applause, the band launched into “Dark Sentencer” from the new album.  Performing several other new tracks this evening, including “Unheavenly Creatures”, “The Gutter” and “Old Flames”, the band also performed classics hits such as “Here We Are Juggernaut”, “Blood Red Summer” and “In Keeping Secrets of Silent Earth: 3”, during which the sound of the crowd singing along almost drowned out the vocals of singer Claudio Sanchez!  Several times during the song, Sanchez turned the microphone towards the crowd and let them sing, a smile plastered on his face at the passion with which the crowd sang!  Sanchez thanked the crowd towards the end of the set for coming out, mentioning that it was the second to last show of the tour.  He then picked up his acoustic guitar and performed “Wake Up”, followed by “Island” and ending the set with “Old Flames”.  After leaving the stage briefly, the band came back out for a two song encore.  Starting the encore with “Gravemakers and Gunslingers”, the band ended the show with “Welcome Home”, leading the crowd in one final sing along!  They gave their fans a great evening of music and a fun and energetic performance.  Chicago indie rock band Maps & Atlases and New Jersey progressive rock band Thank You Scientist opened the show.