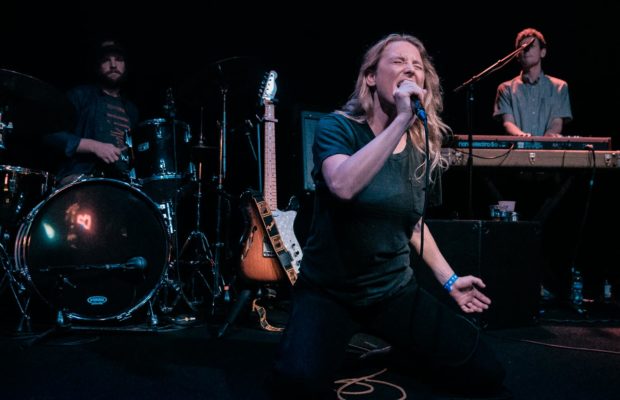 Illinois singer-songwriter Lissie, who is touring in support of her latest album Castles, made a stop in Louisville, KY recently to a packed house!  As she and her band took the stage, she told the crowd “Good evening!” and started things off with “Meet Me In The Mystery”, performing a nice selection of songs throughout the evening that included “Shroud”, “Hero”, “Sleepwalking”, “Love Blows”, “Blood and Muscle” and “Further Away”.  She then took a moment to chat with the crowd a bit, thanking them and telling them how happy she was to be in Louisville for the second time.  She then mentioned that she had grown up in Rock Island, IL and wrote a song about the Mississippi River, taking that moment to sing her song “Oh Mississippi”.  She then told the crowd that they were awesome and thanked Amy Stroup who opened the show and was her support act for the tour.  She said they were all going home the following day and wished the crowd a happy almost Thanksgiving, proceeding to mention that her birthday was coming up soon as well.  She joked that she was shamelessly plugging her birthday and that everyone should buy all of her march as a birthday gift, which got a few laughs from the crowd, and then sang “Castles”, the title track from her new album.

During a break in the set, a couple of guys in the crowd shouted “Do you like bourbon?” to which she responded “I do like bourbon but I get too drunk if I have too much!  I had some Old Forester today.  I will have some after the show!”, leading several fans to bring her shots of bourbon which they set on the stage for her!  A bit later a fan handed Lissie a note on a paper towel asking if she would play at her wedding which elicited a “Maybe!  I’m going to put this in my back pocket and examine it later!”.  She then called out a few fans in the front who had been at her Nashville show the night before, thanking them for being at this show, as well.  She joked that it made her feel really cool!  After a couple more songs she introduced her band and thanked them, as well as the band’s Tour Manager and the venue, saying how it takes a lot of people to make each show happen.  The band ended the set with “Little Lovin'”, for which Lissie got the whole crowd to dance and participate in a sing along.  The band and the entire crowd was in high spirits when the song was over and weren’t ready to see the evening come to an end just yet!  Although the band left the stage briefly, they almost immediately came back out to the crowd singing “Happy Birthday” to Lissie!  She thanked the crowd for bringing the band back out and for singing to her, telling them how wonderful they were!  Starting the encore with “In Sleep”, she then said “As we head into the holidays, I hope you all have a happy holiday.  I wish you all peace.  Take care of yourselves and each other and know that you are important and loved.”  Mentioning that in our own sphere of influence, we can be the change we want to see, she ended the set with the song “Peace On Earth”.  Lissie is one of those singers that is mesmerizing to watch, a singer that feels what she sings and exudes a passion as she performs that will send chills up your spine leave you in awe.  She gave her fans an incredible performance, some engaging dialogue and a great evening of music!  Nashville indie pop artist Amy Stroup opened the show.