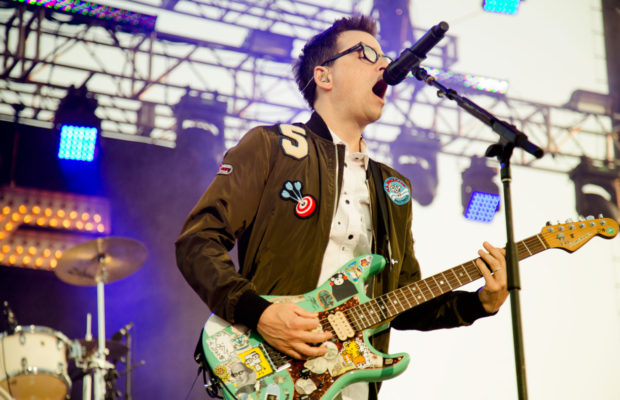 City Of Trees gave wistful summer-festival lovers a chance to catch live music before the cold winter days approach. The one-day Sacramento festival started just last year and already it offers top notch performers, a lively environment and a waterpark next door— thanks to this year’s new and improved location at Bonney Field at Cal Expo.

The festival offered three stages, each with its own appeal.

The Sacramento tent  was located in one of the busiest areas of the festival, surrounded by food trucks, beer tents, and impromptu clothing boutiques. The tent had a DIY vibe to it because attendees could see musician’s load and set up equipment as they walked up. The stage was small, low to the ground and offered a more intimate setting for music lovers to check out a new band. Trophii, a synth-pop duo with a dreamy sound, stood out among the list of musicians who played on this stage. The duo played with a full band but the project normally consists of Richie Smith and Lindsey Pavao, who was a semi-finalist on season two of the TV show The Voice.

While the Music Discovery stage was only a third of the size of the size of its sister stage just a few feet away, it offered performances from a plethora of killer bands. Most notably, The Struts, who gathered a larger crowd than a few of the main stage acts. The glam-inspired band had the crowd clapping to the beat of “Kiss This” and singing along with “Could Have Been Me”— A rock n’ roll anthem about living life to the fullest.

An honorable mention goes out to LA band Weathers for an energetic set despite sound problems and Colorado band 888, for nailing a three-way drum circle.

Kicking off the first performance on the main stage was no easy task with big names like Andrew McMahon in the Wilderness, Panic! At The Disco and Weezer, who just spent the summer touring together. Luckily, The Unlikely Candidates were the right candidates for the job. Frontman Kyle Morris leaped off speakers, jumped off the drum risers and even ended up tangled in his own microphone at one point.

Next, Andrew McMahon reminded the audience that baby grand piano’s aren’t just for love ballads. McMahon treated his piano in the same fashion a punk-rock guitarist treats a guitar. During his set he slammed down on the piano keys with precise fingers and jumped off the top of his piano despite breaking an ankle is the past.

After, Phantogram delivered fan favorites such as “When I’m small,” and “You Don’t Get Me High Anymore.”The New York duo consist of Josh Carter and Sarah Barthell, who are no strangers to festivals. The pair’s synth rhythms and Barthel’s airy vocals had the crowd entranced with their music.

Speaking of festival champions, Weezer played a song line-up worthy of the band’s immense musical catalog. The set list included songs from the band’s 1994 Blue album like “Buddy Holly” and “Undone – The Sweater Song,” as well as newer songs off the band’s newest release the 2016 White Album, such as “California.”

The final was act Panic! At The Disco. From the first song “Don’t Threaten me with a good time,” the frontman was jumping high in the air, making funny faces at fans in the crowd, and pushing the borders of his vocal range with high pitched notes.

But Urie wasn’t all high energy antics. Halfway through the bands set the lights got low and he performed an intimate piano cover of Queen’s “Bohemian Rhapsody.”

Aside from new material the band played classics like “Time To Dance” and “Nine In the Afternoon,” off the band’s first two albums. These songs, much like the small tree saplings festival employee’s passed out at the end of the concert, were the roots to the band’s foundation.