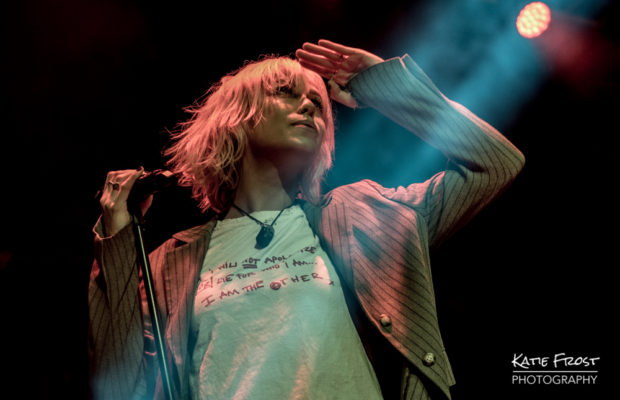 Words and pictures by Katie Frost

I was lucky enough to attend Australian “conscious rock” band Tonight Alive’s first ever London headline show at The Barfly back in 2012, and have been a fan of their music and energetic live shows ever since. Tonight was the eighth date of the band’s UK / EU tour which included both fully-plugged performances and a handful of intimate acoustic performances celebrating the band’s ten year anniversary. Tonight Alive last toured the UK in March of this year when they played the magnificent KOKO in Camden, but tonight’s show at O2 Academy in Islington was a far more intimate affair and tickets sold out way in advance. A huge queue of fans snaked around the venue eager to get inside and enjoy what promised to be a very special show.

First to hit the stage were emo-punk quartet Wolf Culture from Bournemouth who opened their set with two new songs; “Balloons” and “Overboard” before playing the four tracks from their debut EP The Devil’s Plans For Idle Hands which was released earlier this year. This was my first time seeing Wolf Culture and I really loved their sound and all four band-members had smiles on their faces for almost the duration of their set. Faux roses adorned Jake’s drum kit as a nod to the artwork of the band’s EP, which I thought was a nice touch. The band were popular with the crowd and I particularly enjoyed their closing song “Wreck”.

Next up was Jamie Lenman who I saw supporting Marmozets back in October. Jamie and his drummer (both dressed entirely in white) opened with “Hell In A Fast Car” from Jamie’s most recent album Devolver and went on to play a riff-tastic, upbeat set which seemed to go down well with the crowd. Jamie’s set included tracks from his debut album Muscle Memory as well Devolver, and he also snuck in a cheeky cover of “Another One Bites The Dust” by Queen, before closing his set with “Mississippi”.

At around 8:40pm Tonight Alive hit the stage and were greeted by a wall of cheers and screams from the excitable crowd as they launched straight into “The Other” from their latest album Underworld which was released in January. Drummer Matty, bassist Cam, guitarist Jake and vocalist Jenna all looked delighted to be on stage and their happiness really shone through. The second song they played was one of their most well-known older tracks; “What Are You So Scared Of?” From their 2011 debut album of the same name which never fails to get the crowd going. The band played an amazing set featuring a great selection of fan-favourites from their ten-year back-catalogue including “Lonely Girl” and “Don’t Wish” from their most successful album The Other Side (2013), “Waves” from their 2016 album Limitless as well as 2014 single “The Edge” (which featured on The Amazing Spider-Man 2 soundtrack) and their 2017 single “World Away”.

Around half-way through their set, just as they were about to play “For You”, vocalist Jenna told the crowd that last time they played the song in London at KOKO back in March there was an on-stage engagement, which happens to be two of my friends; Kat and Caitlin. Their performance of the song today was going to be just as memorable as they were filming a music video for it. Jenna asked everyone in the room to hold their phones in the air and the whole room lit up and looked beautiful. I can’t wait to see the final video!

The band cranked the energy back up for the rest of their set, which included crowd-favourite “Wasting Away” from their 2010 debut EP All Shapes & Disguises, and ended with one of my favourite tracks from Underworld – “Temple”. Tonight Alive put on a phenomenal show as always, and it was a pleasure to be there to help them celebrate ten years together as a band. The following evening Tonight Alive played a super-intimate acoustic set to just over 400 people at Bush Hall in West London, before heading to Eindhoven to play the final two shows of the tour.

What Are You So Scared Of?