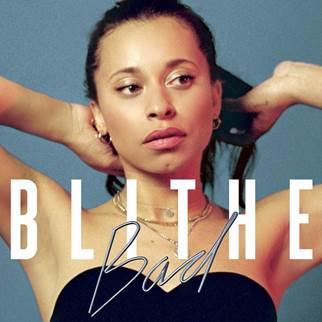 Rising UK one-to-watch Blithe has created pop perfection in the shape of her new single “Bad”.  The track follows the release of her streaming sensation “Masochistic” and Blithe continues to put her own irresistible UK twist on music that’s inspired by global pop influences including Miley Cyrus, Jessie Reyez and Janelle Monae.  The upbeat track showcases the artist’s ability to create pop magic as she lyrically tackles themes of temptation and rule-breaking in what is a certified pop smash.  Speaking on the track, Blithe said: “We had so much fun writing this song.  It’s a celebration of misbehaviour.  We were laughing about how I’m a bad influence and the compulsive need we all have to not do what we are told so we decided to write about it.”
A naturally gifted performer, Blithe Saxon spent her early years performing whenever and wherever she could, armed with a restless energy and unwavering drive to make it.  Despite achieving good grades, Blithe found herself being undermined by teachers, described as a ‘bad influence’ and voted as ‘most likely to end up in the papers’ by her peers.  Brimming with ambition, Blithe moved to London alone at age 16, determined to bring her dreams to live.  She regularly found herself sofa surfing, and sneaking into parties not to meet the right people, but for the free booze and mini burgers in order to keep herself afloat.  Blithe even found herself stripping for 10 days in order to fund her first trip to LA at 19.  Self-aware, sexually confident and independently minded, Blithe is every inch the modern popstar.  With a second EP due for release as well as more live shows in the pipeline, if it’s unapologetic pop that stands for something you’re after, there should only be one name on your lips. You can follow Blithe and stay up-to-date on all upcoming music, artist and tour news via the following links:
Facebook | Instagram | Twitter | Spotify | SoundCloud | YouTube | iTunes/Apple Music | Deezer | Google Play