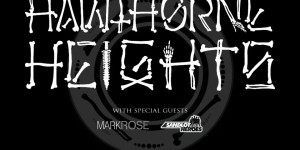 Hawthorne Heights has announced that they will be heading out on a second acoustic tour this April. On the tour, they will be selling limited edition acoustic CD’s. Check out the tour dates and a statement from the band below.

Last February we embarked on our first ever full band, all acoustic tour…just for fun. The idea was to hear our songs in a different way for our own sanity, and to give our die hard fans a different type of show. We only booked it for two weeks, because we had no idea how it would go for us, or our fans. What happened in those two weeks turned out to be more than we could have ever imagined. It was an experience that was so special and powerful that we wanted to stay on the road for once. We actually didn’t want to come home, which is hard to imagine when you tour so often. So this year, we decided we had to do it again. We were even able to find the time to extend it an extra week and take it one step further. Elaborating on the theme “Stripped Down to the Bone”, we have also decided to choose some venues that are very bare bones as well. We wanted to take this tour to some cities that don’t get shows very often, as well as try to convert some smaller places into ALL AGES concert halls, at least just for a night. We also had the idea of trying to get some dates at tiny coffee shops, so we can help turn people on to the local brew of that area. We hope that our fans will respond to this tour again, and realize that we have kept ticket prices very low because we would like to support them as well. Sometimes everyday life can get you down…and a night of music can help you forget about it just for a few hours. Keep the scene positive…help music grow. –Hawthorne Heights