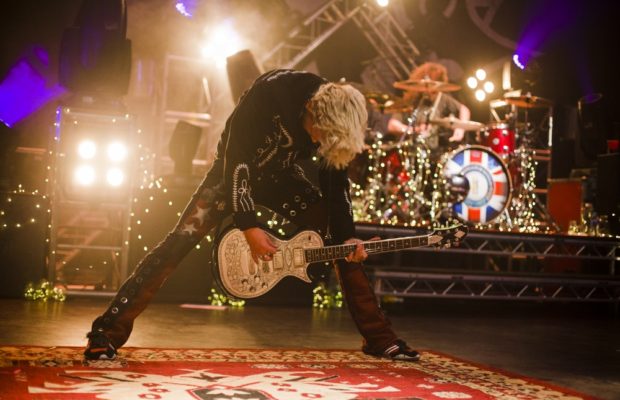 With a tour called ‘Experience Kentucky: An Evening with Black Stone Cherry’ and after chatting to guita­­­­rist Ben Wells and drummer John-Fred Young, my hopes were high for Black Stone Cherry’s London show at the O2 Academy in Shepherd’s Bush.

It’s not often that a band is also its own support, however this is what Black Stone Cherry decided to do for this tour: they started the night with a 45 minutes acoustic set, sitting down, almost at eye level with the fans, sharing thoughts and stories in-between songs with tiny LED lights twinkling behind them.

In an instrumental break during the last song of the acoustic set, lead singer Chris Robertson shared his experience of struggling with mental health issues a few years back, and said how fortunate he feels to have had people to talk to and get help during his darkest moments. There couldn’t have been a better set-up to raise the importance of this issue than this moment, and Chris used the stage to highlight that and encourage anyone who suffers to talk to someone- be it a friend or a doctor- and get help.

This was a dramatic yet inspiring ending to this intimate set, and after a short break the stools disappeared from the venue, the curtains dropped and a much larger, lit stage appeared.

Black Stone Cherry were about to take the stage again, this time with the volume turned up all the way up to 11, distortions on, the whole shebang.

One thing that was clear from the get go was that it was a crowd of singers tonight: apart from chanting with the band during the acoustic set, they all sang along perfectly to Tenacious D’s ‘Tribute’ which was playing in the background in between the sets.

As if an entirely different band has just walked up the stage, fans went crazy to see Black Stone Cherry again. With another, longer, set- the band performed songs from their entire repertoire including a few numbers from their latest album ‘Kentucky’ which they are currently promoting.

It was almost surreal to think that only 40 minutes before everyone were still sitting down, as the place was now on fire and buzzing with energy- the band seemed to have enjoyed the show just as much as their fans (who completely filled the O2 Academy tonight) did.

As promised and as expected, Black Stone Cherry did not disappoint and gave their fans a night to remember.