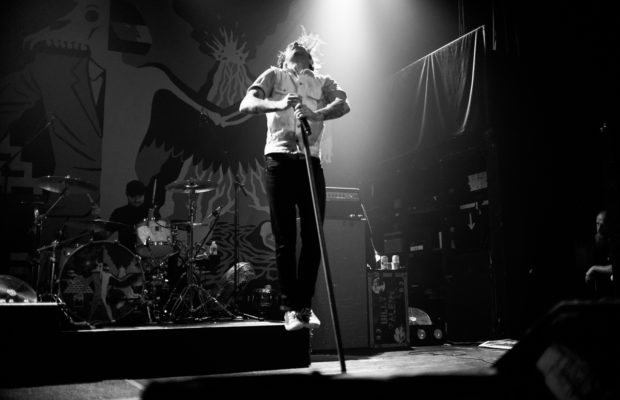 It’s a humid day in September as I make my way  to Gramercy Theatre in the Flatiron District of NYC. I enter a packed venue to the first of two opening acts, Badflower, finishing up their set. Never have I been so upset to miss an opening act. I feel like I’m at a rock show in the 60’s, after only hearing three songs, I’m blown away and all I want is to see more of this band. Next up is The Dirty Nil, a punk rock band from Canada. Their stage presence is brilliant and their music is different from most of what is coming out these days and it’s refreshing to hear. Front-man and singer, Luke Bentham, is amazing to watch perform. While the opening acts were amazing, and definitely compliment headliner, and reason the venue was sold out tonight, Billy Talent, you can tell that people are anxious to have Billy Talent take the stage. Guitarist, Ian D’Sa, bassist, Jon Gallant and fill in drummer, Jordan Hastings take the stage, followed by singer,  Ben Kowalewicz. Before they even acknowledge the crowd they go right into their first song of the night, ‘Devil in a Midnight Mass‘ and the crowd loses their minds. I notice that the front row is filled with people of all ages, some people in the late 30s, some 20 year olds, and then there’s a boy who must be 10 standing right in the middle at the barricade, his dad standing behind him and I can’t tell who’s more excited to be at the show.

The set continues on, Kowalewicz, starts interacting with the crowd more, and apologises for how long it’s been since they played in NYC. The band has crazy energy, Kowalewicz and D’Sa run around the stage, and are clearly pros and commanding the stage and the crowd. The crowd is so pumped up, and the adrenaline rushing through the venue is off the charts. Guys and girls are crowd surfing repeatedly, getting to the front of the crowd, running back into the pit and crowd surfing again. As it is the day before the 15th anniversary of the terrorist attacks on 9/11/01 Kowalewicz addresses the crowd about how far the world has come since then, and how we need to keep moving forward rather than backwards. It’s a really moving speech, and you can tell that he really touched the hearts of everybody in the audience. After this, he notices the young boy in the front of the crowd, and asks security to take him out of the pit and let him and his dad stand side stage for the rest of the set. He then tells the boy, who is in-fact 10 years old, a really dirty joke that he “needs to tell his friends at school” and dedicates the next song, ‘Afraid of Heights‘ to him. The rest of the set is hit after hit, and the crowd are eating it up. They leave the stage for the ever so cliche “encore” chant, even though an encore is guaranteed to happen, and they close their set with ‘Fallen Leaves‘ followed by ‘Viking Death March‘.