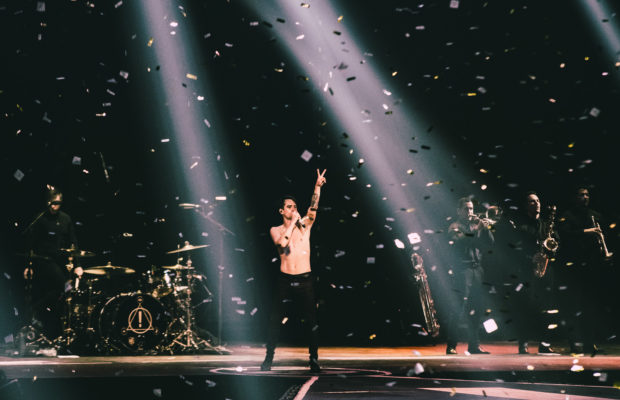 Panic! at the Disco with Hayley Kiyoko and A R I Z O N A

Alt-pop legends, Panic! At The Disco, put on an incredible show this past Saturday night for the fans at a packed out Rogers Arena. For this tour they have rock group, A R I Z O N A (“the band, not the state”), and pop-queen Hayley Kiyoko with them to get the arena amped and ready before they hit the stage. Two very different artists, but two that seem to work perfectly because they both had everyone singing/bopping along!

Playing a whopping 28 songs over the two hour set, including covers of Bohemian Rhapsody and Girls Just Wanna Have Fun, Brendon Urie didn’t appear to falter in energy or enthusiasm once. Even while he jumped between playing guitar, drums, and piano multiple time, showing off his incredible vocal talents throughout. He also took a few moments throughout the show to remind everyone in the room how important it is that they’re here and how much he appreciates the support that has been given to him and the band over the past 14 years.

Panic! At The Disco have put together an amazing production for this tour, including pyrotechnics, confetti, a flying piano, and 12 massive screen behind and above the stage.  It is by far one of the best concerts to have graced Rogers Arena, and Vancouver, in a long while. With about half of the dates for this tour still left to go, it will probably be a little while until Panic! returns to Vancouver, but nonetheless we’re still anticipating what they’ll do next!