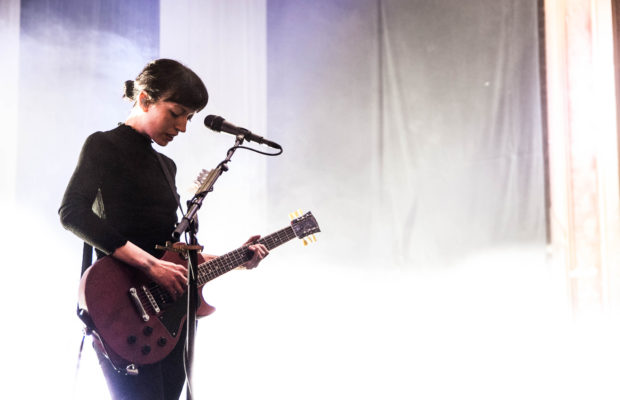 After a long awaited return, Daughter toured through Seattle this past Monday, taking the stage in front of a sold out crowd at the Neptune Theater in the heart of the city’s University District.

With fans packed from the stage to the back of the bar, filling every seat on the balcony level, the energy was calm, but filled with excitement as each member walked onstage under the dim lights.

Opening up with “New Ways”, a track off of their latest album, Not To Disappear, that was released this past January, singer Elena Torna’s vocals rang through the theater so crisp and clear, captivating every single person in the audience.

Unlike many artists in the genre, each member of Daughter brings something different to the table, creating the unique and harmonious mix of sounds that fans fell in love the second they hit play on one of their records.

This became most clear during their performance of “Tomorrow”, a track off of 2013’s If You Leave. With Torna’s soft, yet striking vocals taking the forefront of the song, guitarist Igor Haefeli and drummer Remi Aguilella transcend the sounds being created onstage, injecting Daughter’s unique style and sound into their music, making for an extraordinary performance fans will never forget.

In the sixteen song set list, fans were able to hear songs off of all of Daughter’s albums including “Numbers”, one of the lead singles off of Not To Disappear, “Love”, and “Human”.

The performance of “No Care” was a particular highlight of the night, offering a more up-tempo moment that left fans singing and moving along to the infectious beat.

“Youth”, played towards the end of the night, was a moment fans had been waiting for, singing along with Torna the loudest they had all night. As undoubtedly one of their most popular songs, the smiles on all of the member’s faces onstage at the end of “Youth” showed their appreciation for the crowd in front of them, Haefeli mentioning at one point during their set how Seattle is one of his favorite cities in the country.

Closing the night out with a three song encore of “Candles”, “Medicine”, and “Fossa”, Daughter exited the stage having given a beautiful performance that showcased not only the musical ability of each of the musicians onstage, but the undying love Seattle fans have for Daughter and the music they produce.

While it’s unclear when Daughter will be returning to Seattle next, it’s apparent that when they do, they will again be greeted to a sold out crowd of loyal fans who patiently waited their return.