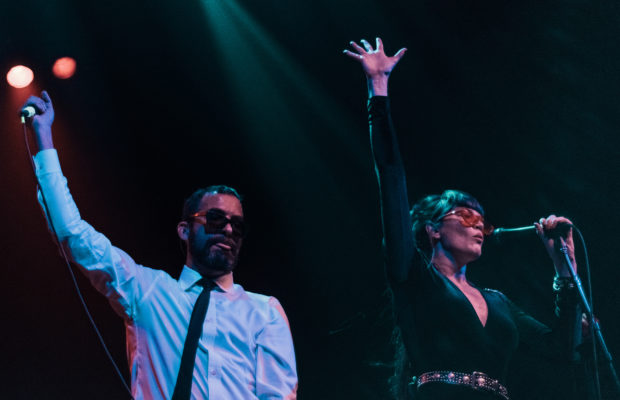 Big Data with Castlecomer and Fitness

Words and Photos by Elizabeth Wiltshire

New York’s Gramercy Theatre was rocking hard last Tuesday evening when electro-alt artist Big Data brought their tour to NYC. Kicking off the night was FITNESS, an alternative trio with big beats and even bigger energy. Singer Max Collins is arguably one of the most energetic performers in the scene right now, leaping across the stage, throwing himself on the floor, and headbanging like there’s no tomorrow. This energy paired with the sheer talent of the band got the night off to a great start and certainly got the crowd dancing, especially during songs “Kill The Rich” and “Itch.”

After FITNESS was Australian group Castlecomer. To say that they blew the crowd away is an understatement. Frontman Bede connected with the audience early on by making jokes and raving about how great PBR beer is. Thanks to this, he got nearly every person in the room doing the synchronized side-step that the band did during the chorus of the song “Move.” Their sound is similar to that of Vinyl Theatre and Middle Kids, appealing to those who love upbeat indie/alt songs that are easy to dance to. It’s safe to say that they gained loads of new fans in New York City after their set.

After the two incredible openers, Big Data took the stage. Although their entire performance was impressive, the first thing that captured my eyes was the production. The screen behind the drummer was ever-changing with graphics corresponding to the music, and the same can be said about the lighting in general. The constant motion of the graphics reflects the constant motion of singer Alan Wilkis, who was running from side to side on the stage, dancing, and leaning into the crowd. So much motion was a lot to take in, but it made the experience all the more fun. Unsurprisingly, Big Data’s set blew the audience away. It’s certainly not a performance to miss out on.

Try to catch Big Data’s stop in your city! Dates and tickets can be found at https://www.bigdata.fm