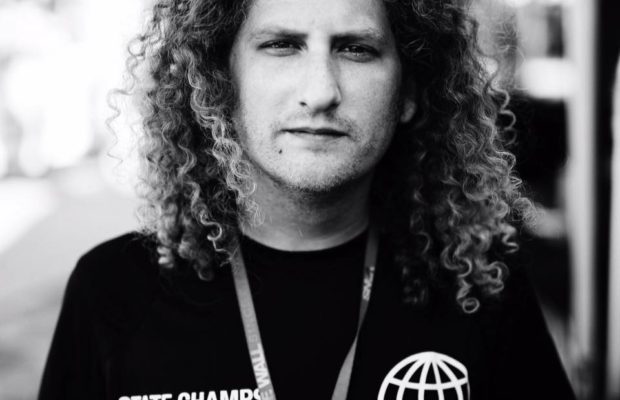 As the first of our two part interview, we recently caught up with photographer Mike Wilson who has spent the past few years on the road with Mayday Parade. Getting his start in the local Florida scene before eventually working with Mayday Parade as their content creator, Mike gave us the inside scoop on how his career began, advice on what to do and not to do if you ever find yourself in handcuffs at a Weezer gig, and why the rapidly growing music photography scene is something worth embracing.

I first started showing an interest shortly after high school. A friend of mine had a few film cameras that he barely used and offered me one. I had never owned anything other than a point and shoot or disposable camera at the time. From there, I started taking photography classes and working for my school newspaper.

A snowy day with The Maine on the American Lines tour

I shoot with a 5d MKiii and my three main lenses I use throughout the day are the 70-200 f2.8, 24-105 f4 and the 85 f1.8. For lighting, I use the Canon 580ex flash. I’ll bring my light stands, monopod and tripod with me along with a video slider. My trusty Pelican 1510 is a must have for delicate or larger pieces of equipment and it keeps everything safe during travels while my most valuable equipment is in my Manfrotto camera backpack.

Your portfolio features not only a lot of live music photographs, but also sports, portraits, and wedding photographs. Is there anything a style of photography you prefer to shoot more? Why?

I prefer music photography over any other avenue of photo. There is something powerful about capturing behind the scenes images of artists that fans get to see and interact with.

You have photographed a number of bands over the years, is there a band/artist that you particularly enjoy photographing the most/ have some of your favorite images of? If so, who and why?

I am originally from Tampa, and every year around Halloween the band Gwar would tour through. I was working for a magazine called Creative Loafing and had the chance to shoot them for the first time. I was warned in advance about how their shows go. For those of you who are unfamiliar with Gwar,….they dress up in crazy costumes and cut off fake limbs on stage, kill fake celebrities, and most importantly, spray the crowd with fake blood. I made sure my camera was wrapped and safe for the show since I would be right in the warzone in the photopit. I learned very quick that night that they love spraying the photopit. I came home red from head to toe and I have shot them three more times since then. Insane.

Of Montreal is another favorite of mine to shoot, but that will be for another time….

I was covering a music festival in northern Florida called Deluna Fest and it was the first night of the “On The Beach” festival. Weezer was one of the main headliners for night one and I anxiously made my way to the photo pit, little did I know I would be walking away from that stage in handcuffs, and kicked out of the festival….

It all started when the singer of Weezer jumped off stage, cleared the photo pit gate, ran through the crowd and up to the top of a sand dune. Some of the crowd follows and are running with him on these dunes and I jumped in the action and followed. We made it all the way to the soundboard and had to part ways, for security had finally gotten to everyone. So after snapping the shot shown (the W is the stage) I began walking back over the dune to get to the photo pit for it had only been one song before Rivers took off into the crowd and a police officer was standing at the top of the sand dune directing people away. Of course, my dumb ass doesn’t think anything of it and flashes my photo pass trying to signal. I’m on my way to the photo pit and he keeps signaling for me to go another way but like I said, my dumbass showed him the photo pass AGAIN and within seconds, the cop had me in handcuffs and was escorting me to the bottom of the dune. This is when I learn that it is a federal offense to be on those dunes. Fantastic. The cop was super cool about it and just wanted to talk to me about it. He eventually took the cuffs off, but it was his superior that was extreme and came running up to us yelling, “KICK HIM OUT, CUT HIS WRISTBAND.” Next thing I know, the cop that originally cuffed me was now cutting my access wristband while apologizing to me. Lucky for me though, the head of media for the festival witnessed the whole thing and followed me out of the festival and gave me a new wristband. This all happened while one of my closest friends was in the crowd watching Weezer with zero idea that I had just been kicked out. SO, kids, never go on sand dunes in Florida.

As a photographer who is very familiar with touring, what are the do’s and don’ts photographers looking to begin touring should be aware of?

DO be respectful of other photographers in the pit. This can be hard sometimes when a pit is jammed to capacity. I have definitely had my oops moments like staying in one “golden” spot for too long in a crowded photo pit, or getting in people’s way. It is bound to happen, but try to be courteous of everyone around you, BUT STILL GET THE SHOT OKAY?

DON’T be afraid to introduce yourself to other photographers. We aren’t enemies, we aren’t after each other’s job (though some photographers may act that way). DO drink plenty of water. Especially if you are working Warped Tour. I learned this the hard way and this past summer, soda and iced tea caught up to me and I had a kidney stone while in New Orleans at Warped. What a day that was….made it back from the ER to shoot the band ?

Kellin Quinn of Sleeping With Sirens on Warped Tour

I have noticed the incline and welcome it openly! The more creatives that are emerging, the greater the content the world has to see. Even if there is someone with an Instagram account using their iPhone, they are still providing unique content for the world to see and share. I’m totally into it. Now as for separating myself from it, I try to do my own thing honestly. I feel my editing is a bit different from everyone else who are all about certain presets or color tones. Now, not saying I haven’t used any of those because absolutely I have, but I edit each photo individually to make the end product what I envisioned before the photo was even taken. You won’t go to my site or IG and see a consistent color tone or consistent anything for that matter, honestly.

As a photographer who is very active on his social media accounts, what importance do you feel social media websites such as Twitter, Facebook and Instagram hold in your career and the career of photographers around the world?

Social media is extremely important for photographers, their careers, and even our clients. I’m not much a Twitter guy, but I do work the bands. Social media provides an immense platform for artists like myself to display the work created and to share images of things not many people get to experience from their small town. Being able to follow fellow photographers is one of my favorite parts of social media. Not only do I get to watch them grow as photographers, but I get to view a whole new world of inspiration by just searching these social platforms.

One of my favorite photographers is Josiah Van Dien who is out with Shawn Mendez. I first started following him when he was working for a band called We The Kings and I was able to become friends with him one summer on Warped when I first started working for Mayday Parade. Not only is he an incredible photographer, but an even more incredible human. I get inspired by other photographers jumping genres and music styles, like Josiah. Being able to see how an artist brings out the best of photographers is exciting and rewarding for both parties involved.

John of The Maine

Keep pushing your comfort levels, you never know what can come of it. Study other photographers, notice the things that set them apart from other photographers. If you are trying to get into music photography, start out by going to your local venues and trying to shoot the local bands. It never hurts to introduce yourself to these people along with giving them a card with your info on it. You never know who you’ll meet.

Focus on quality not quantity for portfolios. I remember hearing in college that a good portfolio can be shown with no more than 10 images. I think that is absolutely absurd, but it’s true. An artist can show their talent in hundreds of works, but someone looking to hire you does not want to see hundreds. Websites are a different story of course, load that bitch up!

Keep your eyes peeled for the second part of our interview with Mike in our brand new issue out next month!

Photo of Mike by Lupe Bustos