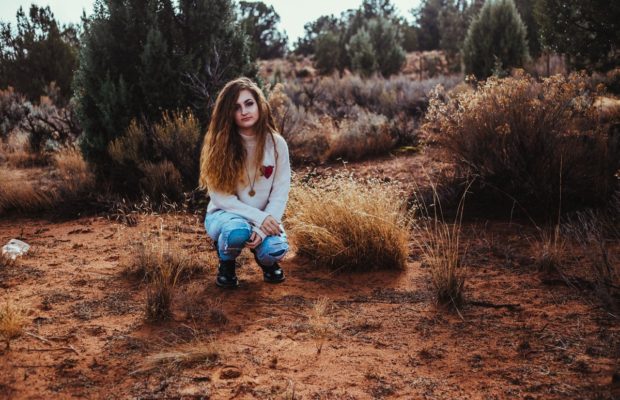 Based in Indiana, Nina Tadic is a staff writer and photographer that’s changing the game with her passionate writing style and ability to capture colorful, energy-packed concert photos. Since joining Stitched Sound back in January of 2016, Nina has capture beautiful images of bands such as The 1975, Every Time I Die, Joyce Manor, and We Came As Romans. With her heart in the hardcore and alternative rock music scenes, her impeccable work over the past year and her bright personality is why she is our March Staff Member of the Month!

When did you first join Stitched Sound?

I joined SS in January of 2016. So it’s been a little over a year now, which is crazy to me. Time flies.

When did you start getting into photography and journalism?

I have been involved in journalism since I was a kid. I was always on my school newspaper staff from third grade through the end of high school. In high school I wrote feature and editorial and was my school paper’s Graphic Editor. As far as photography goes, I think I always had an interest in it, but I didn’t really pick up a DSLR until my junior year of high school. January of 2015 I saved up the money for a Canon 50mm f/1.8 and started shooting shows with my dad’s old Canon Rebel XTi.

You are currently attending Valparaiso University with a major in Computer Science, what made you decide to not go the journalism/photo major route?

I actually chose Computer Science for a couple of reasons. From a logical standpoint, it’s a field of work that is constantly expanding, and is fairly mobile. That means that I don’t have to worry about job security after school, and I’ll still be able to shoot shows and pursue journalism on my own time, and hopefully even tour. I’m considering picking up a second major in PR at the moment as well, because I think it would make me more versatile in the industry as a photographer/journalist/etc. I steered clear of a photo major only because I know I’m pretty bullheaded, and I don’t like having to relearn different ways to do things. Like in art classes, when teachers tell you that to draw forms you need to start with basic shapes – I always hated that. If I can draw a face without drawing and erasing twenty times, let me. I feel the same way about photo. I’d rather learn on my own and from colleagues, just because it works better for me.

What has your favorite show to photograph over the years and what made it so memorable?

My favorite show that I’ve shot over the years was The Amity Affliction’s Chicago date on their This Could Be Heartbreak Tour. I think what made it memorable was that it was one of the most chaotic and also most exciting shows I’ve ever had the opportunity to shoot. TAA is my favorite band, so I was really giddy about seeing them to begin with. I bought myself VIP the day the tour was announced, so I got to meet the guys and take pics and fangirl a little bit before the show even started.

I didn’t actually find out I was going to be able to shoot the show until about an hour before, and I got lucky, because myself and one of my best friends, Rosario Gutierrez, were the only ones shooting aside from the touring photographer, so it was a cool friend experience. The lineup was incredible, each band got the crowd going, and the energy the entire night was so exuberant from everybody. I had never seen any of the openers before, aside from Being As An Ocean, so I wasn’t sure what to expect. Each of them definitely brought their own element to the show, and the crowd’s energy reflected that. I was disgustingly excited throughout the entire night, so by the time The Amity Affliction went on, I was just itching to shoot them. I didn’t expect what was going to happen, though.

About halfway through the second song, I ended up cutting my leg open on a nail sticking out of the stage (yikes, right). I didn’t figure it was more than a scratch, but when it was still burning a minute later, I looked down and realized my leg was just a disaster. (I’ve never been the most coordinated, so this is just a typical Nina thing.) But I debated with myself for a second about whether to stop shooting and go clean up, or just keep going. So I finished shooting the second and third song, sprinted to the bathroom to clean it up, then went right back to the crowd without missing a beat. And I have the scar to prove it. I think that’s definitely the most adventurous show I’ve shot, and that’s probably why it’s my favorite.

Is there are particular photo in your portfolio you are especially proud of? Which is it and why is it one of your favorites?

As most artists are, I’m way too critical of my own work. Somehow, though, I still have two shots that I am crazy proud of. The first one is a shot I got of Sorority Noise last March at Double Door in Chicago. The band got so into the song they were playing, and so did the crowd. I was shooting from in the crowd and getting knocked around a little bit, so getting good shots was definitely a complicated task. This shot in particular is also one of my favorites because I feel like it really captured the essence of the band’s performance. I also loved the band’s lighting, and therefore have processed and re-processed this same shot a good four or five times in different styles. I finally got it to a coloring and style that I like and I feel like really suits Sorority Noise. That’s something I do a lot as a photographer. I like to process the photos uniquely based on who they’re of, because certain musicians feel like they have a visual style that suits them, you know? Like for Sorority Noise, I feel like they give off a very film-oriented, but still vibrant style in their sound, so I felt like this photo really captured that between its colors and movements and so on.

My other favorite is from that same Amity show I spoke about above. After I was finished “officially” shooting, I put on my 50mm and my friend Rosario let me goof around with the prism she had just bought. So I was just messing around seeing what I could do with it, and I somehow got this shot of Joel Birch, the Amity Affliction’s frontman. At the same second I hit the shutter, the light struck my prism at the perfect angle, and the result is that it almost looks like lightning going horizontally across the photo, along with Joel’s reflection on the righthand side. I just love the way it turned out. It was just a shot I got completely on accident without any intention of making perfect, and in my opinion, it’s one of the coolest photos I’ve ever wound up with.

Have you become a fan of any band(s) after reviewing/photographing them? Who and why?

Definitely! As far as bands I’ve shot, I think I’ve become a much bigger fan of Vanna, Old Wounds, and The 1975. For Vanna and Old Wounds, it’s definitely because the emotion and energy they bring live is just as vibrant as their recordings are. For The 1975, I think they gained a lot of my respect as artists when I realized they put just as much effort into the visual aspect of their performances as the musical aspect. As artists, they do a great job of being aesthetically pleasing and bringing their own sound to the table. I love that.

As far as bands I’ve reviewed, I’ve gotten a lot more interested in Every Time I Die and Trophy Eyes – both of their most recent releases ended up being in my top ten of 2016! I’d listened to both before, but I think that when you review an album you focus more on the band’s intent and what they’re trying to convey from all aspects. Therefore, I think I get a lot more out of musicians’ work when writing reviews, because I have to put a certain amount of effort into listening to the albums. I love it, because it feels a lot more insightful than when you just hear them on the radio or in passing.

Who is your dream artist to interview and why? What would be some questions you would like to ask them?

Oh lord. There are so many artists that I would absolutely love to interview. I think if I had to pick, I’d want to sit down and interview Kathleen Hanna (of Bikini Kill, Le Tigre, The Julie Ruin, etc). Kathleen Hanna is really someone who I feel really helped pave the way for women in punk music and art. I admire that so much, because I’ve always been interested in the history of feminism, music history, and the DIY punk subculture as a whole. I feel like Kathleen Hanna embodies all of those things so well. There are so many questions I’d love to ask her. A few of them would probably be:

What are your top five favorite albums?

If you could only listen to one artist forever, who would it be and why?

I mean, if we’re being honest and realistic, it would probably be The Maine. They have so much music out (five full lengths with another on the way, and few EPs, too) that if I limited myself to a few songs a day, I could go without repeats for a decent amount of time. I’m also a little biased because they’re one of my top three favorite bands, so I already listen to them almost every day. John O’Callaghan is one of my favorite lyricists, because he can take such simple phrases and wordings and make them feel profound. The band as a whole is so dynamic when composing music, and I just feel like they have a song for every mood. Their (emotionally) heavier work is still so gentle and sweet, and their cheerier songs make you feel like dancing and singing and throwing a party. I feel like they’re just the band that has got me covered no matter how I’m feeling.