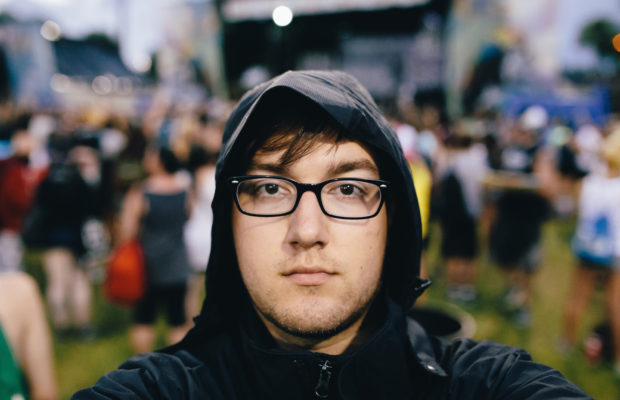 Right before heading out on the Vans Warped Tour for his second year with Rise Records, Larry Wentworth opened up about how he got his start in music photography and shared why it is important for photographers to never put down their cameras.

When did you start showing an interest in photography?
When I was about 18, I got an iPhone and started downloading photo apps and just playing with them and eventually went and bought a DSLR.

Have you taken any photography classes or were you self taught?
I’m self taught. I just picked up a camera, played around with it, and read up on it online. I did take two photo seminars with Jeremy Saffer though. I learned the business end of music photography and got to see how a photo shoot with a band went – learned posing, lighting, everything, it was super useful and I still use my notes from it to this day. I enrolled in college as a photo major originally, but wasn’t learning anything I hadn’t taught myself already. There was a lot of fine art film projects which was cool, but nothing I could see myself using in a day to day photo career, so now I’m a marketing and public relations major and I’m loving it.

What gear do you typically shoot with?
I’m currently shooting everything on my Canon 6D. I use a Canon 24mm-105mm f/4L lens usually for full band portraits, everything else I use a 35mm f/1.4 Sigma Art Series lens, and occasionally my Canon 50mm f/1.4.

A lot of young photographers have a mind set of “more expensive equipment, better photos”, do you agree with this idea?
To a point, I do. I’ve seen people with amazing equipment take awful photos and people with entry level gear take amazing photos. I used a Canon Rebel XS for a few years before upgrading, and at that point, I was looking for better quality images and more on camera options, and mainly just a full frame camera. It all has to do with your skill level and what you’re looking to get out of your work.

The first show I ever photographed was Four Year Strong, Bad Religion, and Rise Against. I spammed Four Year Strong’s manager at the time with emails about wanting to shoot the show, which was a total newbie mistake. For whatever reason though, he gave me a photo pass and then I shot the entire thing in auto mode.

It absolutely does. I’m always open to photographing any artist, but I tend to photograph bands that I listen to. Metal and hardcore is what I gravitate to, the music means alot to me and the bands I listen to always have something important to say about politics, the environment, or just life itself. The music is emotional and so is the performance, the band up there is screaming and yelling for a reason it’s not just noise, and the photos you can take away from their performance can be equally emotional.

How would you describe your shooting style?
Close. I focus on the band members individually when shooting live, if I can get a good shot with several then that’s cool, but I like to keep the focus on one person at a time, I feel it’s more intimate that way. There’s usually a barrier between the band and the crowd so if I can take photos that make people feel like they’re right there, then I’m doing my job correctly. Of course, many band members just jump the barrier at shows and go into the crowd and I do the same, getting crowd interaction up close is better than getting that sick jump shot of the guitarist I think. It better tells the story between artists and fans.

Out of your portfolio, what photograph are you the most proud of and why?
Definitely the photo of Oli from Bring Me The Horizon in my portfolio. That was the first time I photographed Warped Tour and that’s the first photo of mine that was ever published, it ended up in Alt Press. It made me feel like I could really do something with photography.

I don’t really think about separating myself, I just shoot and edit in a way that I think looks good and I change it up slightly all the time. I haven’t had anyone tell me my work looks like someone else’s so I don’t think about it too much.

What is the best advice you could give to young aspiring photographers?
Don’t stop shooting, I almost stopped a few times, and make as many friends in the music world as you can. I got my first touring gig from the recommendation of a friend and I’m extremely grateful for that.

Check out the first part of our interview with Larry where he talks all about his summer on Warped Tour here.