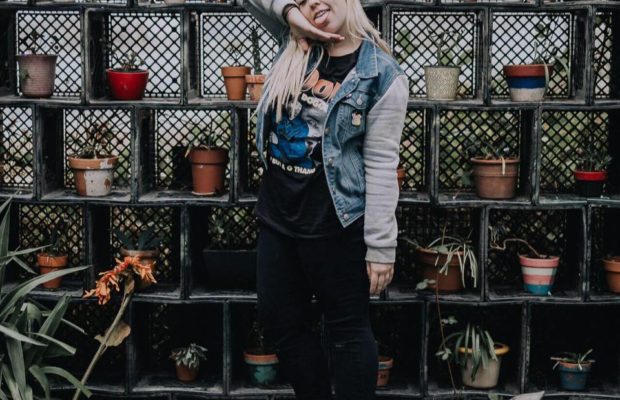 With a portfolio filled with dreamy edits and energy-packed images of your favorites bands, Eden Kittiver is taking live music photography to a whole new level. Working in the past with bands such as Superheaven, Echoes, and Life Moves On, Eden manages to capture those moments during a show a lot of us often miss with her unique style. Opening up to editor Rachael Dowd about some of her favorite bands to photograph and the moments she is most proud of, Eden gave us an inside look on how she works and creates those images we can’t seem to get enough of.

When did you first start showing an interest in photography?
Once when I was really little, I set up all my Barbie dolls with props and took photos of them, different poses, clothing changes, the whole shebang. Ended up using an entire roll of film on my mom’s camera in the process. So, I guess you could say I’ve always had a passion for it! Then, when I was 16 I got my first DSLR camera and started shooting shows shortly after!

ONE OK ROCK
What was the first show you ever photographed and looking back, is there anything you would have wanted to change or wish you had done?
After sneaking my camera into venues and shooting from the crowd for awhile, the first show I ever shot was for my friends in a local band, but don’t usually count that as my first show. The first show I ever shot with a photo pass was Motion City Soundrack and Bayside in October of 2013 and looking back, those photos make me cringe! I would’ve changed so much, but most importantly, I wish I shot in RAW instead of JPEG. I also used manual focus for the whole thing and that’s tricky when they band keeps moving and lights keep changing, so most of the photos are slightly out of focus!

Balance and Composure
Throughout the years, who has been your favorite act to photograph and why?
Honestly, I think Turnstile is my all time favorite band to shoot. The vocalist, Brendan, always does something crazy, like belly flops into the crowd or jump off someone’s back, you’re always on your toes waiting for him to do something insane! Plus, the crowd is always super pumped and going nuts so I capture a lot of cool crowd surfer shots too!

Turnstile
If we were to open up your camera bag right now, what gear and equipment would we find?
Right now, I’m shooting with a Canon Rebel T3i! My go to lenses are my Tokina 11-16mm f/2.8 and my Sigma 18-35mm f/1.4 ART. I’ll also bring my external flash unit, some filters and prisms, and a bunch of extra memory cards!

The Hunna
How would you describe your shooting style?
Oh man, I don’t know! Haha, I’m always changing my style a bit and always looking for a way to make my photos look different than everyone else’s. I usually try to get some really good shots of the band and the crowd in one, then mess around with it in post processing!

Pears
Your work has been featured on a number of merchandise and album covers over the years including Superheaven, Echoes, and Life Moves On. Is there a particular project you’ve been involved with that you are especially proud of?
The Superheaven shirt was super cool! It’s crazy to think people are wearing a shirt with my photo on it. I think I’m most proud of the work I’ve been doing with a DIY punk magazine called Razorcake! It was something I had been working towards for awhile so having my photos featured in their magazine and on the website is a huge accomplishment for me!

Noise Complaint
Out of your portfolio, if you had to pick one photograph as being your favorite, which would it be and what is the story behind it?
Honestly, my favorite photo changes so often! I look back at some photos that used to be my favorite that I now hate! Right now, I’d have to say my favorite photo is of Foxing at The Regent in Los Angeles, CA. I was super nervous about that show because I got there late and there was no barrier so I had to shoot from the crowd. Usually, I prefer shows without a barrier but at this one, the stage was super high and I was stuck behind a guy about a foot taller than me! I got this shot and spent so long editing to get it just right!

Foxing
In your opinion, what elements make for a good live shot or portrait?
I always prefer to skip the shots everyone else is going to get and think outside the box. I like to figure out a way to get the band and the crowd in one shot, and I like to really play with the lighting in the room and see how it can help me, or how I could work around it where it’s messing me up!

Moose Blood
As an artist who is pretty active on her social media accounts, do you feel as though social media platforms have helped your career in any way? If so, how?
I think it’s incredibly important for photographers to post about their work and share it as much as possible! The key to making it as a photographer is networking and now, we’re so blessed to have such a wide database of people to connect with online. A lot of the opportunities I’ve had were from someone finding my work on social media and contacting me about it!

Dead To Me
As 2017 continues on, are there any bands you are hoping to photograph this year that you haven’t photographed before?
This year, I really hope to do some work with Cloud Nothings, Pinegrove and Caskitt. Shooting Title Fight would be a dream, I always miss them when they’ve come through in the past. I also really want to shoot Lemuria in LA at the end of this month.

Direct Hit
Is there any advice you could give to aspiring photographers out there who are looking to start building their portfolios?
Don’t take yourself too seriously and don’t get discouraged! It took me over a year to get a photo that made me say “damn, this is great” and I’ve been improving every show since then! College courses and photography books are helpful, but the only way you’ll REALLY get the hang of it is to just keep shooting!

Photo of Eden by Kayla Surico