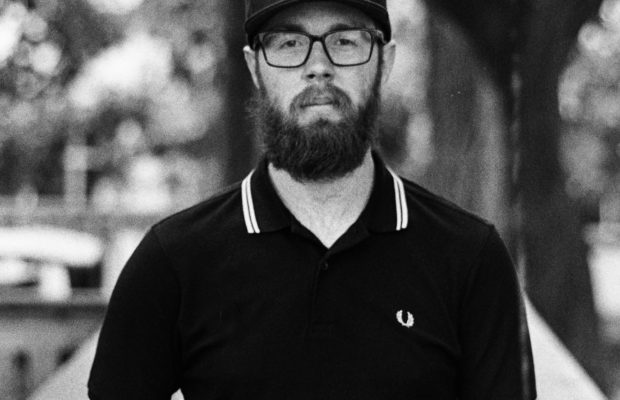 Based in Dallas, Texas, Casey Lee’s photography career began in 2006 and since, he has photographed a number of musicians including Anthony Green, Every Time I Die, Frank Carter, and more. From film to digital, Casey’s ability to break out of his comfort zone and try out different things has allowed him to build up a distinct style that is unlike other photographers out there. Talking with us about his shooting style and some of his most memorable photographs from over the years, Casey’s live photographs and portraits offer a refreshing take on the world of live music.

I picked photography up as a senior in high school after diving into camera set up and rigging inside of Maya, a 3D animation program. I really enjoyed being able to create a scene and change how it was rendered by tweaking focal lengths, apertures, movements. That wound up leading me to ask my parents for my first DSLR, a Canon Rebel (the first digital rebel) for Christmas after I had tracked one down on eBay for a solid deal.

Photojournalistic, patient, clean would be the first three words that come to mind.

Self taught. I took an intro to photo class in college for shits and gigs (and the 3 hours of art credit I needed to graduate). I mostly spent time going over exposure calculations, some critiques, and some art history. But it was rad, the professor was a friend of Ansel Adams, so we got a lot of dope stories about Adams creating photos.

But, I learned more from my photo history class. Being exposed to so many different artists, technologies, approaches to photography. That class and the research and writing I did for it, impacted my work more than the other photo class. A lot of what we covered there I could teach myself, but exposing myself to early photographers’ works was something that would have just been super difficult without the course.

First show ever was probably Oh, Sleeper at a Third String (the crew behind So What?!) show at this venue called The Plano Centre. It was a suburban convention center where there would be shows about once a month. If I could change anything, I would have shot more and been worried less about the crowd. I got some cool photos that led to me working with a few locals and really helped build my portfolio at the time, but I really had no idea what I was doing, what happened when I used a flash in a room I was already achieving a pretty decent exposure in, etc.

My first photo pit show was Set Your Goals at the House of Blues. I think I was a freshman in college and I had tracked down their contact info through MySpace. Again, change anything, I might back off on the exposure and adjust a lot of composition and be more patient for the shot. Probably would have also shot wide from the crowd after the first 3 songs.

Gear plays a roll, certainly. I’m not going to put a nifty fifty in my bag and dump my L glass. But, I have made some of my favorite photos on cameras that are 20-60 years old, with manual focus glass, or antiquated film SLRs and a mid range 50. The gear helps, but if you don’t know what you’re looking for and what you want to achieve with the photo, no mountain of gear and money can help you. And sometimes, using that gear that is targeted as more entry level can really force you to really work towards creating good images, anticipating moments, and not relying on the best AF tracking money can buy, or the fastest drive modes.

Wow, one photograph. That is difficult, to say the least. If I absolutely have to pick just one, it’s probably the attached frame of Frank Carter from (at the time) Gallows.

I’ve told this story a couple of times, but that year at Warped, I think it may have been my first time to shoot, and while I was out, my 30D just totally took a shit. I found out a couple of days later that the shutter had just totally failed. Thankfully, I had taken out my new-to-me EOS-1N, a 35mm film body that I could use my EF lenses on, and I was planning on supplementing my digital shooting with a few rolls of film. Well, once the shutter failed, the 1N moved to be my primary (and only) camera body for the rest of the day (a day that included photographing Alexisonfire, Thrice, VersaEmerge, Gallows, and UnderOath) with only 4 or 5 rolls of film to use. I had to totally change my technique for the day and that’s when I really started to grasp the idea of anticipating a photograph and really being patient and grabbing one image, and not just rolling the shutter and hoping to get a good frame.

Especially these past few years, the amount of photographers in the music industry has increased. Do you try and separate yourself from the group to stand out or is it something you don’t think about?

I guess I do a bit, I think we all do. Whether or not we’re cognizant of those decisions is another matter. But yeah, I do, I think at first for me, it wasn’t a conscious effort to differentiate myself, but now I’ve realized that a lot of me shooting film is/was in an effort to differentiate myself and explore new media. That search for what makes your vision and work different is important, if I had found this out super early on, I doubt I would appreciate it as much or feel nearly as passionate about it. And I’m happy to share the knowledge, the more people shooting film, the more likely film production continues and I don’t have to worry about my favorite film stock disappearing from my local camera shop’s shelves.

Focus on the moment. Anticipate it. Do your best to capture that moment. Who gives a shit if you get it technically perfect if there is nothing exciting about the image? It is 100% about the moment. Those other photographs are great practice and help you hone the craft and in that respect are super useful, but learning to anticipate, capture, and find those moments when you’re culling after the fact is so damn important. It takes time, but can make a good photographer a great photographer.