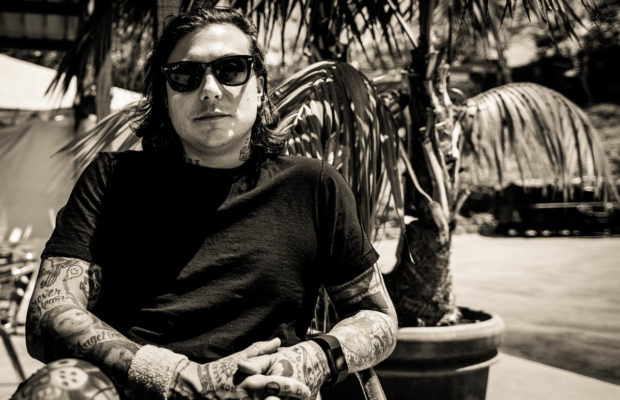 Frank Iero has been playing in bands since the age of 11. You could say he was born with it in his blood as both his father and grandfather were drummers. Even though the elder Iero’s wished for anything but Frank to follow in their footsteps, the path had been laid. Iero would occasionally go out with his father as he went on tours growing up and you could say he fatally caught the bug. “Yeah, but you know that’s just the thing, how are you not going to do that when you’re watching this as you’re growing up? It’s the coolest. It’s like you’re a part of this secret society that stays out all night and has breakfast at 3 in the morning.”

Even with music always first and foremost in his mind, there was a backup plan. “I was going to make monster movies, but I had no idea how to do that,” laughs Iero. “I would still like to do that. I think that would be really fun, but I get to do that in videos.” With a Halloween birthday, you could say it might be a predestined interest, but in the end blood won out.

Frank “Cheech” Iero, Sr. is not without his own musical success. Considered one of the best drummers on the East Coast, he has worked with the likes of John Lennon, Johnny Cash, The Blues Brothers and Iggy Pop. He taught Julian Lennon how to play drums and was one of the last people to see John Lennon alive as they were in the same recording studio minutes before Lennon was killed outside his home. Some would say Cheech’s big break could have been when he was offered to tour with Kiss in the early 80s, but life had other plans for him as Frank Iero, Jr. had just made his appearance. Making the tough decision, Cheech decided to dedicate his time at home with his new family instead of chasing the rockstar life. Although not in the spotlight, music stayed in the senior Iero’s career and he passed the love on to his junior. Teaching Frank drums from an early age, he didn’t quite take to it as Cheech and his grandfather had and instead ended up switching to the guitar. While playing in bands while growing up, Frank dropped out of Rutgers University in his senior year on an academic scholarship to tour with his band, My Chemical Romance. We all know how that went. Father and son got the opportunity to play together as Cheech played some beats on MCR’s album titled hit song “The Black Parade”  and on “Teenagers” citing this as a highlight to his career, to work with his son.

Four years outside of MCR, Frank continues to find open doors.  “For me, I have a hard time saying no to something that just sounds fun or inspires me somehow. Whether I have the time to do it or not, I’ll always say yes and I’ll have to figure it out… I feel like not taking that risk or not saying yes is creative death. There is a reason why the universe opens itself up to you for this, you know. And sometimes…  what’s so powerful is, if you’re in one project and you’re doing something and you hit a wall, if you’re an open conduit, you’ll hear this knock and turn your head and all of a sudden there is another opportunity and that opens up the door that was locked before. I really rarely hit a creative block. I just keep kind of deviating…”

Parachutes was released late October 2016, although it was a solo project it became more of a collaboration due to circumstances. While touring as frnkiero andthe cellabration supporting the Stomachaches album, drummer Matt Olsson and guitarist Evan Nestor, also Iero’s brother-in-law, were already on tour. “When I had songs for Parachutes, I could just come in and say ‘OK, this is the song lets play it’ and then I could hear it back immediately. I didn’t have to put it in a drum machine and put down a bass line and then put down the guitars and then figure out if it worked.”

October 13, 2016. Frank and fellow bandmates Matt Olsson, Evan Nestor and manager Paul Clegg were unloading a van in front of The Metro in Sydney, Australia when a city bus rear-ended the van trapping the members between the bus and van. Iero went under the bus bumper and was dragged 10 feet between the bus and curb and miraculously survived due to a huge rucksack getting wedged between him and the bumper. Nestor and Clegg suffered serious injuries and from eyewitness accounts, none should have survived. Speaking of the day Iero said, “It is unfathomable the way that you can think you have things figured out and then be kind of smacked upside the head and everything is turned 180 on you. It’s… yeah… unbelievable.”

On the heels of the accident, Iero released Parachutes. “ I think I put this album out a little bit sooner than I should have because I thought that it would help with the healing process of things. And also, you know, it would feel like a triumph to be able to get out and play the songs that we thought we’d never get to play again. Also, too, this record is one of those things where after that day, after the 13th, it felt like I had written this record for myself to listen to after that accident happened. It’s kinda strange. Things meant so much more and in different ways when listening back to that record.”

Although saying that he didn’t think he’d be ready to put this current album to bed until maybe the one year anniversary of the accident, he is working on new material. “There is something there. I don’t know what it is yet.”

The New Jersey native has a handful of dates scheduled until the end of the year, but look for additional shows to pop up. You’ll want to see this group of talent live. Stomachaches and Parachutes are now available for your listening pleasure.

Photos and Interview by Jessica Jones