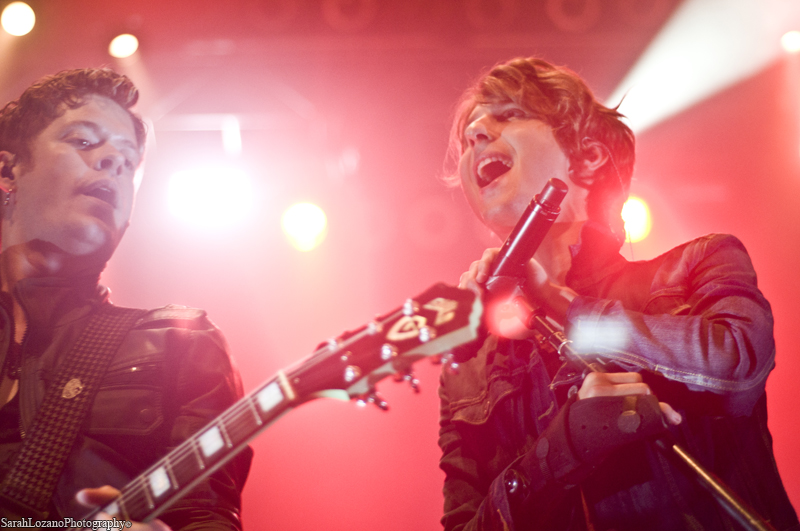 The last night of Hot Chelle Rae’s Beautiful Freaks tour was a fun event. The last day of tour took place in Houston, Texas at the House of Blues. The show started at eight o’clock and didn’t finish until 11. The show was four hours of pure fun.
The opening band was Austin based Electric Touch. The band, being from close by seemed to have a good mixture of adoring fans that sang along to their wonderful words. The straight music play performance style had people dancing and moving, which is what concerts are all about.
Next up was upcoming pop singer Cady Groves. Cady Groves, whom originally started off as an acoustic artist, has really grown from her days of playing small beat up venues and has seems to make good use of the stage. With her fun lyrics and stage banters Cady has a beautiful conversation with the crowd. Telling stories in between her songs about how her music came to be. The stories opened up a lot of fans eyes into a deep perspective of this young artist music. Even the poppy summer jam “We’re the Shit” has a better meaning to everyone now, proving that, yes pop is deep. Cady Groves performance is no one way street, it’s an interactive experience. Since it was the end of the tour, they had little pranks going on during their sets, with Hot Chelle Rae walking straight through Cady’s set. In return she did the same.
The kings of the evening of course were Hot Chelle Rae of Nashville, Tennessee. The boys took stage about nine o’clock, opening with track that the tour was named after “Beautiful Freaks” the band kept the crowd going all night. The band then moved into the song that brought them success “Tonight Tonight”. With a mixture of original tracks and fun cover of “Teenage Dream” (originally performed by Katy Perry) and “(If You’re Wondering If I want you To) I Want You To” (originally performed by Weezer). Cady Groves came out and sang Demi Lovato’s part of the bands duet song “Why Don’t You Love Me”. The show become a true dance party when the band performed their smash hit “I Like It Like That”, not a single body in the club was still. Band members Ryan Follesé and Nash Overstreet performed an acoustic song that they called “Emo”, a funny song about you guessed it, everything emo (MySpace, tight jeans, long hair). The band closed the show with an encore performance of “Tonight Tonight”, only this time the fans got to sing to the band. The night was full of exciting memories.