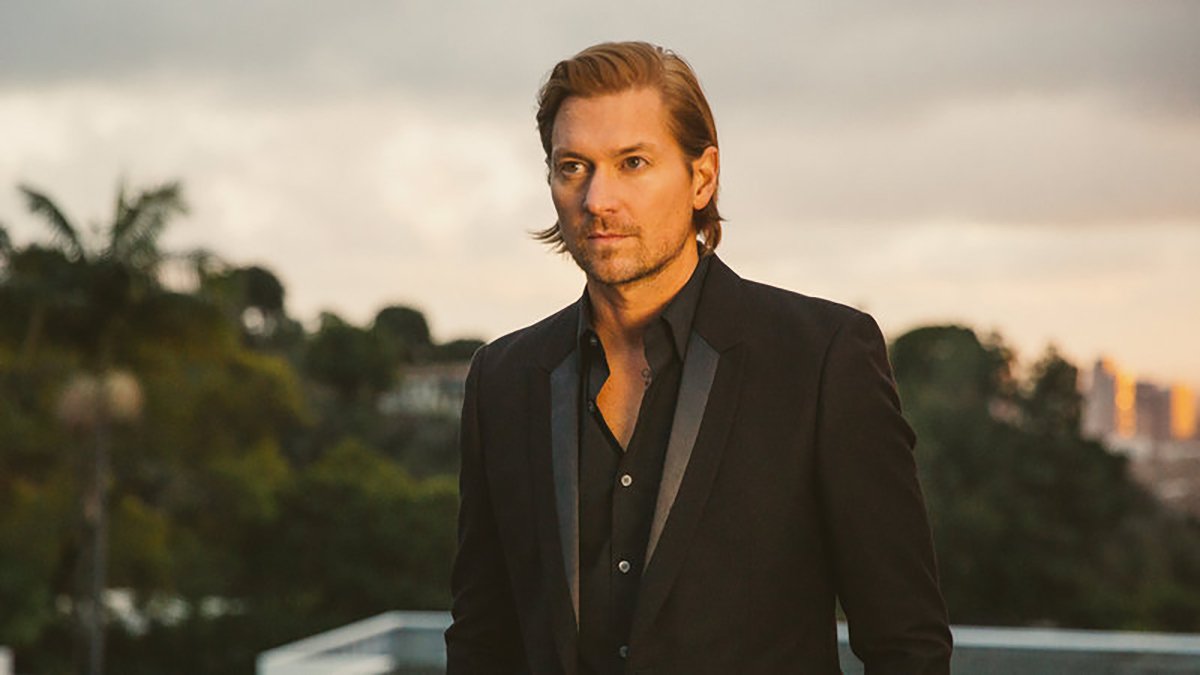 Bear Rinehart, known to many as the frontman and co-founder of the Grammy Award-nominated group NEEDTOBREATHE, has recently embarked on his solo side project Wilder Woods.  An homage to his family and a quest for personal growth, the project has been a journey of self-discovery for Rinehart.  Named after his sons Wilder and Woods, the project has already garnered plenty of praise from the likes of NPR, Magnet, Popdust and Parade, who described the track “Sure Ain’t” as “hauntingly lovely with a delivery that ranges from intense to delicate. Wilder Woods’ quiet confidence is mesmerizing.” “Named after his two sons (Wilder and Woods), it’s a bold project committed to building a brand new sound from the ground up,” raved Earmilk in its exclusive “Electric Woman” premiere, “foregoing the comfort and security he’d built across a storied career in music thus far.”  Rinehart blends an infectious mix of classic soul, R&B and modern pop, blazing his own distinctive trail along the way.  Wilder Woods’ self titled debut album was released on August 9th and was recorded at Layman Drug Company studios in East Nashville with producer Gabe Simon (Dua Lipa/Gin Wigmore).  The album sees backing by a various co-writers and supporting musicians that include The Watson Twins, Jesse Baylin, Trent Dabbs, Carson Cooley, Ian Fitchuk (Kacey Musgraves/Maren Morris), and more.  Rinehart embarked on his Wilder Woods world tour on September 5th in Toronto, which runs through October 28th, ending in London.  Rodrick Cliche & Four20s will be joining him on tour, not only opening the shows but serving as Reinhart’s band, as well.  Staff writer Emily May spoke recently with Rinehart about Wilder Woods, the new album and what’s next for him.  You can stay up-to-date with all music, artist and tour news via the following links.  Check out the tour dates below and make sure to catch Wilder Woods on tour!

You’ve said that Wilder Woods came together during a break in touring with NEEDTOBREATHE in 2017.  What led to you decide the this was the right time to get Wilder Woods going?  Was it something you had been thinking about doing for a while?

Yeah, I think I’d always been thinking about doing a side project/solo record.  I didn’t really know what that was or how big of a deal it was going to be.  There was a song that I wrote for it that really made me want to pursue it more.  As I got into it, it became a bigger thing than I thought it was going to be, but somehow we ended up on a major label with our record.  It was really fun and really natural.  I had always wanted to do this but the time wasn’t there in some ways.

NEEDTOBREATHE has seen such great success as a band over the years, so did you feel any kind of trepidation in venturing off on your own for this project?  What has it been like operating as a solo artist after being in a band with other members for so long?

Yeah, it’s definitely been different!  I’m the boss here, which is nice (laughs).  It’s hard…you know, I think bands are a democracy so things take longer sometimes, and sometimes that’s the best process.  I’ve really enjoyed, though, being out on my own.  Other than that, I really look at this project like I’m playing with house money in a lot of ways.  I don’t put a ton of pressure on certain things, which I think honestly has made the art a lot better and has made it a lot more fun.

With Wilder Woods, you have said that you wanted to work with people who would essentially scare you out of your comfort zone.  What has that journey been like for you so far and what are some things you’ve learned throughout the process?

Yeah, it’s been a lot of fun.  I think when I moved to Nashville a little over a year ago, and started immediately writing and playing with other people, that really pushed me in different ways.  I think the thing I have learned over the years is that when the quietest person in the room makes a comment, it can change the whole trajectory of a song or a record even.  I think the better the people are that you are in the room with, the more often that happens.  It was really fun for me to kind-of go “That’s not what my first instinct was.  Let’s play it out” and I can make a decision on whether I like it or not.  I think the experience of doing that and allowing the process to happen and getting in the studio and not really thinking about music as a means to an end was really refreshing for me.  I feel like a lot of good stuff came out of that.

What can you tell me about the inspiration behind the making of your new album?  You’ve said you didn’t really want to make a throwback album, so how did you go about blending the old school sounds on the album with modern alternative sounds?

I think it was pretty simple really.  It was really hard to find the exact sound it was going to be and what roads we were gong to take to get it to that kind-of alternative, weirder world.  The writing part was like “Let’s write classic songs to start with” to make a foundation for things that you could hear others writing and Ray Charles playing.  We then went about messing it up in the studio and how we were going to present it.  Gabe Simon, the producer, really helped me with that a lot.  We hit on something pretty early on in the production process, and once we had that we kind of felt like everything needed to go through that door into the house, if that makes sense.  We started treating guitars in a way you might treat drums, in terms of sampling and rehearsing things, and screwing around with that in terms of the sound.  We kept it modern, too, but we did it in sort of backwards, different ways and with keys which is sort-of a more analog way to do that.  In the end, just getting in a room with a real band to complete the record was a huge part of it.  Putting real drums and bass on it to bring it to more of a real place makes me more proud of it.

How did you meet and come to work with producer Gabe Simon on the album?

The A&R guy at Atlantic Records told me to go write with Gabe and said “Listen.  You’re probably not going to like him, just so you know.  So be ready” (laughs).   We spent a half a day together and wrote “Electric Woman” which turned out making the record.  The demo for that song really convinced me to have him produce.  He hadn’t really produced any major label records before.  He’s in a band and had done a bunch of other stuff.  I just thought what I do and what he does combined together would really work well.  We compliment each other.  I think our backgrounds and inspirations are completely different, which helped a lot as we sort-of went through the way we write songs and present them.  After that day, we’ve been inseparable ever since which is kind-of amazing since we couldn’t be more different.

Yeah, I think the lyric is a big part of that.  I wrote the lyric outside of music, which I don’t really do very often, in a stream-of-consciousness kind-of thing.  We tried to put that tune two to three times in the record and it never really fit.  We didn’t spend a lot of time on it.  The last day we were in the studio we were working on another track and the guitar feedback made me think of “Light Shine In”.  I’d also been writing the chorus for the song almost as a nursery rhyme for my son.  It was just something that me and him had been singing back and forth.  Somehow, in the period of two to three hours, it turned into what I felt was a statement song for the record.  It was the most Marvin Gaye sounding song on the record.  I think it has an important message that I want to send to my boys and also to myself.

In reference to your sons, what led you to separate the songs on your album into the Wilder songs and Woods songs?

I think when I first started, the big thing is that I thought I was going to make a soul man record.  The songs that I did first were actually the Wilder songs, which sounded completely different…more alternative.  I had a lot of guitar on there.  I wasn’t sure they were going to fit.  There were some ballads that I was playing on my guitar and then these other songs that need a big band.  That was what was the emphasis for it and in the end I kind-of dropped the idea for it when I started realizing that all of these songs could go on the same record.  We sort-of took that wall down, I guess.  But that’s really where it came from, the idea that the writing was so different that it seemed to be two main places it was coming from.

You were recently in Germany and did your first German TV show!  What was that experience like?

It was kind-of insane!  That particular TV show is really insane.  They tape it in a really small pub and I think they tape 3 to 4 to 5 hours worth of material to play a one hour show.  There was a lot of drinking going on and there was a sea shanty choir literally outside the window of the pub who sang something funny, so it was a pretty bizarre experience.  I couldn’t understand any of the jokes.  It was cool though and was a really intimate kind of performance and I can’t wait until it airs.

Yeah.  They’ve played their first couple of shows in the past couple of weeks and the tour is just now starting out.  The band is great.  I’ve known Rodrick for a long time…he’s been out with D’Angelo and Joss Stone and all these people.  I needed a solo band to play with and he was putting together the Four20s around the same time so it really worked out.  They’ve been great and high energy-think James Brown meets Sinatra (laughs)!  That’s what we’ve been trying to cook up and we’re getting there.

What’s coming up for you after tour?  What’s next for you?

I’ve been working on this record for a long time.  My plan is to tour again in the Spring and then do summer festivals and all that.  At some point there will be a NEEDTOBREATHE record that we’ve been cooking up for a while, but I’m going to tour the Wilder Woods album for a while.

Thanks so much for taking the time to speak with me today!

Of course.  Thanks for having me.