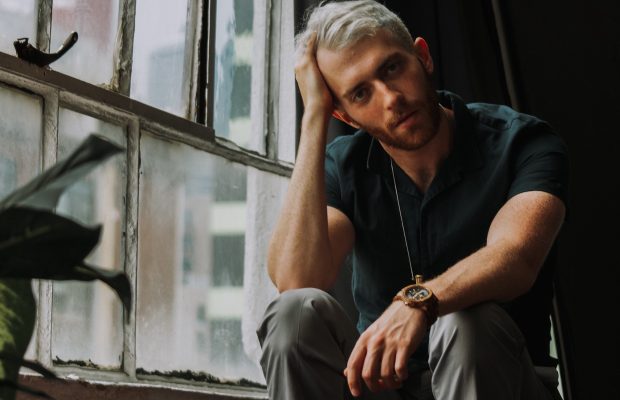 In life, sometimes where you begin is where you belong.  A few years ago, singer-songwriter Jake Benjamin made a left turn from his core self of being a musician that sent him on a winding, self-reflective odyssey through states and states of mind.  He released his debut album Finally Back Home in July of 2018 and today sees the release of his new single “Bound To You”.  Benjamin had this to say about the track: “The story of “Bound to You” came from a stream of consciousness writing session.  I was already assigned with composing a vocal loop pedal tune for a studio concert in grad school, and the week after the studio concert, I had gotten back from a date that didn’t go anything further from that night.  I was in my room in Indiana at around 1AM sitting with just one lamp on thinking about what it would feel like when I met the one. The thoughts that raced through my head got so vivid that they became a vision projected on the ceiling and from there I kept on writing and writing and by 3AM, the song and melody had been writing with the composed vocal loops. “Bound to You” is a song dedicated to the ones who never leave your mind and love unconditionally.”

Jake is one of those rare gifted artists that early on could sing better than they could speak.  Yet, when it came time to go to college, Jake decided to pursue a career as a music business professional and chose not to fine tune his prodigious talents.  However, while in college, Jake became reacquainted with songwriting and discovered the beauty of jazz.  “I fell in love with the fact that music could be an exchange of energies between two people,” Jake shares.  The New York-based artist earned his bachelor’s degree from University of Miami’s Frost School of Music’s Music Business and Studio Music & Jazz programs, and earned his master’s degree from Indiana University’s prestigious Jacobs School of Music where he studied voice.  Because of this formal training, core to Jake’s aesthetic is his sophisticated harmonic compositional vocabulary.  During his studies, Jake has been fortunate to share the stage with renowned artists like Tierney Sutton, Darmon Meader, James Newton Howard, Kate McGarry, Cyrille Aimée, and many more.

Jake tempers this studied musicality with adventurous artistic explorations via a loop station.  His innovative approach with this technology treats the loop station as a compositional tool through which he explores the possibilities of vocal layering, beatboxing, and body percussion.  “I write original music for the millennial wallflower, and I reimagine jazz repertoire to make tunes my own. The stories in my songs are about me, or somebody I know.  I don’t like to make up stories of things I didn’t go through,” Jake says.   These days, Jake is in New York music making within a community of musicians and friends.  His next release, however, will showcase his solo artistry with a collection of songs themed around Vincent van Gogh.  These recordings will highlight concepts of the psyche, the human condition, and they will showcase Jake’s innovative use of his looper station.  You can follow Jake Benjamin and stay up-to-date with all upcoming music, artist and tour news via the following links: