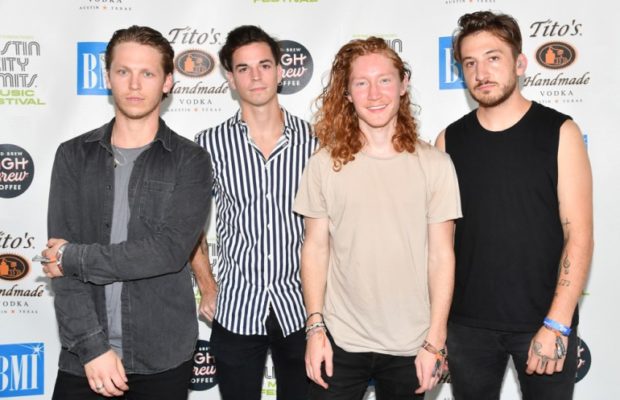 (Photo by Erika Goldring for BMI)

The second day of the Austin City Limits Music Festival was delayed by stormy weather. When I arrived at the park it was thankfully no longer raining, but the threat of a storm still lurked in the background. Metallic was performing that evening, though, so thunder and lightning was at least on brand.

The first set of the day was Japanese Breakfast at the Barton Springs stage. I noticed many well dressed people lounging on blankets waiting the performance. You might think that Japanese Breakfast would be a zen time (I did), but you’d quickly be proven wrong. Five minutes before the performance people began to perk up in anticipation. This was my first time seeing Japanese Breakfast, the brainchild of Michelle Zauner, and I couldn’t imagine seeing them on a stage any smaller than the one at Austin City Limits. They opened the performance with “Diving Woman,” a song that, like the rest of the set, was filled with power. Zauner dressed in gold and black sheer dress, before tossing it to the side like a real badass. One of my favorite movements of was a cover of the Cranberries “Dreams” that worked perfectly for Japanese Breakfast’s delicate and dreamlike sound. This is going to the be one of the last Japanese Breakfast performances for a while before Zauner goes to work new music. I’m excited to see what’s next.

After I did my interviews for the day, the next band I checked out was Flor. Flor took the BMI stage which showcased a lot of young up-and-coming artist for the event. “They’re like nineteen or something right?” I overheard a mom asking. She was wrong, but like, I get it. One of the younger artists showcased at the prestigious festival, Flor played for mostly teenagers and their parents. And me. Flor is band I’d heard about for the longest, because I knew three of the members (McKinley Kitts, Zach Grace, and Dylan Bauld) from their previous band. I actually remember them fondly as the first band that let me shoot side stage. Since then, Kyle Hill joined on drums, the band became Flor, and they were signed with one of my all time favorite labels, FueledByRamen.

One of the few more pop rock presences at the festival, Flor was refreshing and familiar to me. I love all types of music but I’d be a liar if I did not admit FBR and Warped Tour raised me. As I watched the performance and listened to the band play songs from their debut album come out. you’re hiding. their presence at Austin City Limits didn’t feel out of place. With a lot of indie influences, Flor is captivating to watch. Like Japanese Breakfast, they announced that this will be the end of their current era, but the band is already set to tour with Andrew McMahon next January.

What could I say about St. Vincent that hasn’t already been said. It’s St. Vincent, that’s all. St. Vincent is a rock star with the music of a pop star and the brand of the coolest girl at art college. This is my second time seeing Anne Clarke dominating the stage in red latex. My first time seeing her was earlier this year on the “Fear the Future Tour.” It was impressive to see her condense the performance I saw earlier this year into a smaller set complete with dancers in morphsuits and amazing video images behind her. The Texas native has performed ACL before, so I asked my friend Zach, who was accompanying me for this show, how she was in previous years and he said that she was just as amazing.

St. Vincent’s performance was too captivating to be topped, but I still wasn’t ready to go home. I was only going to be at ACL for one more day, so while people ran over to Metalica or JUSTICE for the evening I thought I’d take a breather and check out the “Silent Disco.” This event consisted of headphones connected to three DJs spinning three stations. It was a fun moment to dance. The line was rather long, but  I still recommend checking it out. It’s a fun option if you’re in the mood for dancing or a more nightclub feel. It was also very popular with the teens. It was a delightful way to end my second day at Austin City Limits.